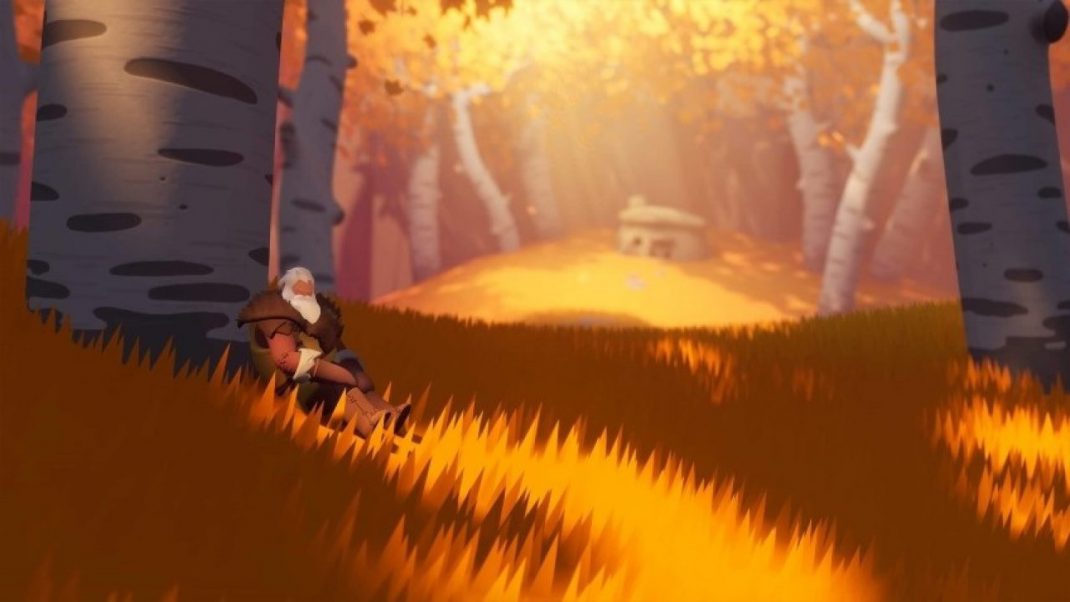 In a time where online first person shooters and battle royal games dominate the market, Arise: A Simple Story invites both new and veteran gamers to take a step back to a simpler game style and as its namesake – a simpler story. Arise was released digitally December 3rd, 2019 on Xbox One, PlayStation 4, and the Epic Games Store.

Arise has a very somber start, with the screen opening upon what looks like a Viking funeral. As the older gruff man is lit on fire the screen transitions to him waking up in Snow with indication to use right stick to move. Thinking this would move my character, I was pleasantly surprised to see that this control commanded the sky, not the body. With this motion the player is able to manipulate time back and forth. This is put to interesting use in the first level to change the landscape from a frozen snow landscape to spring flowers and back.

As a haunting voice commanded “arise” with soft piano melody as backup, I knew that this was where my story was to begin. I was now in command of this man who appeared to be at the end of his own story. With no backstory or idea of where to go, I set off to the first snow covered level. The game left me to explore with only simple control hints appearing on screen when I reached an insurmountable obstacle. On the Xbox the left stick controlled the player with the A button as a simple jump motion. The right stick then controlled the sky, or “time” both to rewind and fast forward. 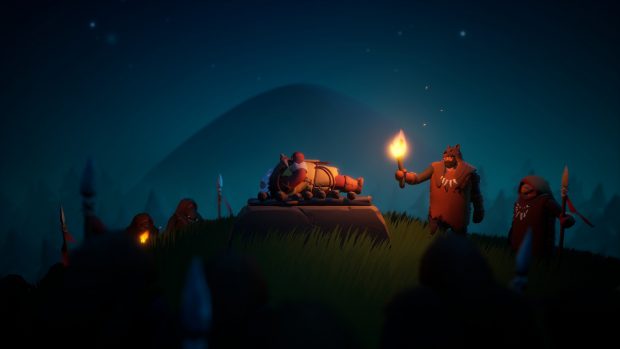 As I aimlessly wandered about the first snowscape playing with the time speed controls I was pleasantly surprised to see puzzle solving elements woven into the game itself. Instead of the generic “move block into space to solve” kind of puzzle, the game focused on obstacles that stood in the way of your advancement. These puzzles required the use of the time control to make the snow melt into water to lift wooden tree trunks to higher ledges, command the sun to shift the direction sunflower platforms faced, and rewind falling rocks from a cliff face. Although the game lets the player choose their own pace to explore, there is a set path that the game guides you to with stone markers indicating an element of the story – of the man’s life. It didn’t take long to understand that this game was about the journey, not the destination.

The lack of text and simple controls makes this game highly accessible to all gamers. Though the gameplay and repetitive obstacles soon became monotonous and at times felt like the memory cut scenes were placed too far apart from each other. This made the game seem to drag on and become a race to get to the next area to advance more of the story. This story is derived from what the player puts together from flashback cut scenes, the music tone, and “memory drawings” that can be found hidden throughout the stages and marked by butterflies. These memory Easter eggs give the game more of a collecting completionist feel to the game, but if you don’t mind having the full story can easily be ignored and overlooked.

As the game goes on, you realize your character is a man who has lived a long, complicated life. Each small discovery is something that you as the player are witnessing for the first time but as the character are reliving as lost memories that even he has forgotten. The game does an amazing job of painting contrasting levels that showcase both the joys and sorrows of a life. The small sweet moments are set against contrasting levels filled with sorry and despair. The first chapter of the game brought me to tears, and the lightning filled level titled “Alone” stirred up self-reflection and fragments of my own life that I was finding myself adding onto the character. The lack of dialogue and written story lends itself to the player creating their own story and adding their own human element into this game that ended up being both an exploration of the character’s life and a look into my own. 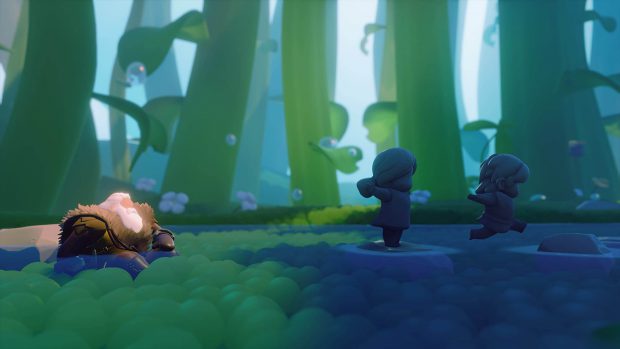 After a couple hours of solo play, I decided to dive into the two player mode option. I was curious to see what this second player could add to the experience but was instantly let down to see that it just split the controls, myself having control of the character and the second player manipulating time. With the addition of a second player the game instantly lost its intimate feeling and became just a platformer where poorly timed jumps and miscommunication with the second player became comical and tedious. This is definitely a game better suited for one player, but it was interesting to see that it offered the ability to share the experience more with the person beside me.

It is easy to say that the game trailer had me hooked instantly. Sadly the trailer has the problem of showing the “greatest hits” of the game, these striking moments that when played through lost their power as I realized I had already seen them once before. The downfall is that Arise is the type of smaller game that needs a hook to get people interested in picking it up, and while the trailer did just that, the game itself seemed to lack in new emotionally stirring sections. I recommend giving the trailer a quick watch and picking it up if it tickles your fancy. It isn’t a game for everyone, but it is a game that will definitely stick with me for a while and my own memories that it stirred up along the way.