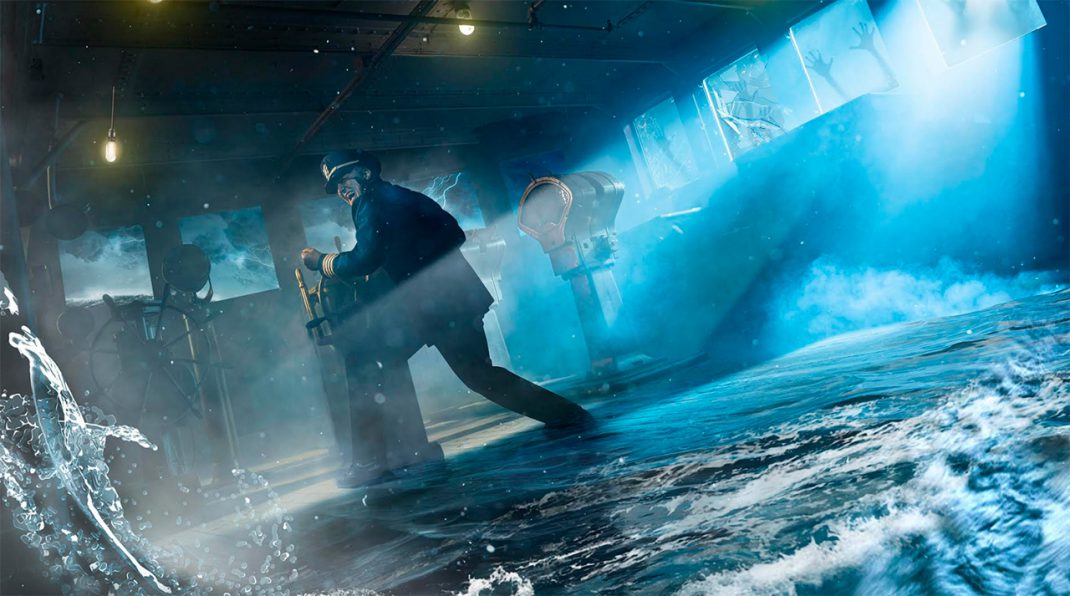 LONG BEACH, Calif., (August 4, 2019) – Brace for impact as The Queen Mary’s Dark Harbor releases a storm of fear like no other in the all-new maze: Rogue. Dark Harbor’s newest maze will take guests through the frightening voyage that nearly changed history. Sparking the creation of the Hollywood blockbuster The Poseidon Adventure, the 95-foot wall of blackness sent waves of panic through the marine community and re-defined science as we know it. All who dare will grasp for air as they plummet with fear, clinging to survival in the newest, spine-chilling maze.

As the tale goes, while transporting American troops during World War II, the RMS Queen Mary became known as the Grey Ghost. During a stormy December crossing from New York to Scotland, the famed ocean liner was broadsided by a monstrous force of nature: later classified by NOAA as a “rogue wave”.

Dark Harbor attendees will roll into the tide of this historic moment by becoming fully immersed in the panic and chaos of Rogue’s impact with deafening water effects, complete darkness, floor to ceiling seafoam, and even experience the feeling of being capsized. All those aboard will hold on to dear life, as the Grey Ghost attempts to keep herself afloat.

In addition to the announcement of the all-new maze, the producers of Dark Harbor announced at Midsummer Scream, on Sunday August 4, for the first-time ever, Dark Harbor guest will have access to never-before-seen depths of the Queen Mary. In one of the newly re-imagined mazes onboard the historic ocean liner, attendees can now walk through the infamous Door 13. Dubbed one of the most haunted areas on the ship, legend has it that an 18-year old crewman was crushed to death by Door 13 in 1967, and now Dark Harbor guests can walk-thru the iconic location. Guests can also venture 6-fathoms below sea level submerged in the notorious Boiler Room to indulge in the newest secret bar offered at Dark Harbor nightly.

Southern California’s most haunted Halloween event will welcome MORE scares than ever before with the season’s most authentically frightening experience available. Dark Harbor tells the truly haunted, historic tales of the Queen Mary through the infamous spirits of Captain, Chef, Iron Master, Samuel the Savage, Graceful Gale, Half-Hatch Henry, Scary Mary, Voodoo Priestess, Ringmaster, plus hundreds of their bloodcurdling henchmen await to tempt your fate.

Live your nightmares aboard the Queen Mary with newly-intensified returning mazes Feast, B340 and Lullaby. Circus and Intrepid prove even more twisted and darker than before with new immersions and even more twisted scares for the 2019 season.

The annual haunt opens its gates on September 26 and continues to scare those who dare on select nights through November 2. General admission ticket prices start at just $20 online, with Fast Fright, Evil Express, RIP Lounge Passes, Creepy Cabanas and lodging packages available. Dark Harbor is offering a 40% discount on general admission for select nights until August 5 at 11:59pm with promo code SCREAM. For more information or to purchase tickets online, visit www.queenmary.com/dark-harbor.