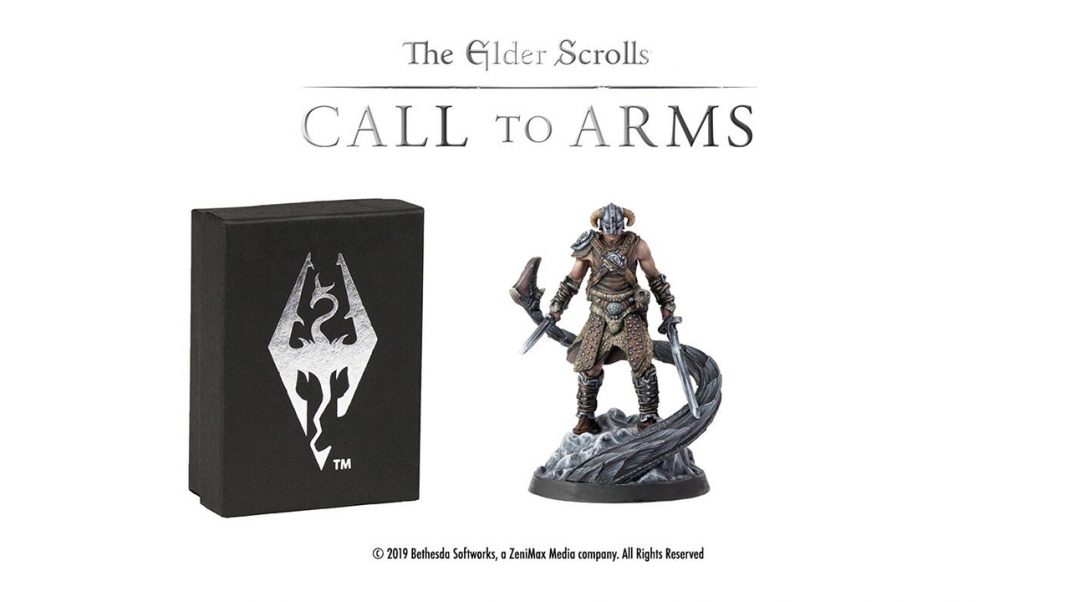 LONDON, ENGLAND, May 20th – Modiphius Entertainment is proud to announce a new narrative miniatures game based on The Elder Scrolls®, the legendary videogame franchise by Bethesda Game Studios®.

The Elder Scrolls: Call to Arms – Tabletop wargaming in the world of Tamriel

The Elder Scrolls: Call to Arms builds on the core mechanics of Modiphius’ Fallout: Wasteland Warfare game system, but has been rewritten and reworked by designer Mark Latham (The Walking Dead: All Out War, The Harry Potter Miniatures Adventure Game, Editor White Dwarf Magazine) to suit the world and inhabitants of The Elder Scrolls franchise.

As well as controlling their troops, players will also need to manage the stamina and Magicka resources their models bring to the table, all the while watching out for hostile AI driven enemies and narrative events that can change the flow of battle. Players can play against each other or team up (or play solo) to take on all manner of creatures and adversaries driven by Modiphius’ advanced AI system.

The game will feature scenarios ranging from dungeon delves, where you seek out lost treasure, to running battles across the ruined outposts that dot the landscape of Tamriel, all the while fulfilling quests and narrative-driven scenario objectives that will see your band of heroes grow from game to game. Will you claim the ruined fort as yours and build your own settlement, or wander the countryside clearing out foul ruins of the stench of your enemies?

In the first wave, players will raise their banners in the fight for the future of Skyrim as they lead the forces of the Stormcloaks or Imperial Legion in the battles of the civil war. Forces will typically comprise 1-6 heroes and 3-15 troops. The first wave of releases will be a Two Player starter set and reinforcement sets of resin miniatures for both the Stormcloaks and the Imperial Army, a Dragonborn single player set, but more races and characters from across the Elder Scrolls stories are planned. A host of accessories like metal tokens, deluxe dice bags, settlement journals and more will expand your options. Planned releases will expand on The Elder Scrolls V: Skyrim®, as well as adding releases from The Elder Scrolls IV: Oblivion®, The Elder Scrolls Online®, and more.

Modiphius plans promotional miniature releases in the lead up to the launch, starting with the iconic Dragonborn miniature, available right now in limited quantities from Modiphius.net, or pick one up at the UK Games Expo show in June, or GenCon in August. More special editions will be released through the year and will be available again after release.

The Elder Scrolls: Call to Arms will be available from Christmas 2019. For more information and to sign up for news, visit: www.modiphius.com/Elder-Scrolls