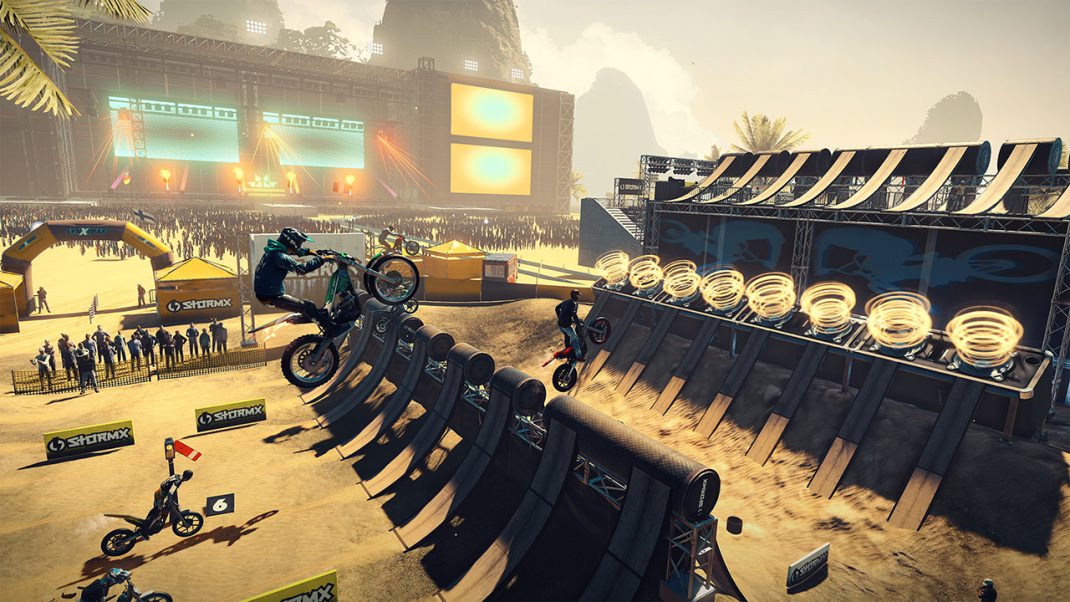 No other game gets me leaning on my couch like a good Trials game. Whenever I play a Trials game I find myself physically moving as if I was actually riding the bike, just to get that extra inch to make it over a barrier or to clear a huge canyon. I have played every game in the series and always look forward to the challenges that the next edition will bring. It took a few years, but RedLynx and Ubisoft Kiev have finally come through with a new version of Trials with Trials Rising. Let’s take a deeper look into Trials Rising to see what has changed in this 19-year-old franchise.

Trials games don’t usually come with a story, Trials of the Blood Dragon being the one notable exception, so there isn’t much to go over here except how the game is laid out. In the single player mode, you begin in North America with the easiest tracks to complete. After completing a few of these earlier tracks, you unlock the Trials University. Trials University is a prolonged tutorial that helps newer riders discover the intricacies of the Trials franchise. The levels in Trials University will unlock as your rider gains levels, this will mean that the skills you learn in Trials University will be fresh in your mind when you need them. 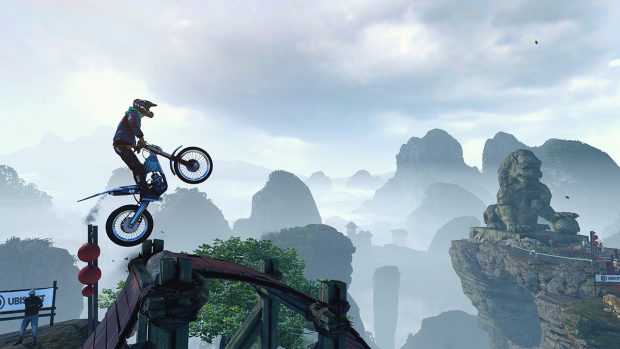 Progressing through the continent will also unlock the Stadium Finals and Sponsorship Contracts. The Stadium Finals are races where you race against 3 other players’ ghosts to see who can reach the finish line first with the fewest faults. The Sponsorship Contracts are generally fun and will help unlock cosmetic items for your rider and your bike.

Unlocking everything in the beginning was extremely easy. Completing the trails at the gold level was easy for me since I have played Trials in the past, but unlocking new stages isn’t based on the level that you completed the previous stage but your rider’s level. You could have reached gold on every race, but if you do not meet the level requirement then you cannot progress until you do. This change, for me, is Trials Rising’s biggest misstep.

Trials Rising does introduce a new test to your friendship with the new tandem bike. With the tandem bike, two players can play locally on the stages and each player controls half of the bike’s momentum and balance. This mode is a great addition to the series and brings a whole new look to the stages. Trying to get two people to work together on one bike isn’t easy, but when you complete a harder stage the feeling is great. 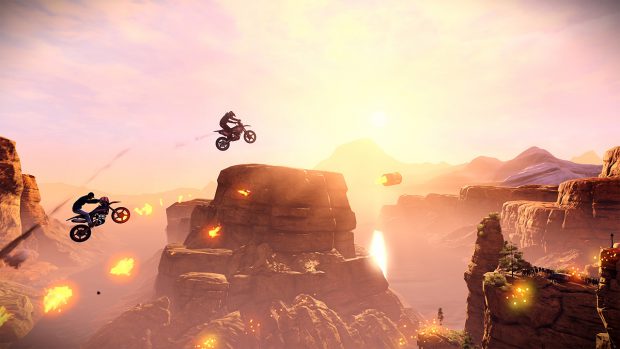 What isn’t so great is the loot box system and some of the custom items that you can get. As you level up, you gain loot boxes like what you would find in Overwatch or Apex Legends. A loot box will get you 3 items, which can be an item for your rider, your bike, a sticker, or a pose that will show up on the loading screens. For my first pose, I got the infamous butt-slapping taunt which wore out it’s welcome within the first hour due to the change in music. I like getting items to customize my rider and make it different then the other riders on the screen, but loot boxes have always felt cheap to me and they feel cheap here too.

Trials Rising looks fantastic on the PC. The levels are interesting, both game play wise and visually stunning. I found myself enjoying the lighting effects as the sun poked through the trees near the track, or the way the Eiffel Tower looked as you slowly climbed up it’s massive girders. The lighting effects on the PC make Trials Rising really pop.

Sound effects and music are exactly what you would expect for a Trials game. The music is fairly solid for the most part, featuring artists such as Anthrax, Motorhead, Stone Temple Pilots and Jurassic 5. There was a lot more artists on the soundtrack that I had never heard of, but that’s not to say that the music was bad. I still remember playing games like Tony Hawk Pro Skater where I loved almost every song and artist on the soundtrack. There are some hits here, for certain, but also some misses.

Trials Rising hits all the right marks to make it another great Trials game in the series. While I may complain a little bit about the rider level making the second part of the game a huge grind to unlock stages, the overall game play of Trails Rising is exactly what we need in another Trails game. The addition of the tandem bike is a great way for two people to get into a brawl on their couch, arguing over who it was that wasn’t leaning the right way. The stages are some of the best designed that has come out for the entire franchise, and that is saying something. If you can look past a sizable grind to unlock some of the stages, then I would highly recommend Trials Rising, especially on the PC. Trials Rising is available now on Seam for $29.99. 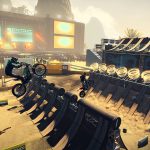