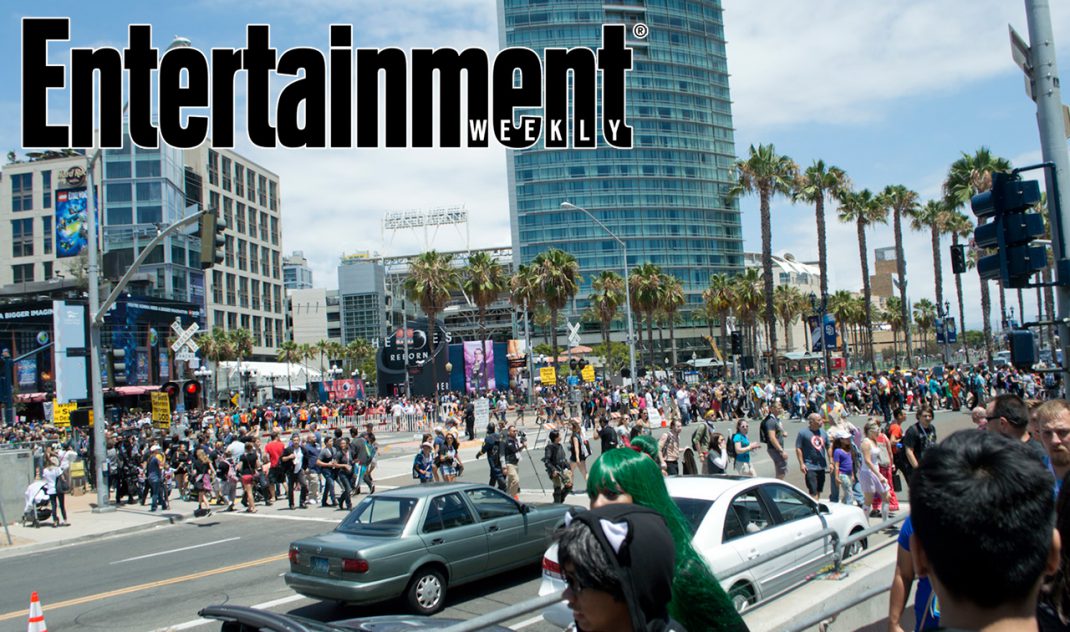 The EW Video Studio at the Hard Rock Hotel, in partnership with Facebook, will once again be the ultimate talent destination. EW.com and EW’s Facebook page will exclusively livestream non-stop video content and commentary from the convention, offering fans immediate and intimate access to Comic-Con’s biggest stars. Viewers can get in on the festival action on Facebook Watch as EW’s award-winning writers and editors interview the TV and film industries’ biggest names from EW’s Video Studio.

“We’re beyond excited to be back at Comic-Con in a big way this year,” said Henry Goldblatt, Editor in Chief, Entertainment Weekly. “Our partnership with Facebook is a terrific opportunity to amplify EW’s video content to an even wider audience. Comic-Con focuses on all genres of entertainment – and so do we. And it’s a celebration for the fans which makes it incredibly special.”

EW’s “Inside Comic-Con,” a free bonus issue, will be distributed by street teams on the ground in San Diego throughout the weekend, and will be available beginning Thursday, July 19. The cover story, written by EW Editor at Large, James Hibberd, is a must-read for Comic-Con attendees. Additionally, EW’s always-popular Comic-Con preview double issue, jam-packed with sneak peeks of some of the most highly anticipated TV shows and movies including a First Look at the new Doctor Who, featuring Jodie Whittaker as the first female Doctor, will hit newsstands nationwide on July 13.

The EW Studio will be a one-stop shop for the leading TV and film stars to promote their upcoming projects. For the sixth year, SiriusXM’s Entertainment Weekly Radio channel will air interviews and coverage with SiriusXM hosts Dalton Ross, Jessica Shaw, Julia Cunningham and Kyle Anderson. Entertainment Weekly Radio’s Comic-Con broadcast will begin Thursday, July 19 at 2:00pm ET and will air through Saturday, July 23 on SiriusXM channel 105.

Brave Warriors, a laugh-filled discussion with today’s male heroes including Benedict Wong (Deadly Class), Dylan Bruce (Midnight, Texas), Santiago Cabrera (Salvation), Tom Ellis (Lucifer) Jay Hernandez (Magnum P.I.), and Eoin Macken (Nightflyers). During this annual panel, topics will include the thrill of playing iconic characters, the sometimes awkward encounters with fans, and the highs (and lows!) of a career in Hollywood.  Moderated by EW Editor at Large, Lynette Rice the panel will take place in Ballroom 20 from 2:15-3:15pmon Friday, July 20.

Women Who Kick Ass, a discussion among fierce, fearless actresses featuring Jodie Whittaker (Doctor Who) Regina King (Watchmen), Amandla Stenberg (The Darkest Minds), Chloe Bennet (Agents of S.H.I.E.L.D.), and Camila Mendes (Riverdale) opening up about the power and privilege of playing women that redefine the rules and refuse to yield. Moderated by EW Radio’s Jessica Shaw, the panel will take place in Hall H from 4:00-5:00pm on Saturday, July 21.

Entertainment Weekly and Marvel will host an intimate “After Dark” evening event in the EW Studio on Friday, July 20 with casts from Cloak & Dagger, Iron Fist, Agents of S.H.I.E.L.D., The Gifted and Marvel Rising.

Finally, no Comic-Con experience would be complete without EW’s legendary closing night party on Saturday, July 21. The poolside fete, presented by HBO, will once again take place at FLOAT at the Hard Rock Hotel and will attract some of Hollywood’s biggest film and television talent in a celebration of all things pop culture. This year’s highly anticipated party will feature two of everyone’s favorite HBO shows, a Game of Thrones photo op and cabanas themed around Westworld, along with tunes from DJ Michelle Pesce.