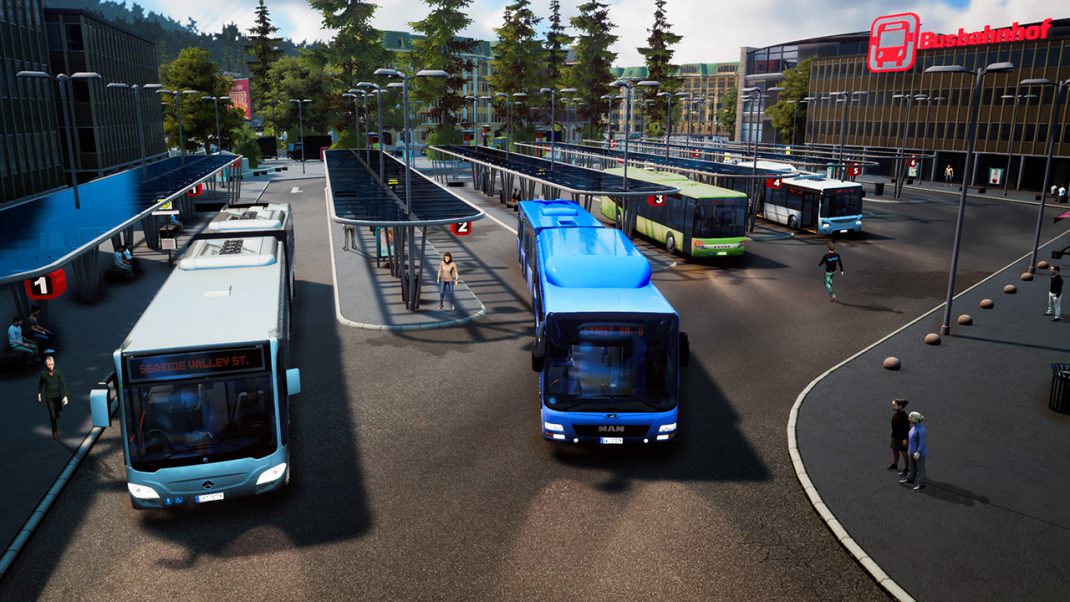 Moenchengladbach/Germany, June 05, 2018 – Just a few days left until the release of the highly anticipated Bus Simulator 18 – the perfect time for astragon Entertainment GmbH and the developers of stillalive studios to grant players a deeper insight into a wide range of exciting features to be found in their new bus simulation game for PC – some of implementations of requests by the Bus Simulator community itself. The new features include such important gameplay elements as a synchronous multiplayer mode, the company management, the progression system, special in-bus events, day and night drives, weather conditions, the support of alternative control systems such as TrackIR and Tobii Eye Tracker as well as an expanded modding support. All of these will offer countless new and advanced gameplay opportunities to bus and simulation fans alike.

In Bus Simulator 18 players will get the opportunity to create their very own bus company either solo in single player mode or together with up to three friends in multiplayer mode and lead it to success in the fictional European city of Seaside Valley. During the course of the game they will be able to access and drive eight officially licensed and lovingly recreated bus models by worldwide renowned brands. Right at the start of the game the players will be able to take a seat in the cockpit of a maneuverable city bus with which they will create their first bus lines in the outskirts of the sprawling metropolis. By successfully completing routes and missions they will be able to increase their company’s reputation, earn experience and money which will in turn enable them to unlock more city districts and buses.

In comparison to Bus Simulator 16, Bus Simulator 18, which has been developed using Unreal® Engine 4, will come with a map that is 2.5 times bigger than that of its predecessor and also show considerably improved graphics and many new gameplay features.

These include driving during different daytimes (also at night) and under various weather conditions as well as a wide range of new special events. These can be roadworks blocking off routes, traffic accidents, passengers blocking the doors, listening to loud music or leaving trash or valuables behind requiring prompt intervention by the driver and many more.

The city of Seaside Valley consists of 12 different districts. In addition to the Old Town, various city areas and suburbs, this also includes remote villages, a business park as well as an industrial zone with affiliated harbor district. In Bus Simulator 18 players can therefore look forward to overland tours, drives along highways, roundabouts and railway crossings for the first time in the history of the Bus Simulator series.

The expansion of the bus company’s route network will be possible with the help of a route editor that has seen significant enhancements in comparison with the one present in Bus Simulator 16. The new editor will offer players more freedom when it comes to planning their routes and will give them even more opportunities to create routes that encompass the whole city. It will also be possible to freely change already finished routes anytime.

While driving, players should however not only keep a sharp eye on their time schedule and current traffic conditions. Next to observing traffic rules and the timely transport of their passengers, bus drivers will also have to pay close attention to speed bumps and potholes so that their customers will arrive at their destination safely and comfortably. This will of course be beneficial to the reputation of their bus company and career.

Next to the public image of the bus company, all bus stops of Bus Simulator 18 will be included in a progression system. This means that frequently used stops will increase by and by in rank and gain popularity, which in turn will lead to an increase in passengers who like to use them as the starting point of their journey. In addition to their own tours players will also be able to take care of expanding their bus fleet and manage employed drivers. The salaries of the employees differs depending on their qualifications, whereby experienced bus drivers will be able to complete their routes significantly safer and therefore earn higher revenues. Beginners for their part keep steadily improving their skills by gaining more experience trip per trip. Players should consider carefully which driver they want to hire, and which routes to assign to that driver.

Should bus company owners cross paths with their staff during the game they will of course be able to see each other’s buses and flash their headlights as a greeting. It is also possible to enter the buses of other drivers and hitch a ride.

Players who enjoy giving their buses a personal touch can look forward to the extensive customization options in Bus Simulator 18. They will be able to choose not only from different color bases but also from a wide range of patterns, decals and even complete all-over skins.

Even more creative freedom will be offered by the modding support feature of Bus Simulator 18. With the help of the game’s modding kit, available in the Steam Workshop at launch, players will not only get the opportunity to create new buses but also completely new maps and cities, which they will be able to share with other bus fans via the Steam workshop.

All players, who would like to use more than their mouse and keyboard to control their buses, will be happy to know that Bus Simulator 18 will support most common steering wheels and gamepads as well as tracking systems such as TrackIR und Tobii Eye Tracker. Another first for the popular simulation series. There will also be a wide range of options for the individual setup of their control devices. Players will in addition be able to choose between a simplified or realistic game mode.