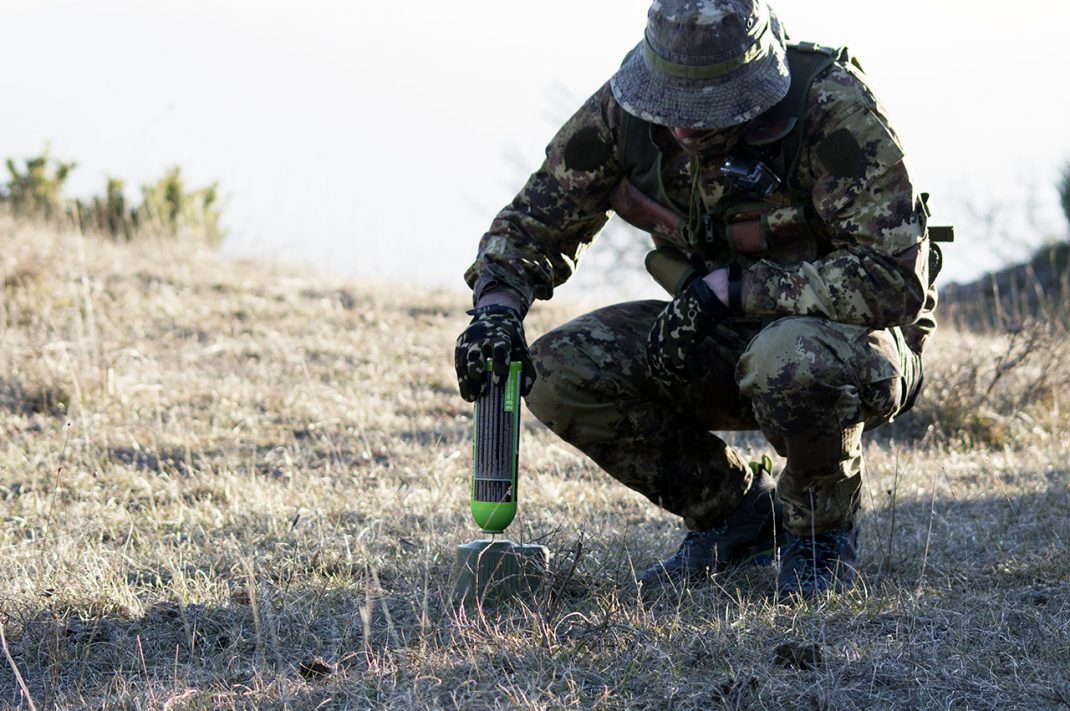 April 10, 2018 – Military technology moves quickly, while that of airsoft doesn’t fit the current technological development at the same rate. A lot of not-working or unrealistic mines are available on the market, and almost all of them work by a pressure trigger. There cannot be any hope to hit the target with a single mine in a vast playground. Hence the idea of Enimine, a technological and innovative bouncing land mine for airsoft, with remote trigger by a microwave radar and the total coverage of a perimeter of about 10 meters.

The project, developed by idea3Di, has just landed on the Indiegogo website for the launch of a crowdfunding campaign, which will allow to produce it on a large scale.

But how is Enimine made?

Enimine is mainly composed of three parts: the bouncing mine, the launch base and a RF remote control. Unlike other common land mines, Enimine has a microwave radar which can be activated with an RF remote control; it detects movements in a PERIMETER of about 10 meters and it triggers the launch and, subsequently, the detonation of the bouncing mine filled with gas and BB’S.

The gas shoots BB’s in all directions up to a distance of about 7 meters. Moreover, the bouncing mine is reusable. To make it even more realistic, Enimine has been equipped with a disarm
system: just hit it for 3 times and it will trigger and detonate. And through the RF remote, it can be deactivated or triggered instantly. Enimine can be buried for ¾ of its body and the whole system is powered by a rechargeable Li-Po 7.4v battery.

“We created this team – explain the designers – to develop a series of technological and innovative projects. Enimine is part of a long series of works we are doing together. We chose again the crowdfunding to test how much our product can attract the users’ attention. What we want is to see our ideas carried out and we would like to invent many more. That’s why we think crowdfunding seems the best way “.

The design process began by developing the release mechanism, the gas compression system and the electronic board, three essential steps for the feasibility of the project. Drawings processed on the PC, then taken to the third dimension through several 3D prints, allowed to perform the first tests. During the second prototyping phase, prototypes were made in aluminum and steel by CNC machines both for a resistance matters, both to carry out the best tests about efficiency and functionality. Tests that allowed to see their product grow from time to time and, therefore, to improve it.

In the third phase, Enimine was field tested, with optimal and surprising results.

“We’re working on Enimine for about 2 years – says the idea3Di Team – but we play Airsoft for more than 10 years. Our passion for this sport led us to create something that was still missing and that players will no longer be able to do without.”

Such an accurate prototyping process, combined with the study of several production techniques and the assembly of different materials – such as metals and plastic – allowed the idea3Di to overcome the limitations met during the creation process and to get a perfectly functional product tested to last. There are those who, having previewed and tested it, said about Enimine:

“Very useful for players and effective in every situation. A big step forward for the Airsoft.” Proof is in the pudding!