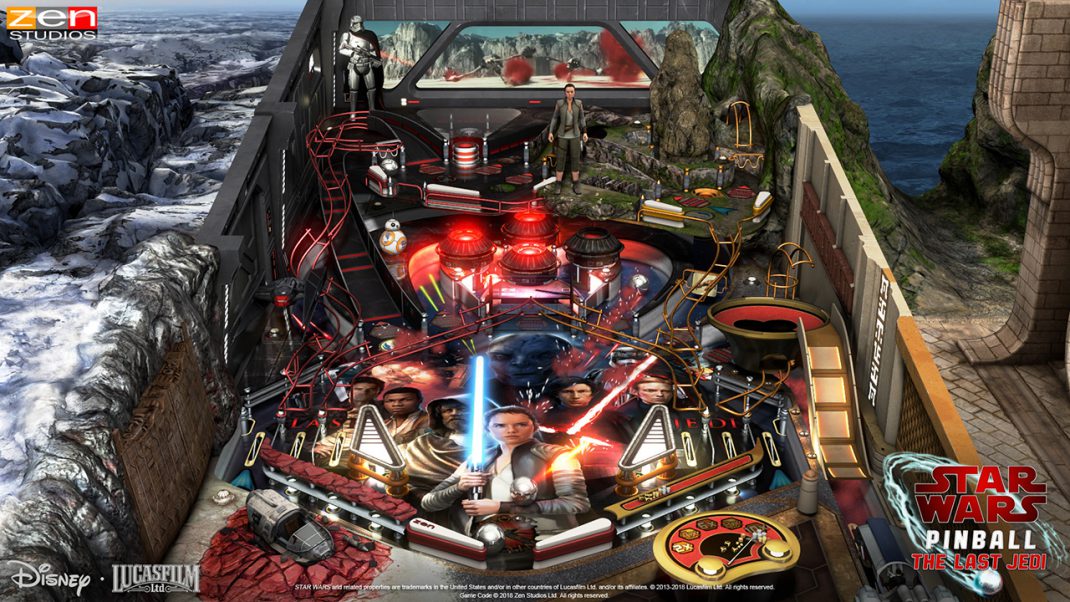 San Francisco, CA – March 29, 2018 –  Today, Zen Studios announces two new exciting tables based on Star Wars™: The Last Jedi™, coming to Pinball FX3 on April 17. With one table based on the overall plot of the film and another more focused on Luke Skywalker’s hideaway on Ahch-To Island, the Star Wars Pinball: The Last Jedi pack will be available for download on PlayStation 4, Xbox One, Steam, and Windows 10, as well as on the App Store, Google Play, and Mac through the Zen Pinball and Star Wars Pinball apps.

Both tables in the Star Wars Pinball: The Last Jedi pack reimagine memorable moments from the film in an interactive way only Pinball FX3 can deliver, from fast-paced pinball action to an advanced leaderboard system and RPG-like progression. Sound effects straight from the film complement an authentic Star Wars soundtrack, as animated 3D models bring everything to life. Join Luke Skywalker, Rey, Finn, Chewbacca, R2-D2, BB-8 and Captain Phasma—even Porgs!—in galaxy-spanning antics from the far reaches of the Outer Rim to Luke’s hideaway in the Unknown Regions.

Star Wars: The Last Jedi – Survive a First Order onslaught as the Resistance, train Rey in the ways of the Force on Ahch-To, and defend Finn from Captain Phasma, blasting away at stormtroopers as BB-8. Jump a ramp to shoot down TIE fighters, fight off Kylo Ren’s TIE Silencer, and teach Rey that the Force isn’t just moving rocks!
Star Wars: Ahch-To Island – Luke Skywalker (reluctantly) welcomes you to his secluded hideaway. Train Rey in the ways of the Force, convince Luke to join the Resistance and help Chewbacca deal with some Porg problems. You’ll even get a taste of everyday life on the island as Luke, including reminiscing about his Rebellion days through R2-D2’s hologram projections. And when the lights go off during a multiball mode? Let’s just hope the Force is with you…
“We at Zen are happy to celebrate five years of making fan-favorite Star Wars Pinball tables,” says Mel Kirk, VP of Publishing at Zen Studios. “Once our Star Wars Pinball: The Last Jedi pack is released, players will be able to choose from no fewer than 16 robust tables set in that iconic galaxy far, far away. We’ve built an incredible community over the years, and we hope to keep pleasing them through Pinball FX3 for years to come.”

For more information on Star Wars™ Pinball: The Last Jedi™ as well as the rest of Zen’s library of digital titles, please visit blog.zenstudios.com.