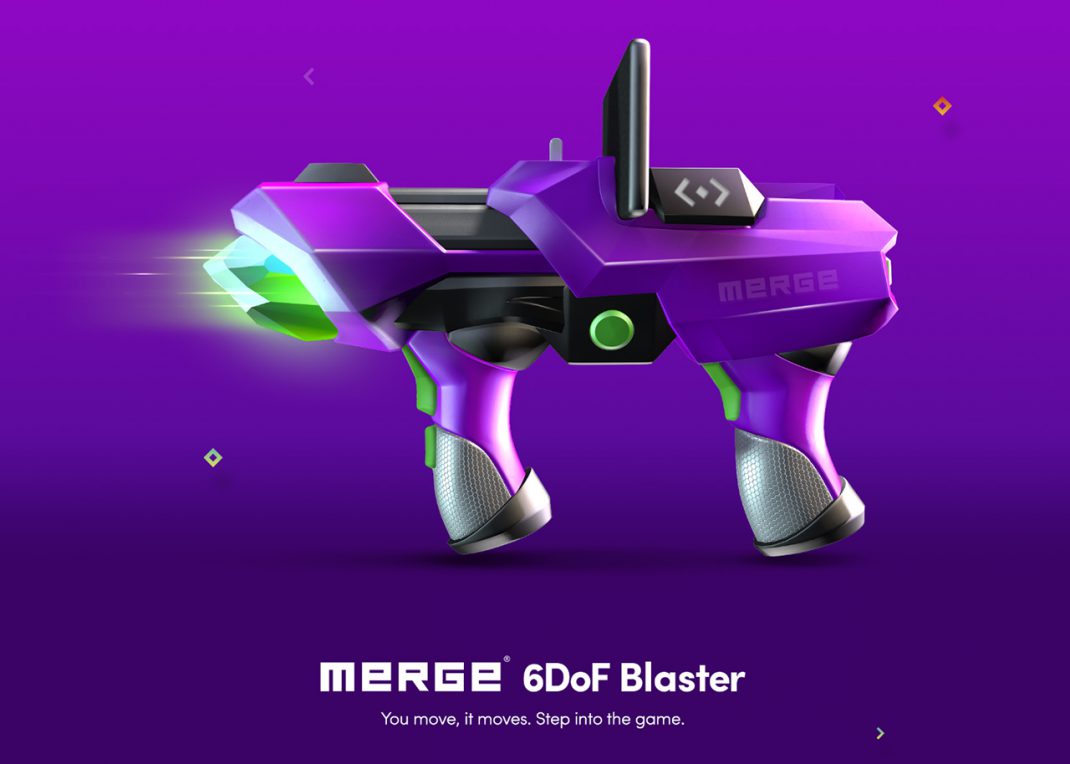 Las Vegas, NV – January 7, 2017  |  MERGE, the leader in mobile virtual and augmented reality for kids and creators of the award-winning MERGE Cube and MERGE Goggles, unveils today its MERGE 6DoF Blaster, a new breakthrough product that seamlessly blends the digital space with the real world without a VR headset. MERGE knocks down barriers for diving into VR by removing the need for a headset and allowing users to explore handheld virtual reality by docking their smartphone into the Blaster.

The MERGE 6DoF (6 Degrees of Freedom) Blaster uses sophisticated positional tracking technology that allows users to maneuver around virtual worlds by moving, ducking and jumping in the real world.

“What we’ve created is an intuitive and accessible virtual reality product and platform for the mass market. We can deliver a high-end, positionally tracked VR experience and put it in a form factor that’s easy to use,” says MERGE Founder Franklin Lyons. “MERGE 6DoF Blaster is a breakthrough product that will make virtual reality more practical for users and great for developers to build innovative gaming experiences.”

MERGE is also releasing the MERGE 6DoF Blaster manufacturing specs so manufacturers can create their own Blaster-compatible products. Products that meet the criteria will work with the MERGE ecosystem and be supported by content from developers and game studios around the world.

“Our blaster uses technology that makes all previous VR/AR blasters obsolete, so companies interested in creating their own will want to make them MERGE-compatible,” said MERGE VP of Creative Jeremy Kenisky. “This is great opportunity for manufacturers, because their customers will have access to a wide range of content, and it’s great for developers because their software will reach a larger audience.” Kenisky continued, “This arrangement works well for consumers, too, because it solves all compatibility issues. Any MERGE-compatible blaster they buy will work with all the content available.”

The MERGE 6DoF Blaster is expected to hit retail shelves this summer.

The company will also unveil MERGE Mini – a small, lightweight, marshmallow-soft VR/AR headset designed for kids ages 10 and up – at CES 2018. MERGE took all of the best features of their original award-winning Goggles to create Mini, which is designed to fit smaller hands and faces while still being comfortable for everyone. Compatible with most recent iOS and Android smartphones, MERGE Mini is the perfect introduction to virtual and augmented reality, and will retail for less than $30 (Summer 2018).

MERGE will also spotlight the recently launched MERGE Miniverse (www.MINIVERSE.io), a guide to virtual and augmented worlds. With hundreds of curated apps and experiences to choose from, Miniverse is the best place for users to experience the future of games, 360º video, educational apps, holographic toys and more. Each experience on Miniverse is tested by MERGE’s team of experts for quality, age rating, and motion intensity.