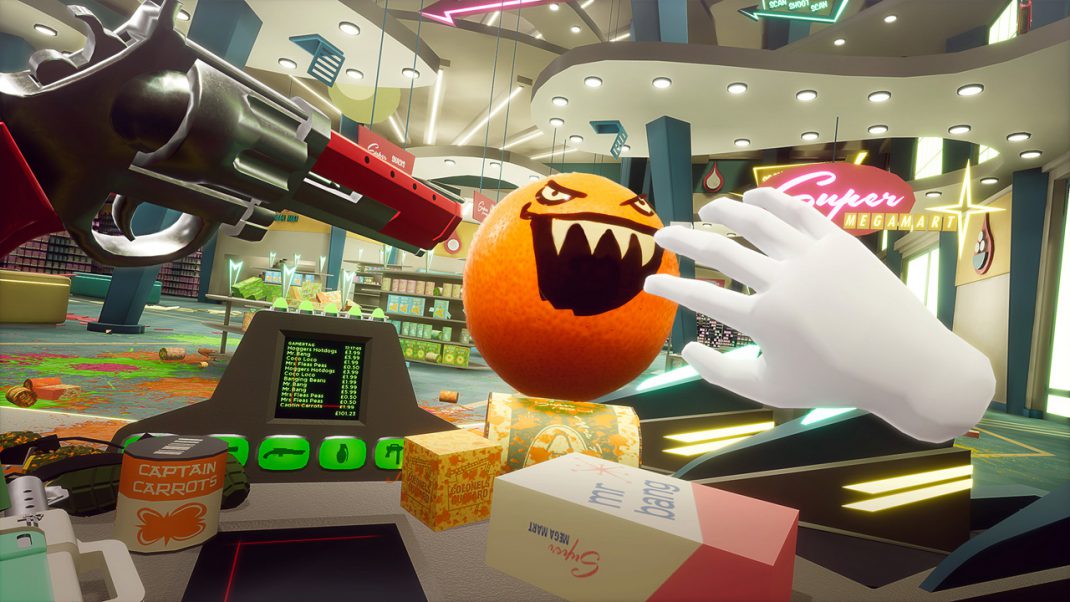 Farnborough, UK. (November 10, 2017) — nDreams, the UK’s leading purveyor of VR produce, is delighted to announce that Shooty Fruity is releasing for PlayStation®VR, HTC Vive and Oculus Rift this December 19, 2017, priced at €19.99/$19.99/£15.99.  Getting the game early will give players access to exclusive content.

Shooty Fruity challenges players to scan, pack, serve and more whilst firing stacks of guns at tons of mutant fruit across their glowing supermarket ‘Career’.  Featuring brand new multi-tasking gameplay designed from the ground up for VR headset and motion controls, players shoot pineapples, pomegranates and more whilst doing jobs across numerous shifts, including the newly revealed Canteen job role.   What’s more, new weapons can be purchased in the staff room, the game’s central hub where players can also customise and test their load out, including C4 launchers, flak cannon-style shotguns and more, all whilst grabbing a cup of coffee!

You can check out the game, along with newly revealed content hot from the nDreams canteen in this all new trailer

“We’ve been overwhelmed by the reception so far of Shooty Fruity, most notably being chosen by gamers at EGX 2017 as one of the Top 10 of the Show” said Patrick O’Luanaigh, CEO/Store Manager at nDreams, “If you thought Job Simulator was a blast, wait to you get a load of Shooty Fruity and its arsenal of berry-bursting weapons. Work has never been this much fun!”

Anyone that pre-orders the game, or buys it over the holiday season, will get free exclusive content, including the ‘Explody Bear’ grenade and the ‘Golden Guns’ skin pack for your arsenal.  You can already pre-order the game through the following links:

Shooty Fruity is published by nDreams (The Assembly, Danger Goat, Bloody Zombies) and has been co-developed by nDreams and Near Light, who previously collaborated on escapism experience Perfect.