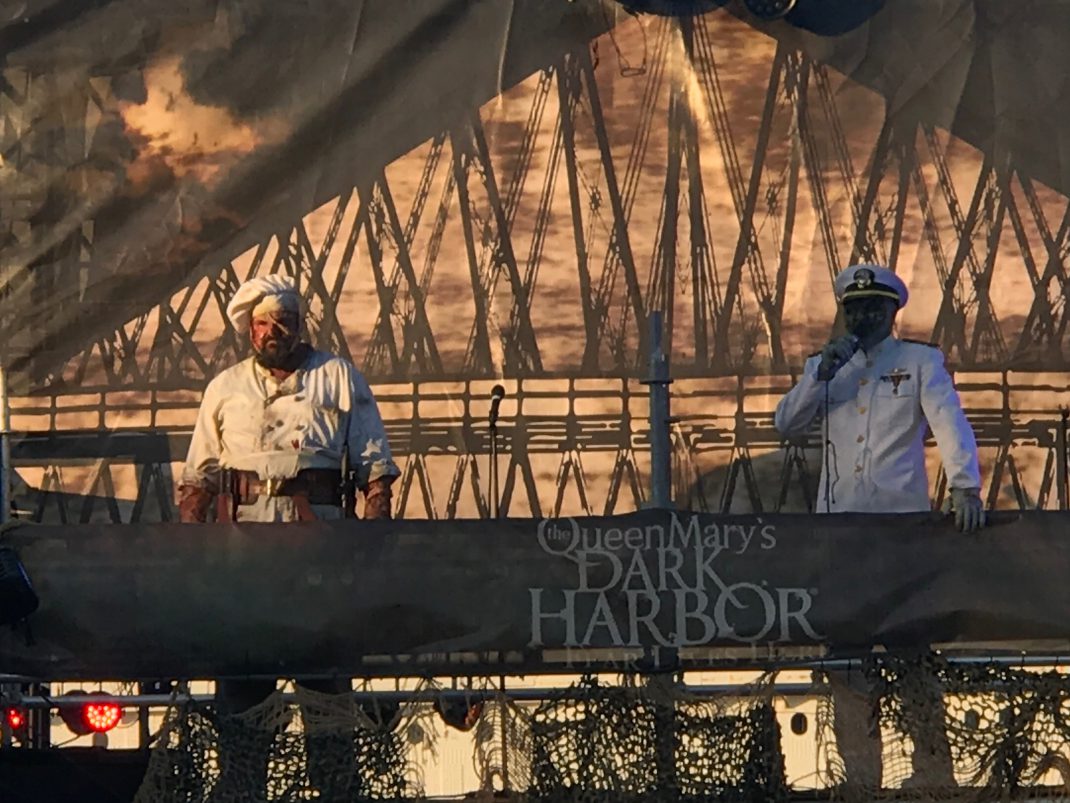 Queen Mary’s Dark Harbor has pulled into port for yet another Halloween. With six returning mazes alongside the all-new “Feast” haunted house, does Dark Harbor 2017 sink or swim? Read ahead for our thoughts.

Entering Dark Harbor we headed straight towards the dome, excited to experience Circus, a favorite from past years. This brought us to the first notable change to this year’s event- The dome is closed off. Last year you could find Circus and Intrepid housed inside; This year they are out in the open. This is a welcome change as it condenses the event and kills off some of the more desolate open areas they’ve had in the past, making it feel a little less like you’re hanging out in the Queen Mary’s parking lot. 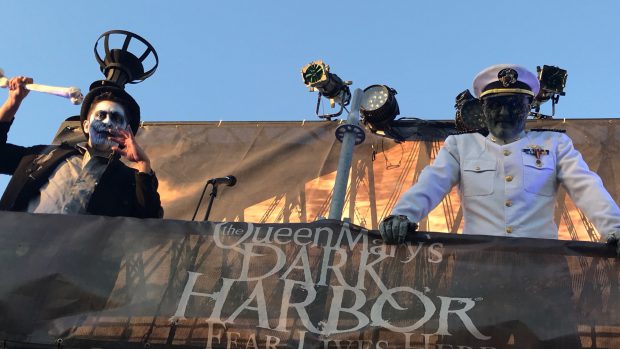 Wanting to give the sun a chance to go down before experiencing the more exposed attractions, we first headed into the ship itself. The design team at Dark Harbor has made wise use of the Queen Mary’s reputation as a haunted landmark, and uses its more notably reported spirits as the basis for attractions. First up was the returning story of Scary Mary in the maze Lullaby.

Lullaby is just as strong as ever this year. Telling the story of a young girl who drowned in the ship’s pool long ago, Lullaby’s talent delivered on all fronts. From priests in the opening moments of the maze sharing prayers at the girl’s funeral to the nannies watching over her in the afterlife and Mary herself, we were taunted nonstop by talent using creative dialogue and excellent teamwork in their scares. Lullaby also benefits from a redesigned layout this year, bringing guests down to ground level with the infamous swimming pool instead of keeping them above on the balcony as in previous years. 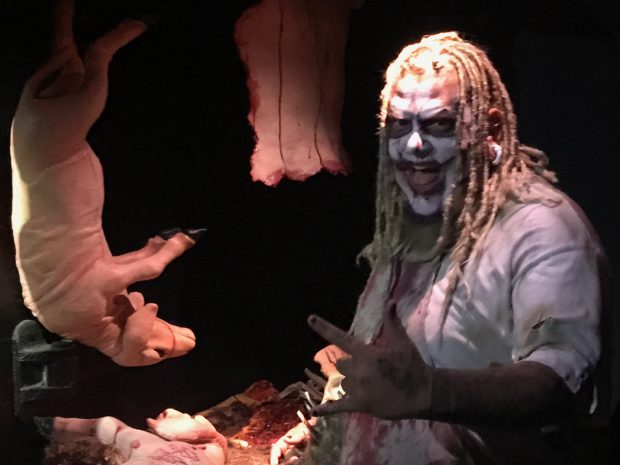 Following Lullaby we ventured into the all new maze Feast. Telling the story of the ship’s cook who was brutally murdered, locked in his own oven, Feast will ring familiar to fans of mazes like Slaughterhouse or Red Barn at Knott’s and Texas Chainsaw Massacre at Universal as guests are captured and prepared as the night’s meal. That’s about all it does, however. Our time in Feast was spent walking through rooms that were lit a little too well to experience a maze that was ultimately derivative of attractions we’ve seen elsewhere. Notable, though, was our first experience of the night with a bar inside a maze. After being treated to the first few rooms of the maze, guests have the opportunity to stop and order a drink before moving along. The room itself looked like it may hold no more than ~20 people, and that’s not counting the line snaking through to continue into the maze. I’m not sure how this will play out on a busy night but it was already a bit troubling even considering we were there for a media event with much lighter crowds. 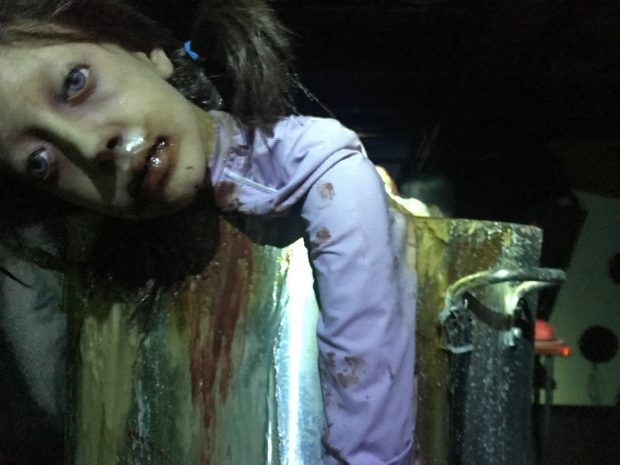 Once the sun was down we headed outside for the cooler air of the mazes on dry land: Circus, Intrepid, and Deadrise.

Circus is deceptively long this year. From above it seems to have a very small footprint but make no mistake, this maze snakes back and forth for maximum effort, tightly winding in and around itself. Circus features largely the same gimmicks as last year save for a much more hidden bar than Feast. Keep your eyes peeled for a hidden door and ask nicely when you find it, you may be treated to an exclusive speakeasy where you can see stage acts perform and scare guests remotely from an arcade cabinet (that didn’t seem to be working on our trip through.) Circus is also home to a mirror maze that I got lost in for quite a while, making for a nauseating limbo. Kudos, Circus. 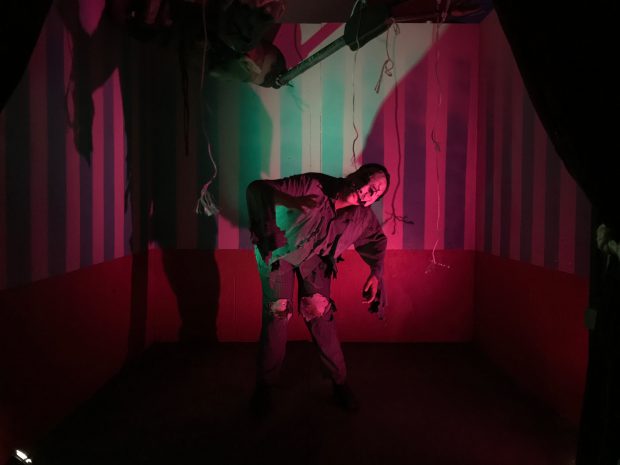 Deadrise is largely the same as it ever has been, you’ll either love or hate its aggressive sounds and water cannons.

Intrepid is a marked improvement over last year. Last year Intrepid felt half finished. It was a dark maze full of bare walls and confused talent. This year its moved to the previous location of mazes like Village of the Damned and Voodoo, even reusing some of their sets to great effect. Whereas last year you found yourself aboard a haunted train and little else, this year the train takes you to various foreign lands (including Castle Greyskull, apparently.) The variety really helps to mix up the flat tone of last year’s maze and Intrepid found itself home to one of our favorite scares this year. There is a room in the latter half full of fog and lasers and the monsters on opening night used it to great effect to seemingly appear and disappear in front of our eyes. Hopefully they can keep up this energy throughout the rest of the season as it was one of the few times a more stoic member of our group ended up shaken by a scare. 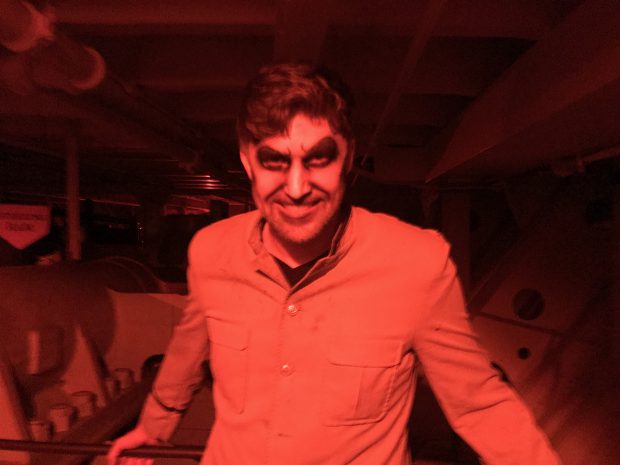 Rounding out the night were U340 and Soulmate back on board the ship. The only change between either of them this year is a flipping of Soulmate’s layout. Soulmate sends you through in the opposite direction from past incarnations of the maze and it suffers for it. It may not seem like all that big of an issue until you realize that Soulmate used to end in a larger room simulating a ballroom dance floor. This was a great finale using multiple mannequins and talent and this year you are simply dumped out into a hallway. Other than that disappointment, Soulmate and U340 are the same strong mazes they’ve been in the past.

Overall, Dark Harbor was a fun experience. There are some nitpicks I have logistically, such as overpriced flat soda and poor line control practices, but we were there for a preview event. I’m sure things will smooth out as the year goes on. Is it worth your money? If you’ve been in the last year or two I doubt you’ll see anything all that new. If you’re looking at a busy Haunt season and money is tight, maybe wait a year and let it refresh a little more for yourself. I’ve gone every year for quite a while and it can get a bit monotonous without things changing in a more exciting way year to year. But, if you’ve never been or you’re a true Dark Harbor fan, I have no doubt that you’ll love your time at the Queen Mary this October.