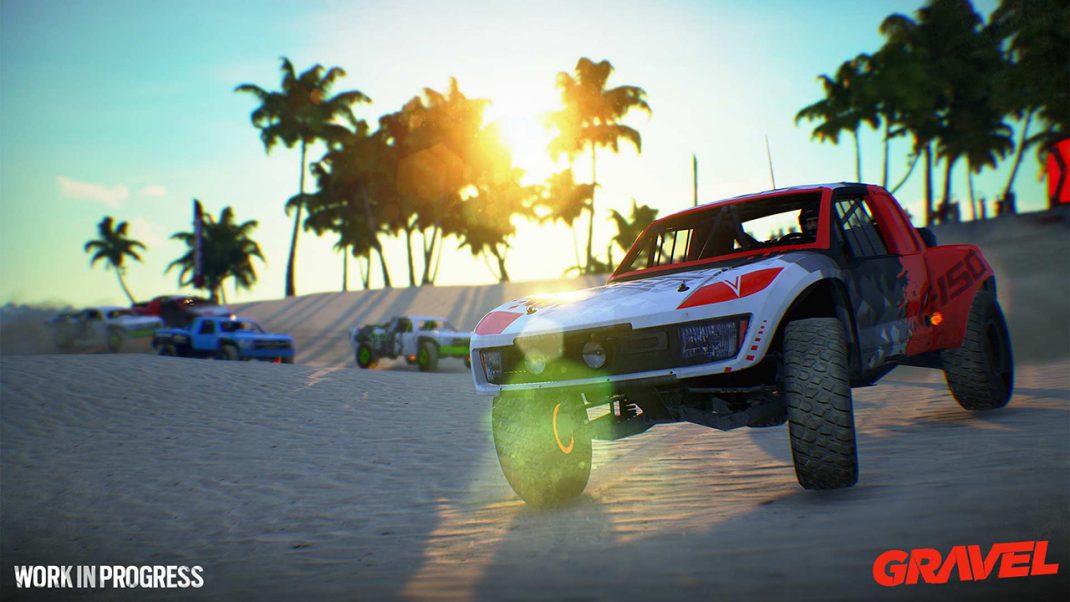 March 1, 2017, Milan – Milestone, one of the leading and longest established racing game developer in the world, is proud to announce its new IP dedicated to the 4-wheeled off-road world: GRAVEL. The game will be available on PlayStation®4, PlayStation®4 Pro, the Xbox One all-in-one games and entertainment system from Microsoft, and Windows PC next summer.

CONCEPT:
“Gravel is only racing title on the market to pack a holistic off-road experience into a single game.. It celebrates off-road racing by taking players to exotic locations around the world with some of the most exciting vehicles ever created. Thanks to the Unreal Engine 4, Milestone can finally unleash its creativity by tackling the arcade-genre with the most ambitious off-road racing game ever created. Bearing in mind the concepts of fun, competition, speed and adrenaline, we had the chance to think big by putting the best elements into the same game that we could create: photorealistic graphics, a dynamic time of day and weather system, accessible physics that can be enjoyed by everybody, breath-taking locations where players can race at full speed rushing through forests, snowy mountains, dunes and deserts. We love the way Gravel is shaping up and we believe that the players will be amazed by how funny and fresh this game will be”, says Irvin Zonca, Head of Game Design Milestone.

DISCIPLINES:
There are four disciplines included in the new Milestone IP which promise to take the player into an adrenaline-fueled combination of petrol and dirt:

Many other on and off-line game modes will form an integral part of GRAVEL and will be announced in the coming weeks.

THE TV SHOW:
The game will revolve around the GRAVEL CHANNEL, which presents the OFFROAD MASTERS format, an annual television program that will accompany the player on their way to fame and glory. Through challenges and events that are dedicated to every one of the in-game disciplines, the skilled driver must reach the FINAL LEAGUE and challenge the champion from the previous edition, attempting to be crowned as the new OFFROAD MASTER. The route will be strewn with increasingly difficult challenges, but also with discipline specialists, real MASTERS, who will put even the most experienced players to the test.

UNREAL ENGINE:
GRAVEL is the first Milestone game created with Unreal® Engine 4 by Epic Games, Inc.. This engine ensures incredible visual quality, with realistic, impressive lighting and particle effects. Furthermore, thanks to its technical features, we can approach new game modes, including, for example, the management of open spaces and completely redesigned physics.