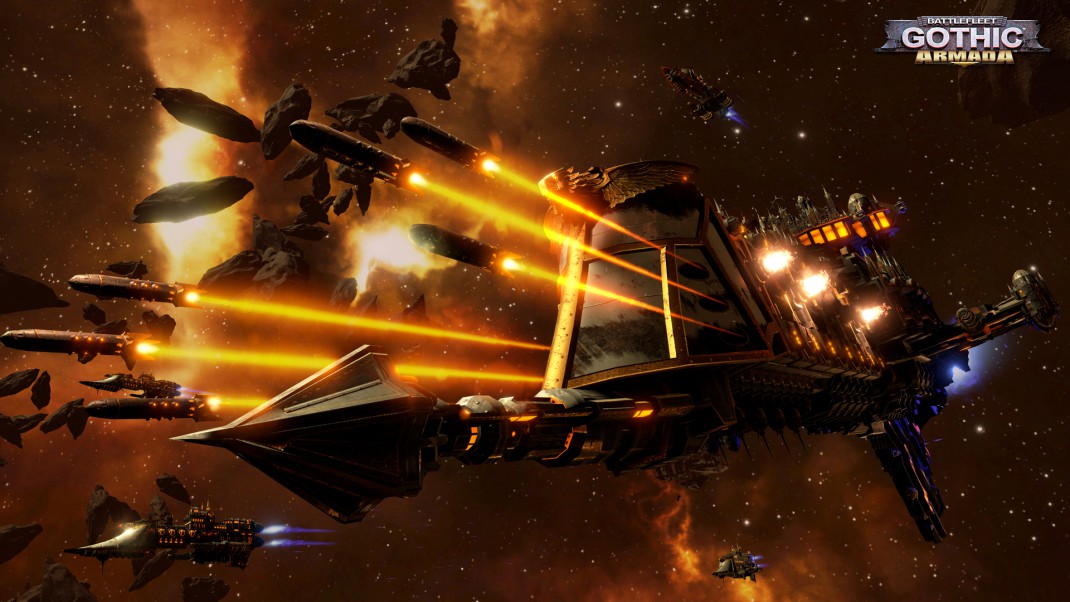 March 11, 2016 – Battlefleet Gothic: Armada, Tindalos Interactive’s real-time strategy game set in the Warhammer 40,000 universe, opens its beta today. All players who preorder the game on Steam or the official store can immediately join this beta, build their first fleets and test their worth as Admiral against other players or the AI!

In addition to the 10% discount offered during the pre-order period, Early Adopters of Battlefleet Gothic Armada will receive one extra faction for free – the Space Marines – and immediate access to the Beta of the game. From today, players can practice building their Imperium and Chaos fleets and get used to the gameplay mechanics in the solo campaign prologue, before testing their skills against the AI or players online in 1v1 skirmishes. The remaining factions (Orks and Eldar), as well as the full solo campaign and other multiplayer modes (like 2vs2) will be made available when the game launches later in March. The Space Marines fleet will be available to play a few weeks after the game launches.

Today’s overwatch trailer shows off what you can expect from the full version of Battlefleet Gothic: Armada when it releases later in March. Discover the branching story campaign, in-depth customization and tactical gameplay!

Made in Unreal Engine 4, Battlefleet Gothic: Armada offers deep management of every ship in your fleet, during and between battles. With different skills and abilities, you can customize all aspects of your ships. Whether it’s crew for weaponry or repairs, or new skills such as the augur probe and micro-warp jump, you’ll be able to add more as each ship gains experience.

Multiplayer battles are all about positioning and flanking your enemy. Carefully align your path with your target, launching a devastating salvo of torpedoes before violently ramming them for incredible destructive force. Alternatively, you may choose to slide close enough to expose your broadside cannons and unleash a barrage of heavy fire. every action has weight and inertia, so mistakes will rarely be left unpunished by your opponent.

Players can now pre-order the Early Adopters Edition of Battlefleet Gothic: Armada for 10% off on Steam and the official store. Early Adopters will receive the Space Marines Fleet DLC for free, along with immediate access to the Beta. This offer is available for players who preorder or buy the game within 2 months after release.