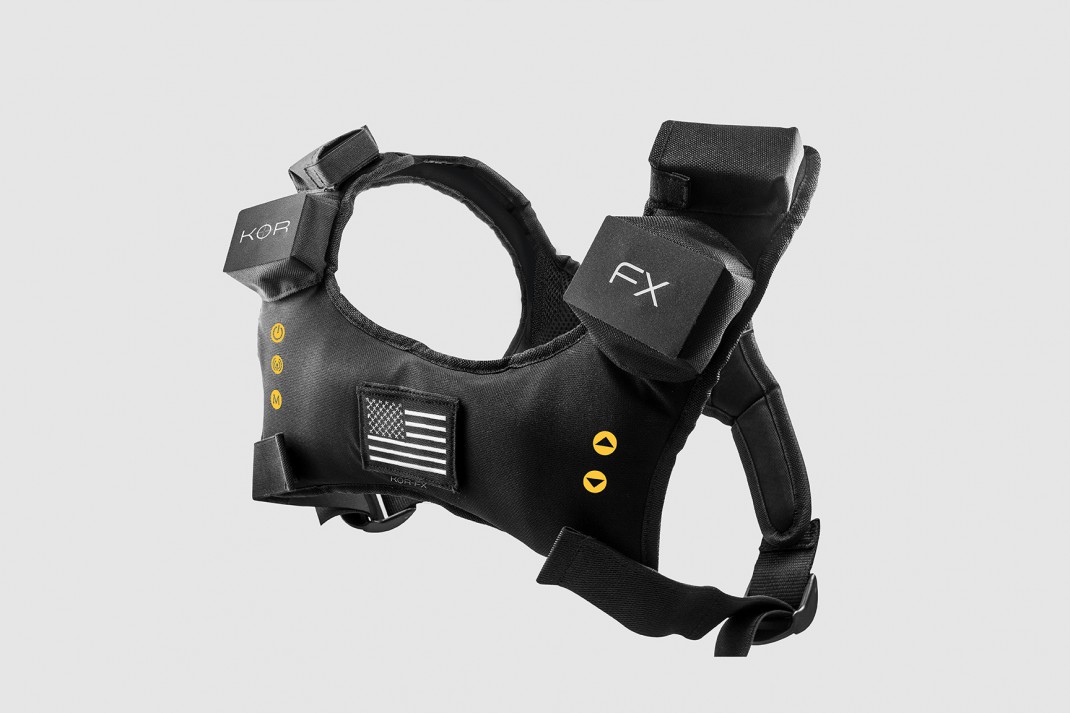 The KOR-FX gaming vest from Immerz, Inc. is a very intriguing product that promises to help gamers “feel” their games like never before with “acousto-haptic technology”. Recently, the company loaned us out one of their KOR-FX gaming vests for review and we got to experience this feedback for ourselves. From a design perspective, the KOR-FX gaming vest resembles some sort of a chest rig, with patch space on the center of the chest area and an array of control buttons to the left and right sides. Also on the front of the unit are two battery compartments as well as the two transducer zones. The material feels fine for what its purpose is, and it is very lightweight as to not interfere with the user’s comfort.

Setting up the KOR-FX gaming vest is the most tricky part of the whole system, which is not actually all that tricky. You plug the wireless dongle into a USB port for power (or install 4 AA batteries into the unit) and then plug the audio output jack into the input 3.5mm port on the dongle. The KOR-FX unit runs off of audio input – not data in terms of needing information from the USB port. From there, you simply plug your headphones into the audio output jack on the dongle and make sure your KOR-FX gaming vest has the necessary 4 batteries installed into the two battery compartments. Finally, after powering it all up, you pair the dongle to the KOR-FX gaming vest by way of easy-to-use pairing buttons. When the flashing green light on the dongle goes solid, release both the buttons (one on the dongle and one on the vest itself).

It sounds a little tricky when reading it, but it’s not hard to do and you will master this process after a couple attempts. Something that needs mentioning is that your audio source should be outputting maximum volume to the KOR-FX base unit. The intensity of the both the line in and line out can be controlled by two separate rotary dials on the back and front sides of the base unit. There is a mode button on the wearer’s right side of the chest panel. This mode button selects between three sound ranges that the KOR-FX vest will transduce into your body. The recommended mode for the vest is mode 2 – that gives you a nice blend of low and high frequency sound without being too much of either. This is something you will have to test out for yourself, however, as everyone will have their own preference on what feels best to them. After setting the system up, it was time to actually put it to use. So, I fired up the survival-horror title, Alien Isolation and fully expected to get my share of Halloweentime scares in for the night – and it really added to the gameplay. The feeling of the KOR-FX vest in action is not just of some vibrating panels on your body. The way the technology is designed, it feels as if it’s actually vibrating through your chest cavity. It is pretty darn cool and added a lot the immersion factor and scare factor when the Alien inevitably caught up with me. By far, this is the ONLY way I would consider playing Alien Isolation in the future – probably coupling it with Oculus Rift support for the ultimate in immersion.

Unfortunately, the KOR-FX gaming vest does not work as well in games with a ton of audio going off all the time. In those cases, it tends to just vibrate constantly and doesn’t provide a lot of separation in what you are feeling and what you are hearing. I had read this previously about the KOR-FX and wanted to see if it was true – I fired up Battlefield 4 and, unfortunately, it was. However, as this device does strictly use audio for triggering its transducers, many folks talk of getting a magnitude better effect from it through software packages like SimVibe. This software redirects specific noises/frequencies to the lower end of the spectrum, which the KOR-FX gaming vest can be mode-selected to monitor, creating a better separation of ambient noise and physical effect. The SimVibe software retails for about $90 dollars, however, and we did not have a license of it to use for our testing.