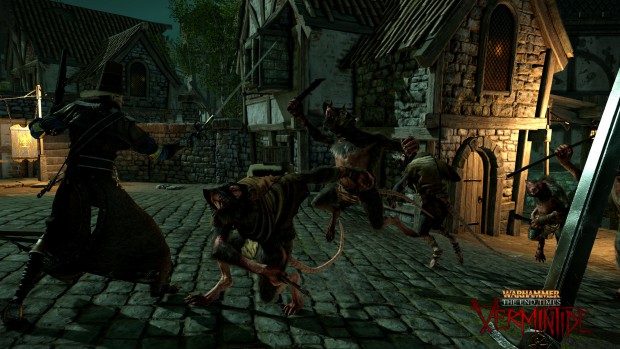 October 12, 2015 – Independent developer Fatshark today released the fourth of five Action Reels, showcasing gameplay from each of the five heroes playable in Warhammer: End Times – Vermintide. The latest Action Reel is of Bardin Goreksson, the Dwarf Ranger hailing from the Grey Mountains. Dwarves are often considered a gregarious folk, prideful and not afraid to offend, and few are more so than Bardin. He is not the vindictive type or cruel in nature, but he has a habit of belittling his comrades through sheer ignorance and his robust attitude. He will oftentimes be the loudest in the group, even if silence would have been preferable. If negotiations go sour, the Dwarf Ranger is the first with his axe out and swinging.

In Vermintide, the city of Ubersreik is under siege as players select from a band of five heroes with different play-styles and abilities, all equipped with unique gear and personalities. Working together cooperatively, players must use their individual attributes to survive an apocalyptic invasion from hordes of relentless, power hungry Skaven, across a range of environments stretching from the top of the Magnus Tower to the bowels of the Under Empire.

Vermintide will launch on Steam for Windows PC on October 23rd and is now available to pre-order in a Standard and Collector’s edition. To secure your pre-order please visit the Warhammer: The End Times – Vermintide Steam page: store.steampowered.com/app/235540/