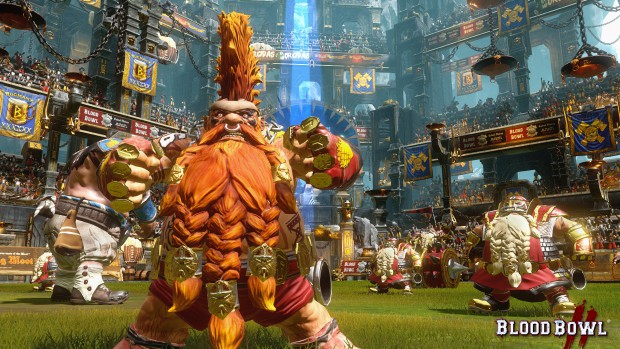 09/01/2015 – Two diametrically opposed teams face-off each other in the latest gameplay video of Blood Bowl 2, the sequel to the video game adaptation of Games Workshop’s famous board game that combines American football with the fantasy world of Warhammer. To sum up: the slow and tough Dwarfs, versus the fast and scrawny Skaven!

Albeit slow, Dwarfs make great Blood Bowl players. They’re compact, tough, well-armoured, and have a stubborn knack of refusing to die! Most successful Dwarf teams work to the principle that if they can massacre all the other team’s best players and wear down the rest, then there won’t be anybody left to stop them scoring touchdowns! Their Deathroller, a real mobile siege engine, helps greatly with this tactic, as it is able to crush any enemy regardless of its size. However, the use of such a machine is strictly forbidden, and the referee will always end up sending the player (and his ride) off.

Skaven, on the other hand, show just the opposite traits. Save for their Rat Ogre, they’re not so tough, frail, but rather agile and extremely fast. Many an opponent has been left in the starting blocks as fast-moving Skaven players scamper through a gap in the line and run in for a lightning fast touchdown. Make sure your Skaven players keep away from the opponent though – especially if they’re hard-hitting players such as the Dwarfs – or you’ll be likely to end up the match with much less players than you started it…

Blood Bowl 2 is currently available for pre-order, with, as a bonus, one of two additional races (the Wood Elves or the Lizardmen). Players who pre-order the game on Steam will also receive access to the Multiplayer Beta of the game, which will start next week! Click here for more info.

Blood Bowl 2 will release on PS4, Xbox One and PC on September 22