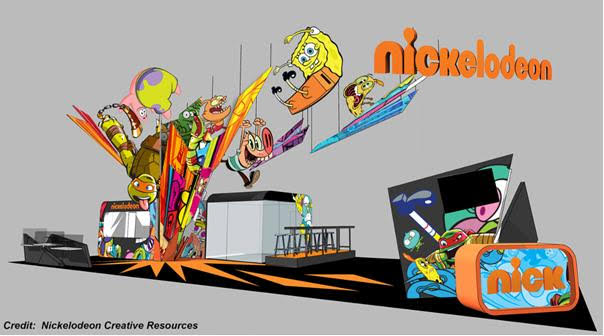 Nickelodeon’s 1800 sq. foot booth (#4113) is inspired by the excitement and imagination streaming out of its Burbank Animation Studio.  Sky-rocketing from the floor to the ceiling of the convention center, the booth’s bold collage design showcases series like Pig Goat Banana Cricket, Harvey Beaks, Teenage Mutant Ninja Turtles, Sanjay and Craig, SpongeBob SquarePants and more.

The booth will feature activations that include: a voice record room where fans can lend their own voices to select scenes from their favorite Nick TV shows; a facial recognition booth where attendees can become their favorite characters; a “Throwback Thursday” (#TBT) celebration; and autograph signings with Tom Kenny, Kel Mitchell and more.

The following is a full rundown of the panels and booth activity:

Are you ready, kids? Nickelodeon’s SpongeBob SquarePants – The cast of SpongeBob is back!  We’ve assembled all your Bikini Bottom favorites to perform the episode “Idiot Box” at a live table read as chosen by fans online.  Featuring Tom Kenny (SpongeBob), Bill Fagerbakke (Patrick Star), Rodger Bumpass (Squidward) and Dee Bradley Baker (all other Bikini Bottomites).  Following the performance will be a Q&A with the cast and creative director, Vincent Waller.  Plus, a sneak peek at a brand new episode and fan trivia with prizes!  Hosted by Claudia Spinelli, VP of Current Series Animation for Nickelodeon. All landlubbers welcome!

Nickelodeon Animation featuring Sanjay and Craig – Noiice! – Sanjay and Craig returns to Comic Con with a live table read followed by a Q&A with the cast and creators.  Featuring creators and co-executive producers Jim Dirschberger and Jay Howell, and voice talent Chris Hardwick (The Nerdist), Maulik Pancholy (30 Rock), Matt Jones (Breaking Bad) and other special guests.  Moderated by Claudia Spinelli, VP of Current Series Animation for Nickelodeon.  But that’s not all!  After the Q&A we’re screening, sneak peeks from Sanjay and Craig and Harvey Beaks, plus, a special preview of Nick Animation’s upcoming brand new shows Pig Goat Banana Cricket and The Loud House.

Nickelodeon’s Variety Show ft. Breadwinners Live! – Nickelodeon Animation takes over the Horton Grand Theater to bring you a cartoon-copia of surprises including swag bags packed with exclusive collectibles!  Hosted by DJ Boogie.  Ticket Required: get free tickets in the Autograph Area of Comic Con’s Sails Pavilion.  Come hang out, crush some snacks and enjoy the show!  You can meet SpongeBob, Patrick and the Dino Charge Power Rangers, watch exclusive cartoons and the world premiere of two brand new shows, Pig Goat Banana Cricket and The Loud House. See the stars of Henry Danger unmask a super-secret surprise and laugh with the voice cast of Breadwinners as they perform and sing at a live table read!  Yip-Yip!  Scheduled to appear are Robbie Daymond (SwaySway), Eric Bauza (Buhdeuce) and special guests.  This is the one-night-only kids and family event full of amazement that you won’t want to miss.

Nito–Get Animated App: Nickelodeon teams up with Nito (www.NitoApp.com) to allow kids (and big kids) to “become” their favorite Nick characters. Step into the booth and voila – your movements and expressions are mimicked perfectly by SpongeBob, Korra, Harvey Beaks, and more!  You can take part in a real animated scene and will then be emailed a video to share (and show off with).