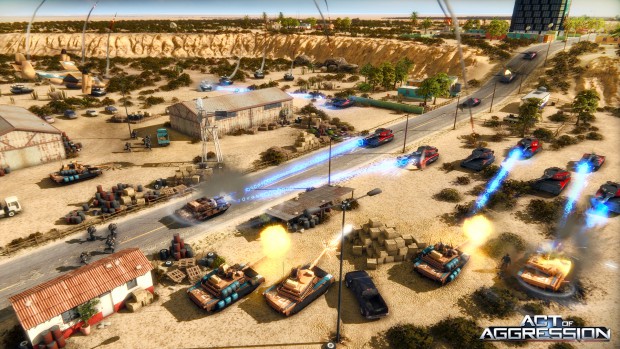 June 10, 2015 — Set in a near-future setting, Act of Aggression, techno-thriller RTS releasing this September for PC – from Eugen Systems, developers of the million selling Wargame series – draws inspiration in its three unique factions from real life technology and cutting-edge prototypes. In a series of trailers designed to showcase the strengths and weaknesses of each of the three factions, let us introduce the Chimera, a versatile global task-force.

Take a look at the video below to see the versatility of the Chimera in action:

With an HQ that also acts as a power-reserve there’s no stopping the development of the Chimera’s diverse military capabilities; a heavy reliance on unmanned UAVs for exploration and transport, the Chimera can put its manpower into super-soldiers with exoskeletons.

Next time, we’ll be taking a look at the Cartel – a shady private military company armed with the latest prototypical technology, including some illusive and exciting stealth technology making The Cartel incredibly hard to spot.

Until then, here’s a brief breakdown of each of the three factions in Act of Aggression.

Across large, authentic maps, players will harvest resources, build bases strategically, defend them, and produce all kinds of units to match the wit of their opponent. Extend your base network with off-base refineries for harvesting resources, and protect supply networks ensuring a stable income of cash and minerals. You’ll even fight other players for occupied banks as a supplementary income, and capture crews bailing out from tanks and planes or wounded on the battlefield to take as prisoners of war.

Act of Aggression launches in September 2015 on PC.