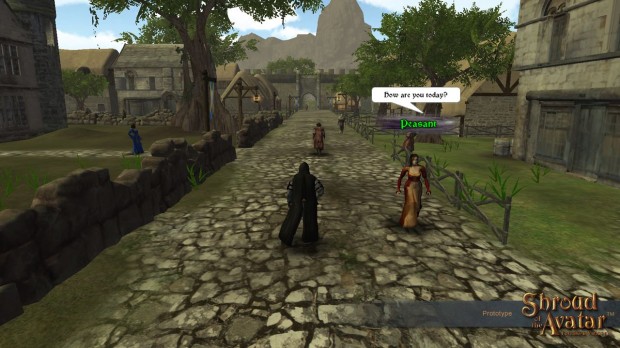 AUSTIN, Texas, November 24, 2014 — The virtual fantasy world of Shroud of the Avatar™ (SotA) is about to get a major population boost. Today Shroud of the Avatar, from legendary game designer Richard Garriott, goes live on Steam Early Access. Steam is the hugely popular digital distribution platform from Valve Corporation with 100-million active accounts. The Early Access program gives players the chance to try out games as they evolve. Shroud of the Avatar is a crowd funded game that has surpassed more than $5 million in funding.

For most of 2014, the game has evolved with content updates one weekend every month. The latest update, Release 12, will be available to Steam Early Access subscribers today. With this update the game is now available 24/7 (except for planned downtimes). There are currently two ways to access SotA…through Steam Early Accessor via Shroud of the Avatar’s regular game client, or both.

“We are excited to be pushing the doors wide-open to Shroud of the Avatar,” said Creative Director Richard Garriott. “When we applied for Early Access for the game, we received our green light in less than three days. In fact Steam players gave the OK with an 86 percent approval rating. What they’ll find is a fantasy RPG that harkens back to my earlier games in the genre, but with modern day technology that combines a single player narrative with an Ultima-like sandbox MMO.”

Release 12 provides several new features to fans and backers of Shroud of the Avatar, including:

And that’s not all. Over the past two months several other features have been released in Shroud of the Avatar, including:

Also this month, fans and backers of the game will celebrate SotA’s $5 million crowd funding milestone and the Steam Early Access launch with a special CyberMonday event on December 1 (that also marks the end of the current 15% purchase bonus program). The development team will hold several live stream events (Google+ Hangouts) to discuss Shroud and they’ll be awarding many prizes to registered entrants, including items from SotA’s hardware partners. Prizes will include:

Shroud of the Avatar is a multiplayer fantasy RPG for the PC that is the spiritual successor to Richard Garriott’s previous works in the genre. It is expected to launch in 2015. It is a crowd funded and crowd sourced game built in Unity that has raised more than $5.1 million from backers to date. For more information on the game and to become a backer of the project, go to: