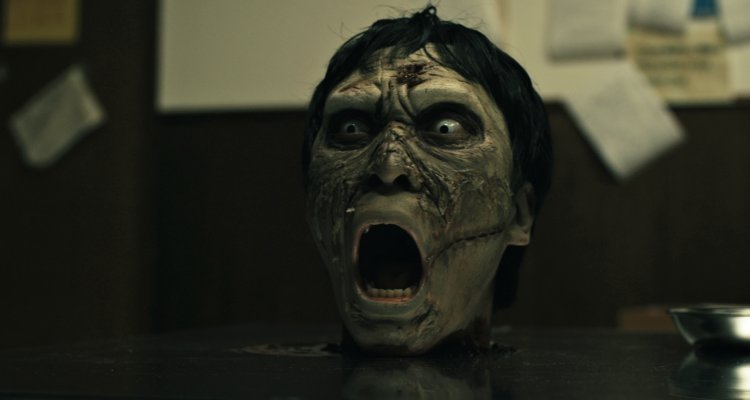 ABCs of Death 2, the sequel to the 2012 anthology flick, ABCs Of Death, once again puts 26 directors in command of each bringing a short story to life that use a single letter of the alphabet to set its morbid theme. The first ABCs Of Death was a spotty affair of brilliance, shock value, duds, and stupidity that kept me on my toes from A to Z. This time around, the segments were, with some exceptions, a bit less all over the place than before. Because of this lack of extremes, however, I found myself struggling to stick with the film through some of the video segments.

Still, there are some amazing, standout segments to be sure – my most favorite being Steven Kostanski’s “W is for Wish”, which took me right back to being a kid and seeing those He-Man toy commercials on morning TV. Watching them, I would always think, “Wow, I would love to join He-Man and fight Skeletor!” Unfortunately, I never really thought about what that world must be like – well, this segment does exactly that and it turns out not to be the great idea I once thought it was. Another standout segment is Alejandro Brugués’ “E is for Equilibrium” which, while not a horror short, just made me chuckle as, coming from a guy who roomed with my best friend for a while, I have been in these guys’ shoes – metaphorically speaking, of course.

I found the worst of the segments in this anthology to be Lancelot Oduwa Imasuen’s “L is for Legacy”, which features an indiscernible plot and unintentionally-cheesy monster, and Todd Rohal’s “P is for P-P-P-P-Scary”, which I simply didn’t get at all. The rest fall somewhere in between and serve their purposes. I must give a special shout out to Kristina Buozyte’s “K is for Knell” – please turn this into a full motion picture. I was very intrigued by the “antagonist” of this short and trying to figure out what it was.

Overall, the ABCs Of Death 2 is an entertaining sequel that, while not quite as over-the-top as its predecessor, still has me wanting to see the franchise continue – if for nothing more than to foster the creativity of new generations of genre film directors. There are some really great short segments in this anthology, but not enough of them to raise the bar higher than the one set by the original. The ABCs Of Death 2 is now available on VoD and other video rental services.