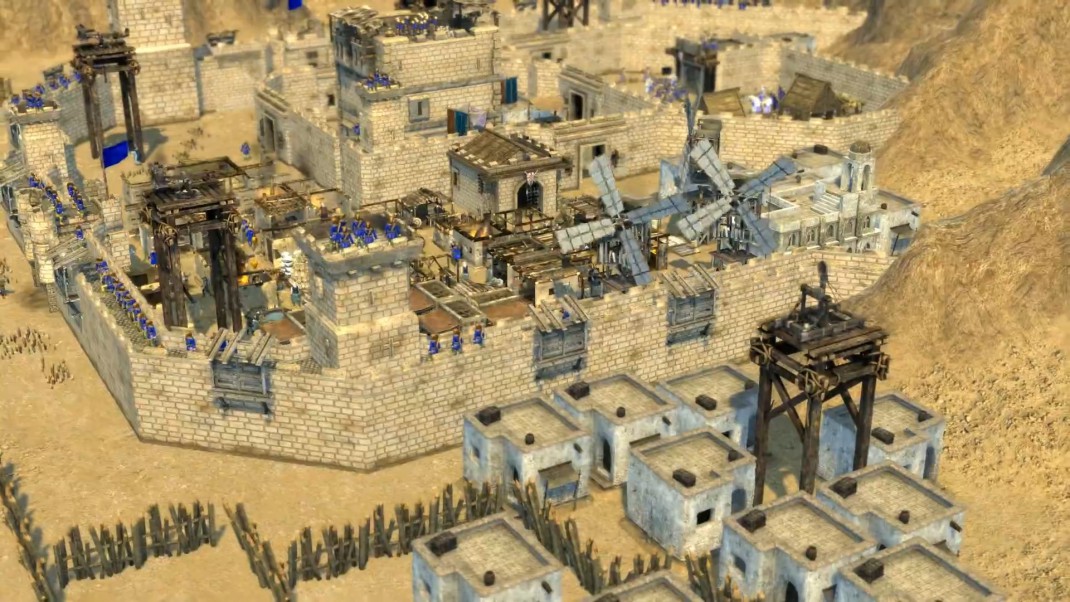 The self-published sequel to Firefly Studios’ successful castle real time strategy game, Stronghold: Crusader II puts the player in control of a military force during the Third Crusade. Stronghold: Crusader II focuses heavily on the multi-player experience, with a few different game play modes and a map editor. The game does have a very small single player campaign mode, but it only lasts about ten missions and is billed more as a tutorial for the multi-player mode rather then an actual campaign. While I enjoy multi-player game experiences, I’ve never been that good with RTS games as a genre, and never felt that I could compete online, so once the single player campaign was done, there wasn’t much more for me to do. But that shouldn’t deter you from Stronghold: Crusader II, which is a very solid RTS.

Stronghold: Crusader II’s story is loosely based on the events of the Third Crusade. King Richard the First, also known as the Lionhearted, has gathered troops from Europe to launch a military campaign against Saladin and his Islamic soldiers. King Richard’s goal was to reach and liberate the city of Jerusalem, which he never reached. The Third Crusade was still considered to be successful because of King Richard’s capturing of Acre and Jaffa, while reversing many of Saladin’s conquests leading up to the war. At least, that is the setting of Stronghold: Crusader II, the story that the game tells is far less comprehensive and really leaves it up to the player to find out more.

Unlike other real time strategy games on the market, Stronghold: Crusader II doesn’t bother with much of a story line in its single player campaign. The story will be told through objectives that the player needs to complete, and not through actual narration. For instance, the player may be told that King Richard is coming to inspect his stronghold, so he needs to have a certain level of autonomy and supplies set up before the time limit expires. It was only at the mention of King Richard’s name did I realize that this was, indeed, set during the Third Crusade. It feels like Firefly Studios felt that the setting was the most important idea for Stronghold: Crusader II, and not the telling of the story of the Third Crusade. I felt that there was a missed opportunity here to tell a very interesting, historical story in the single player campaign, and it was missed.

Stronghold: Crusader II really shines when you stop caring about the story line and really focus in on the actual game play mechanics. The game is built from the ground up like any other rts game on the market, you essentially need to gather resources in order to build a settlement, and complete the objective given to you or annihilate the other player from this Earth. Resources are easy enough to gather, you begin by focusing on wood and apple orchards to have a baseline of lumber and food to build other structures. With a quarry, you can then begin to build walls to enclose your settlement and truly build a castle in the middle of the desert to launch your attacks from. Like other rts games, speed is the most important aspect of the game. Gather items quickly to increase production and better your troops or you will be overrun, especially by the AI of this game.

Multi-player games is the focus of Stronghold: Crusader II and Firefly Studios made sure to give you enough things to do to make it worth your time. There are two different multi-player modes; co-op and versus. With co-op, you and a partner work together to build up your stronghold to take on the campaign, while the versus mode is more of your traditional multi-player fare. You can customize your games with different settings, such as beginning gold or resources, and there is also a level editor to help keep the multi-player aspect fresher with different maps.

You do get to tweak a few items in your stronghold that can either help or hurt the growth of your castle. Items like the tax rate, food rationing, religious services and so on are all customizable using a slider to set the rate you want it to be at. However, the happiness of your population will change with each move of the slider in very predictable ways. If you raise taxes and lower food rationing, then your people will become upset and leave, nevermind that you are in enemy territory, in the middle of the desert, and besieged by wild animals.

Stronghold: Crusader II does a lot right, but nothing exceptional. Everything in this game is done well, except the storyline, but nothing is done well enough to rise above the classic competition from the likes of Blizzard.

The aesthetics of Stronghold: Crusader II is decent enough for the game to not look horrible, but not good enough to stand up against some of the other rts games on the market. The voice acting for the game is at least decent and does not sound horrible nor makes you want to tear out your speakers. The detail of the inhabitants of your castle is not well defined at all, and most individuals will just end up looking like blobs at the level of zoom most people play at. You can zoom into the action, but the definition does not get any better. Most stages are fairly bland to look at, since it is mostly desert landscape, but you do get some maps that have interesting terrain features, just not enough to keep each map from feeling exactly like the last one.