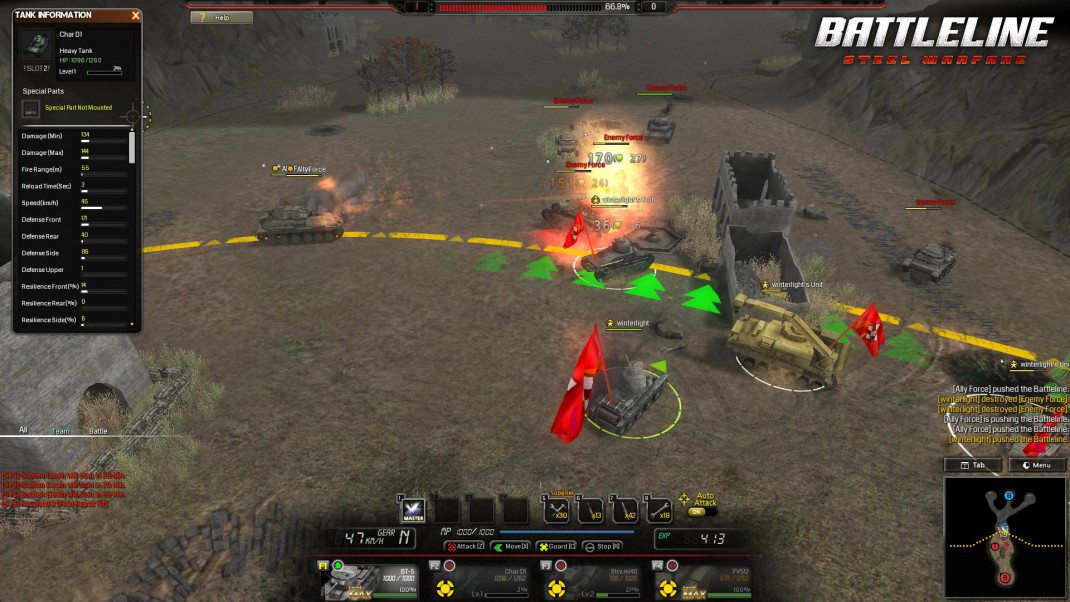 Strategy is key in BATTLELINE: STEEL WARFARE, and each victory contributes to a team’s dominance in the international theater of war. The title is named after the main mode in the game where teams push a visible BATTLELINE back and forth as they take objectives and maneuver on the battlefield. Advancing the BATTLELINE by overrunning your enemy’s positions is the way to win the battle!  Players can build Divisions (guilds) with other players to use the combined strength of their tanks to strategically outmaneuver, take down enemy forces and conquer nations. However, be warned that rebellion is possible!

“BATTLELINE: STEEL WARFARE offers a unique and compelling mix of in-tank battles and broader meta-strategy gameplay,” says In Joon Hwang, Director of Digital Games for BANDAI NAMCO  Games America. “The broad spectrum of abilities, customizations, and strategies within the game all come together to give players a multitude of choices not found in other free-to-play games.”

With the sheer variety of tanks from the modern era all the way back to WWI, tank maniacs can finally figure out how many T34s it would take to bring down an M1A1.  Or match up Western vs. Soviet forces in the ultimate tank showdown.  The possibilities are endless!

Players can customize their tanks by leveling up each tank’s attributes and equipping different shells or gear for various effects. Building and capturing bases within conquered territory will also greatly affect the battle, offering gameplay bonuses to allies. Commanders can also equip various consumable items to be used in the heat of battle.

BATTLELINE: STEEL WARFARE is an original creation from long-time free-to-play game developer Creant Studios, who are excited to be releasing it as their first title for a western audience. “Our team has devoted countless hours and effort to the development of BATTLELINES: STEEL WARFARE,” says Dongwook Kim, CEO of Creant Studios, “We look forward to watching players advance the power of their guilds as well as the lines of battle when the game officially launches later this year in the West.”

To join the conversation about BATTLELINE: STEEL WARFARE, like us on Facebook at www.facebook.com/battlelinegame, follow us on Twitter at www.twitter.com/battleline, and register for closed beta at www.battlelinegame.com. For more information about BANDAI NAMCO Games America Inc.’s other products go to: http://www.bandainamcogames.com/home.html.