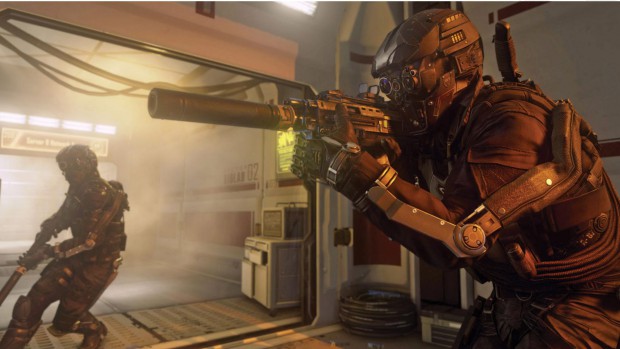 SANTA MONICA, Calif. – Oct. 8, 2014 – As fans around the world prepare for a new era of Call of Duty® this November with the release of Call of Duty®: Advanced Warfare, Activision Publishing, Inc., a wholly owned subsidiary of Activision Blizzard (Nasdaq: ATVI), just delivered a smooth transition for Xbox 360 and PlayStation®3 computer entertainment system fans interested in playing Sledgehammer Games’ new title on next gen.

This offer for full-game free upgrade within console family is limited to purchases of Xbox 360 and PS3 digital versions made by March 31, 2015, and does not apply to physical game copies. Additionally, all multiplayer stats transfer. Plus, all DLC purchased for in-game use, including Season Pass transfers too for free, as long as players’ Xbox Gamertag or PSN ID, remains the same.

Call of Duty: Advanced Warfare launches worldwide November 4. Anyone who purchases a physical or digital Day Zero version of the game, for the first time ever, can start playing as much as a day early, on Day Zero, Monday, November 3*. Beyond the special early access to the game, the Day Zero Edition also comes with two custom weapons: the AK-12G Assault Rifle and Crossbow-B2, as well as Double XP on November 3. Additional offers may be available at retailer partners worldwide. Check with local retail outlets for further information.

Led by Sledgehammer Games, Call of Duty: Advanced Warfare is being developed for Xbox One, Xbox 360, PlayStation®4, “PS3,” and PC. The title is published by Activision Publishing, Inc. Designed for next gen systems, Advanced Warfare is the first Call of Duty utilizing an expanded three-year development delivering a new experience on all platforms. The title is rated M for Mature with Blood and Gore, Drug Reference, Intense Violence and Strong Language.