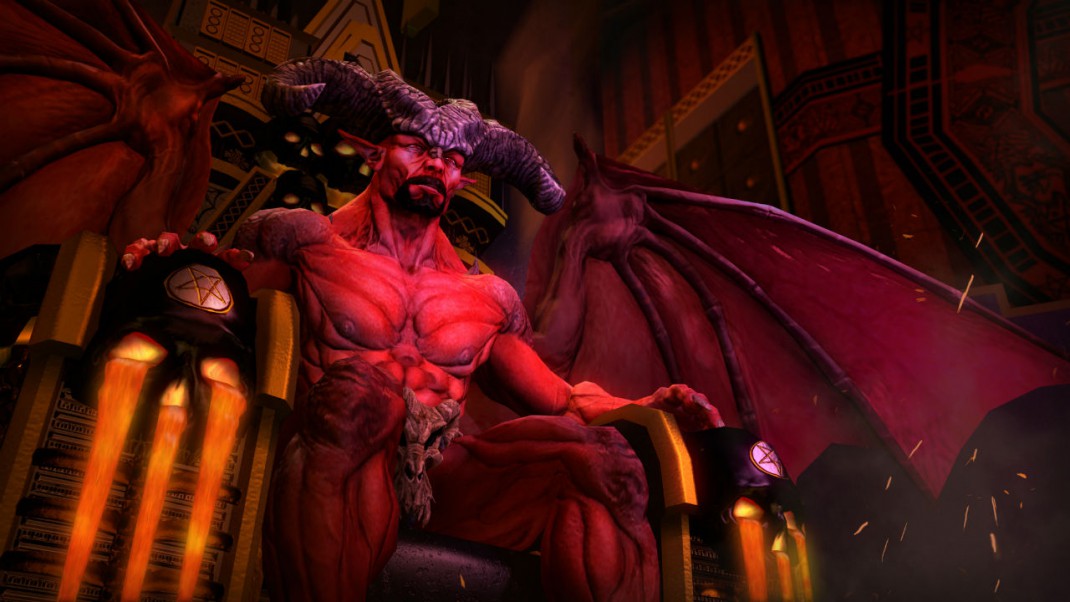 August 29, 2014 – Seattle, Wa.  Johnny Gat is larger than life in Volition’s Saints Row®: Gat Out of Hell standalone expansion, announced today at the Penny Arcade Expo (PAX). In Gat Out of Hell players take on the role of Johnny Gat as he is sent into hell via a nefarious spirit board incident and left to combat demons, the horrors of the underworld (including prominent historical figures) and, of course, the Devil himself.

About Saints Row: Gat out of Hell

After the space faring antics of Saints Row IV, many fans asked what we could do next… the answer? Shoot The Devil in the face. Play as either Johnny Gat or Kinzie Kensington as you tear apart Hell in a quest to save the leader of the Saints soul. Historical icons, old friends, older enemies, a talking gun, a full length musical number, and a whole lot of other shenanigans all await you in the open world standalone expansion playground that is Saints Row: Gat Out Of Hell.

Gat out of Hell is the standalone expansion to the award-winning and multi-million selling Saints Row IV from Deep Silver and will launch on January 27, 2015 in the Americas and January 30, 2015 in international territories for last gen and new gen console platforms as well as PC.

In Saints Row IV, the head honcho of the Saints has been elected to the Presidency of the United States. But the Saints are just getting started. Now the larger-than-life insanity of the Saints series gets a new twist with a catastrophic alien invasion, and the aliens have transported the Saints to a bizarre Steelport simulation. Wield gargantuan superpowers and fight to free humanity from alien granddaddy Zinyaks mental grasp. Escape the simulation thats trapped the Saints crew, or die trying.

With Saints Row IV: Re-Elected, players will now be able to enjoy all the antics of the blockbuster release on their new gen consoles. Re-Elected also launches on January 27, 2015 in the Americas and January 30, 2015 in international territories .

For more information about the Saints Row universe, please visit one of the following official sites: