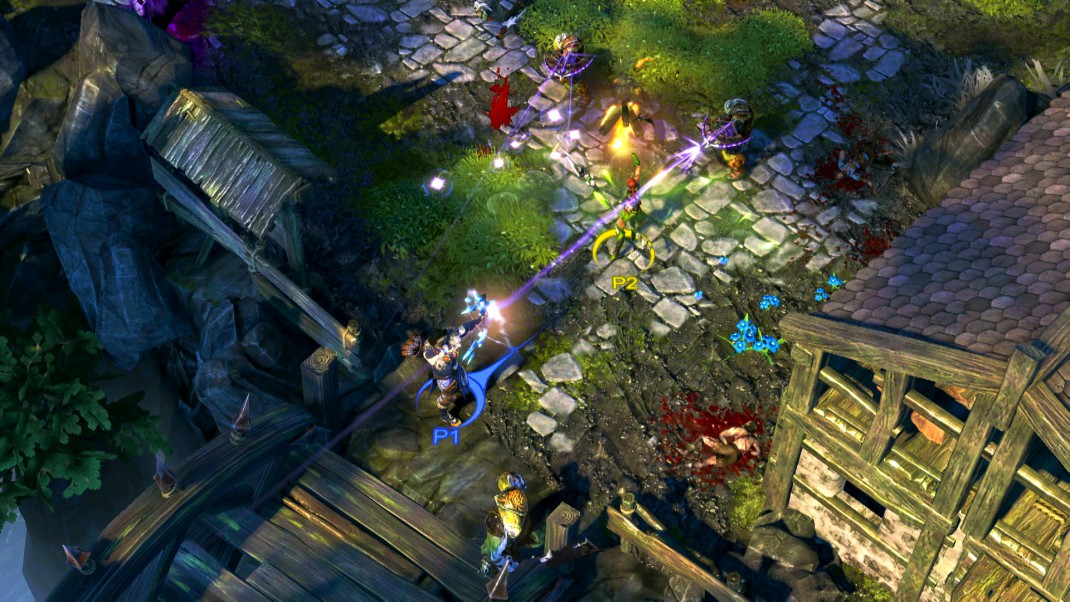 Keen Games and Deep Silver have released their latest incarnation in the Sacred series with Sacred 3. Representing a departure from the action role playing game genre, Sacred 3 has more in coming with Gauntlet then with the Diablo series. While giving the player a solid 10 to 12 hours of game play that can be challenging, the lack of any type of loot system or talent tree system turns what could have been a viable contender for the Diablo 3 market, into a mindless hack and slash with terrible acting. Still, the game play can be challenging and cooperative play is truly cooperative since there isn’t any loot to fight over.

In Sacred 3, you choose one of four heroes to play as through the campaign. These four heroes are based on the four elements and have talents and powers along those lines. Marak represents fire and wields a huge hammer, Claire is a winged paladin with air based attacks, Vajra is an archer with ice spells, and Alithea is an earth based amazon style warrior.

You duty is to defend the land of Ancaria from the Warlord Zane and the Ashen Empire. Zane has promised vengeance on the land of Ancaria for the death of his mother, whom he was planning to assassinate first. The game begins with Zane invading the last free city in Ancaria and stealing the ancient artifact that was housed there. With the help of a fledgling telepath, you and your fellow heroes set out to save the people of Halios and to defeat the Warlord Zane.

The setting of Ancaria is set up very well from the beginning of the game and, for those like me that never played a Sacred game, welcomes the new player with back story so you will understand what is going on from the beginning. The plot of the story is fairly generic with the evil warlord invasion bit, but the writers try to make this fresh and new with their attempt at witty dialogue. This may work for some, but I found the dialogue and especially the acting to be annoying and grating. The weapon spirits in Sacred 3 best exemplify this horrible dialogue and became a factor in my enjoyment of the game.

Sacred 3 is a complete departure of the game play that was found in either Sacred or Sacred 2. Sacred 3 is an incredibly linear game with no loot system, well, at least one that we are used too. Since this was my major issue with the game, I’ll talk about the loot system first. Gone is the day of looking for weapon drops. Each character, as they progress, will receive new weapons. These weapons can be selected before each mission and have different stats to them, but are not randomized at all. What Sacred 3 has for a loot system are the weapon spirits. Weapon spirits are spirits of older adventurers that, when equipped, gives the player a special ability during combat. The spirits are fully voiced characters that will cheer you on during game play. For some this could be a benefit, for me this was pure torture. The spirits’ dialogue is cheesy at best, and can become grating and irritating as the game goes on. I would actually select a spirit on the basis of who was the least annoying to hear, and not on their benefit during combat.

The rest of the game controls are pretty basic for this style of game. You get two abilities to use that are elemental based and dependent on your character. You also receive a hero power that needs to be charged during combat. However, most of the time you will only be mashing the basic attack button. Some enemies do require you to break their guard, meaning you have to hit them with one of your powers first, but these enemies are all marked well so you will be prepared for them. Occasionally, you will knock down an enemy and need to execute him before he gets up. These executions are very easy to pull off and do feel very satisfying in completing. You also get a dodge ability, which only worked for me when it felt like it. I had a hard time controlling the direction of the dodge, and that would lead to frustration during the harder boss battles.

The enemies can be very challenging, especially when the dodge sends you where it wants you to go. Bosses can easily knock you into a corner and have their way with you, so you do have to watch the timing of their attacks and stay out of certain areas during combat. If you are paying attention, then you will not have much trouble with most of the effects during a boss battle. Check points are few and far between, so make sure you are paying attention. With more players, the game play becomes easier, as does the side missions and leveling up your character. If you are doing every mission and side mission, you will soon find that you are out-leveling the curve of the game.

Visually, Sacred 3 is a break from the norm. The colors used in the game are from the brighter palettes this time, not the typical browns, grays, or blacks that we are used to. Sacred 3 is played from the same vantage point as Diablo 3 is, a three-quarter view of the world. I only ran into troubles with the view point when I would go under some form of architecture. The game will outline things in red when you move behind the scenery, but it is still difficult to see what is going on. Just keep mashing attack and you will make it out from behind that building. The game ran just fine on my aging computer, with no lag during multiplayer. Players were able to join in and leave without any frame rate issues or causing lag, which was very nice.

As for the voice acting in Sacred 3, it is by far the worst voice acting and dialogue I have heard all year. The writers tried to go with a cheesy and humorous feel to the dialogue, having the heroes issue quips and jokes during cut scenes and having the weapon spirits have over-the-top personalities. The actors give their dialogue with the hint that even they know just how bad this will sound, so the effort comes off half hearted. If the actors had decided to go into full scenery chewing mode, then it might have worked. However, it just comes off has bad, cheesy, and a complete mess.

Fans of Sacred and Sacred 2, be wary in purchasing Sacred 3. It isn’t the same game style that you have come to know with the previous games. Having more in common with Gauntlet than Diablo 3, Sacred 3 lacks any type of talent tree system for customization, or an equipment loot system that makes these games so enjoyable. That does not mean that Sacred 3 is without enjoyment. As a hack and slash game goes, Sacred 3 is long and challenging, giving the player a solid 10-12 hours of game play. However, that is 10-12 hours of living with the annoying dialogue and horrible jokes of the heroes and the weapon spirits. It would have been great to have a lighter hearted version of Diablo 3 on the market, something that does not take itself too seriously. Sacred 3 just does not pull this off enough to rise above average in my eyes. The writing and acting needed to be much better for this to work. Other than that, Sacred 3 is a solid game that may be worth a look, depending on how thick skinned you are to bad voice acting. Sacred 3 is available now on Steam for the PC.