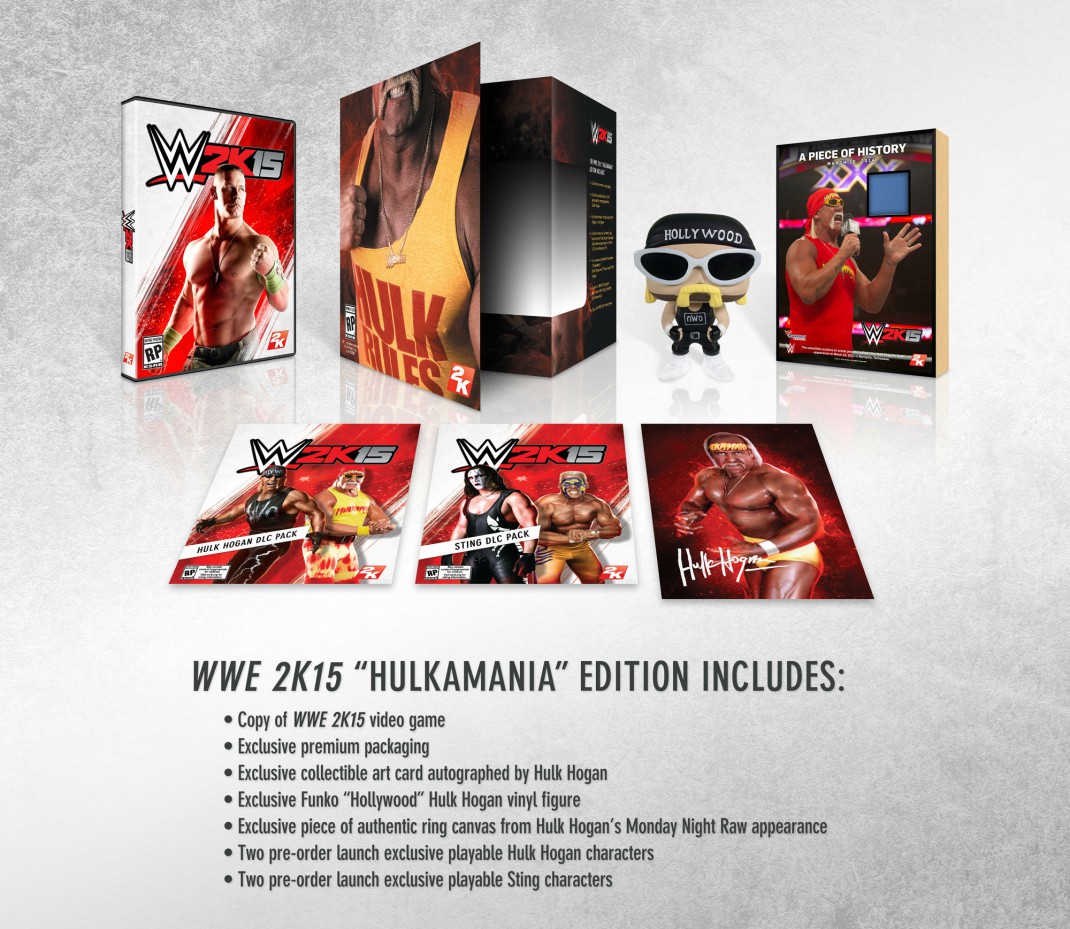 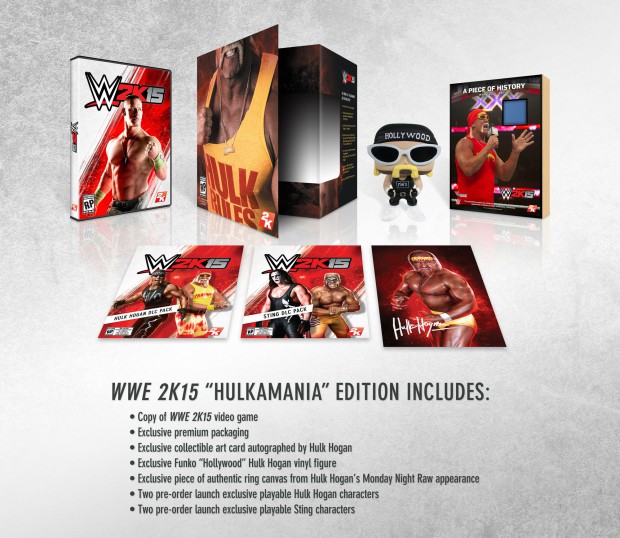 New York, NY – August 5, 2014 – 2K today announced that WWE Hall of Famer, Hulk Hogan®, will be featured through the “HULKAMANIA” Edition of WWE® 2K15, the forthcoming release in the flagship WWE video game franchise. The edition will be available exclusively for the PlayStation®4 computer entertainment system and Xbox One, the all-in-one games and entertainment system from Microsoft, while supplies last, for a suggested retail price of $99.99.

The WWE 2K15 “HULKAMANIA” Edition will include the following items:

“Twenty-five years ago, I appeared in my very first WWE video game, and I’ve never been more excited than I am now to be part of this year’s game,” said Hulk Hogan. “I’ve got one thing left to say: whatcha gonna do when the WWE 2K15 ‘HULKAMANIA’ Edition, featuring the greatest of all time, runs wild on you, brother?”

From early matches with opponents like Andre the Giant, “The Million Dollar Man” Ted DiBiase, Ultimate Warrior, “Macho Man” Randy Savage and “Rowdy” Roddy Piper, the emergence and popularity of “HULKAMANIA” spread like wildfire, as fans embraced Hogan’s signature appearance, charismatic personality and renowned moves.  After time away from the ring in the early ’90s, Hogan returned as “Hollywood” Hogan and developed a handful of new rivals, including The Rock®, Sting and Goldberg. In 2005, after decades of success, Hogan was inducted into the WWE Hall of Fame.

Hogan’s influence in pop culture extends beyond the ring, as he has lent his time to several film, television, music, radio, restaurant and charitable projects. From Hulk Hogan’s Rock ‘n’ Wrestling cartoon series to his role as Thunderlips in Rocky III, or his groundbreaking Sports Illustrated cover and highly-rated reality television series, Hogan Knows Best, Hogan has cemented himself as a notable, relatable and iconic celebrity recognized and adored by millions worldwide.

“With an illustrious and storied career, a name forever etched in the WWE Hall of Fame and a persona immortalized by fans around the world, Hulk Hogan remains one of the most recognizable and memorable competitors in WWE history,” said Chris Snyder, Vice President of Marketing at 2K. “Hogan truly deserves a ‘HULKAMANIA’ Edition of WWE 2K15, and this comprehensive offering is a must-have for any WWE fan.”

Developed collaboratively by Yukes and Visual Concepts, a 2K studio, WWE 2K15 is not yet rated by the ESRB. WWE 2K15 is currently scheduled for release on PS4™ and PlayStation®3 computer entertainment system, as well as Xbox One and Xbox 360 games and entertainment system from Microsoft, on October 28, 2014 in North America and October 31, 2014 internationally.