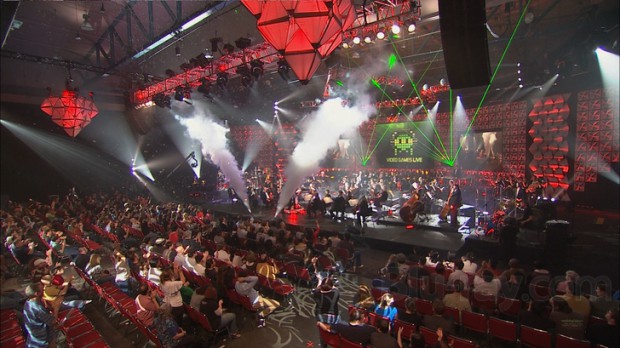 JULY 19, 2014 — Video Games Live is proud to announce it’s line-up and Special Guests for our show happening next Thursday, July 24th with the San Diego Symphony at the Embarcadero Marina Park South (right behind the Convention Center where Comic Con is being held!).

The performance will include…

The WORLD PREMIERE from the yet to be released new Blizzard Entertainment franchise Heroes of the Storm conducted by legendary Blizzard composer Glenn Stafford!

Performing the music from the popular Nintendo DS game Cave Story including an appearance by the game creator and popular Japanese game designer Daisuke Amaya (“Pixel”).

Composer Frank Klepacki to join the symphony on guitar to perform his music from Command & Conquer: Red Alert.

Garry Schyman to conduct his award winning music from BioShock.

All of the Special Guests will be available to meet after the show during our Meet & Greet which is open to all ticket holders.

Come early for the Costume Contest as well as games provided by Game Stop!

TICKETS ARE STILL AVAILABLE AND CAN BE PURCHASED HERE!
You do NOT need a Comic Con pass to attend Video Games Live.  Anyone can purchase tickets to the performance.

There are a limited number of ULTIMATE GAMER V.I.P. BACKSTAGE EXPERIENCE PACKAGES still available!  Amazing access and gifts!  More info and tickets HERE!
(Please note: This is a separate package and does NOT include a ticket to the show.  Tickets to the show must be purchased separately)

Please tell us what you are most looking forward to!
Video Games Live Facebook Events Page for the San Diego show:
https://www.facebook.com/events/1539361296290097/

If you have not yet been to a Video Games Live performance or are not familiar with the show, here is a description followed by a few of our best trailers over the years…

The best way to describe Video Games Live™? Picture the energy and excitement of a rock concert mixed with the power and emotion of a symphony orchestra combined together by the technology, interactivity, stunning visuals and fun that only video games can provide. Completely synchronized cutting-edge video screen visuals, state-of-the-art lighting and special fx, stage show production and special on-stage interactive segments with the audience dazzle crowds of all ages – gamers and non-gamers alike.