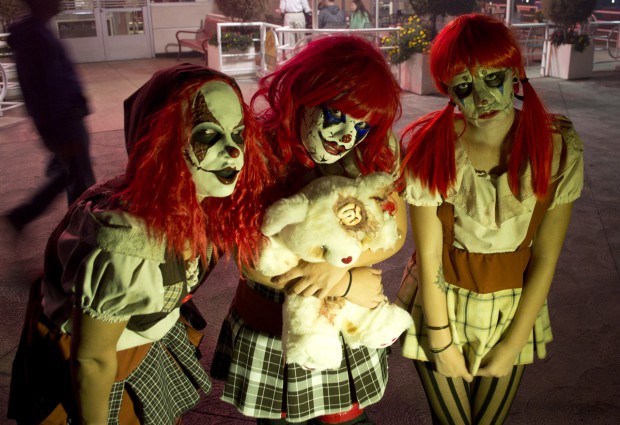 BUENA PARK, Calif. (June, 2014) – Knott’s Scary Farm, the largest, most haunted experience in Southern California, returns for 24 horrifying nights September 25 – November 1 and features the return of Elvira, the legendary Mistress of the Dark, endless horrifying mazes, and a thousand monsters lurking in the fog.

Back by overwhelming demand, Elvira, the legendary Mistress of the Dark, will headline the 1,800 seat Ghoul Time Theater twice nightly through the entire run of Scary Farm.  Elvira’s all-new show will feature her signature blend of comedy and sass, along with singing, dancing, and explosive special effects!

Elvira’s reign as the “Queen of Halloween” began in 1981 when she became the hostess of the local Southern California television show “Movie Macabre,” and went on to become the most widely recognized horror host in history.  In 1982 she became the Knott’s Scary Farm headliner, following in the footsteps of Sinister Seymour and Wolfman Jack.  Elvira again returned to Knott’s Scary Farm in 2013 to overwhelming demand for her smash show, Elvira’s Sinema Séance.

Also returning in 2014 are the terrifying secrets behind the locked doors in Skeleton Key Rooms.  First introduced in 2013, Fright Lane with Skeleton Key offers front-of-line access to all mazes and unlocks unnerving terrors in exclusive scenes in select mazes.  This year, Knott’s Scary Farm Skeleton Key rooms will be entirely new and more frighteningly interactive than ever.  Also new this year is the collectible keychain that commemorates your harrowing journey through the Skeleton Key rooms (while supplies last).  Fright Lane with Skeleton Key will go on sale with Knott’s Scary Farm tickets later this summer, and join the conversation using #ScaryFarm.