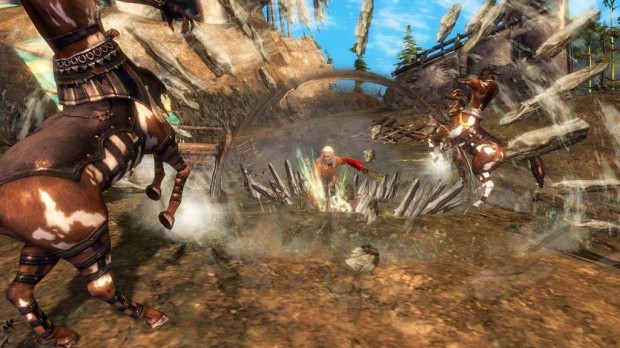 BELLEVUE, WA – May 13, 2014: ArenaNet, developer of the acclaimed Guild Wars franchise, today took the stage at a Guild Wars 2 event in Beijing to announce the China launch and reveal that its next release is an in-game festival celebrating China for players around the world. At an event studded with Asia stars, ArenaNet and China-based game publisher KongZhong announced the game officially releases in China on May 15 of this year. Guild Wars 2 is launching there as a one-time purchase packaged or digital game with no subscription fee, the same business model the game uses in the West but a trailblazing approach for the China MMO game market. ArenaNet then used the stage in Beijing to reveal “Festival of the Four Winds,” the next new release coming to Guild Wars 2 players in North America and Europe on May 20. ArenaNet president and co-founder Mike O’Brien previewed a teaser trailer and introduced the release as the game’s first truly global game update.

“We wanted to provide the best possible MMO experience for Chinese players, so we joined forces with KongZhong, an ambitious partner who shared our passion for quality,” O’Brien said. “Together we’ve spent eighteen months preparing – meeting with Chinese players and guild leaders to get their feedback, and working on every little detail of the game. Finally we’re ready to open our arms and join with China as one global community.”

At the event in Beijing, which is still ongoing today during early business hours across the West, ArenaNet and KongZhong are sharing the stage with China super stars, major global brands participating in the game’s launch, and a 30-foot statue of legendary Guild Wars character Rytlock Brimstone. The event’s biggest celebrity performer is singer and songwriter Jike Juan Yi, or Summer, a China super star who KongZhong enlisted to be a prominent Guild Wars 2 spokesperson in launch ads and videos. As a treat for both her fans in China and Guild Wars 2 fans around the world, Summer recorded a music video blending live action and game play to debut a Chinese version of the Guild Wars 2 anthem “Fear Not This Night.” She is to perform the song live at the Beijing event.

In the upcoming release “Festival of the Four Winds,” the Zephyrites have returned to honor the spirit of their trade agreement with Lion’s Arch, a reprieve for the game’s trading hub and cultural center. Lion’s Arch is largely destroyed and still reeling from the devastating attack by Scarlet to end the last series of updates to Guild Wars 2. In “Festival,” players participate in challenges and activities to help raise funds to rebuild the city they helped defend. That includes taking on challengers in the return of Queen Jennah’s Gauntlet, where they can earn rewards by fighting new foes.

ArenaNet and KongZhong are ensuring that players in China share the same Guild Wars 2 experience as their counterparts around the world. Starting with “Festival of the Four Winds,” ArenaNet is synchronizing updates for China to receive new content within days of release in the West. The companies have put painstaking effort towards not just localizing but customizing the game for China, translating millions of words, dubbing tens of thousands of voice over lines, and refitting hundreds of game features and systems. The attention to quality along with Guild Wars 2’s success in the West have been a big part of KongZhong’s campaign, sending the message to players that China is primed for premium MMO games, and watching it resonate among China press who have named Guild Wars 2 as one of the most anticipated games of the year.

Guild Wars 2 officially launches in China on May 15 at 10:18 a.m. Beijing time, drawing on the luck Chinese culture ascribes to the number eight.

Guild Wars 2® is a visually stunning MMO that offers players the epic grandeur of a massive role playing environment combined with innovative combat mechanics, dynamic events, and customized personal storytelling. Building on the success of Guild Wars, NCSOFT and game developer ArenaNet™ have created an MMO that lets gamers play the way they want, while at the same time retaining the no-subscription-fee business model that made the original Guild Wars so popular.

For more details on Guild Wars 2 and its releases, please visit www.guildwars2.com.