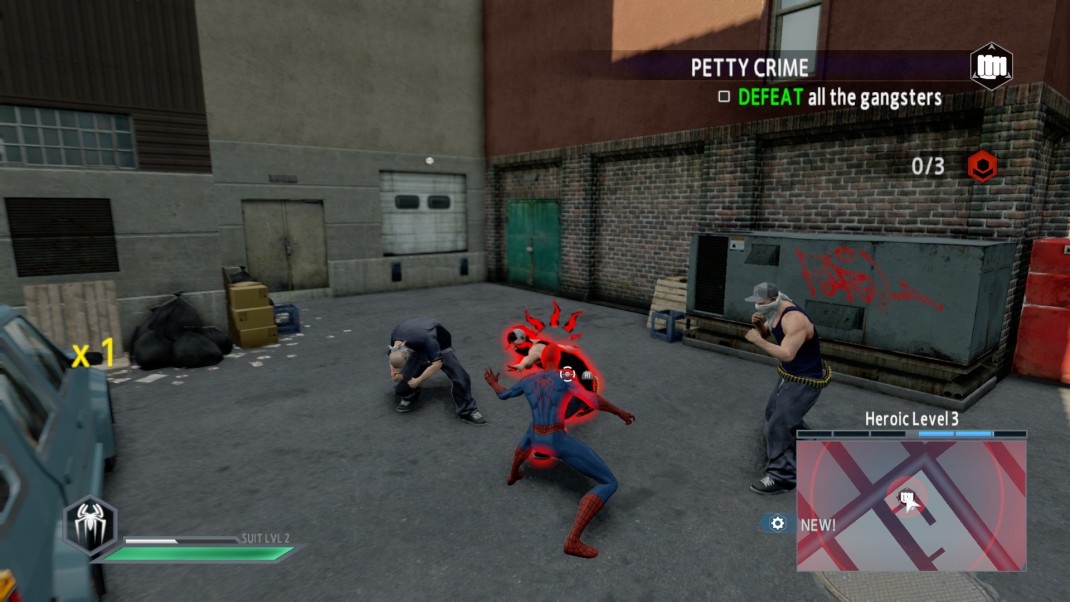 Our friendly neighborhood Spider-Man has been around in movies, television and video games for decades and he always has his young, sarcastic wit and super-human abilities. Still, when it comes to video game titles based off movies there is a stupendous fail rate. The recent exhumation of all the buried E.T. Atari cartridges in the desert is the supreme example of this. If you tell someone you are about to play a super hero game they smile, then when you tell them it is the tie-in to the latest movie they cringe! That brings up the question, can the world’s favorite web-slinger survive the curse?

Hands On:
Fret not, true believer, the makers of The Amazing Spider-Man 2 approached the game as one part comic, one part movie tie-in, and one part super hero game. To start with there are cutscenes and witty comments that feel like a comic book. The voices are mostly cartoony as is the dialogue to make sure this game played to the true fans of Peter Parker and his alter-ego. It is done so well I wouldn’t be surprised if the comic decided to add the storyline to its hallowed pages.

The game is setup in a sandbox style so you have missions which directly relate and tie to the movie’s plot but at the same time there are tons of side missions and challenges to do. These side missions fit in with all the best sandbox games these days. Playing the main storyline will feel like playing out the movie as film tie-ins should but the sandbox freedom makes it so that it doesn’t seem like just a retelling of the movie on rails which is where a lot of film games go wrong.

Spider-Man gets to use his most recent film suit but he can also use his originals such as his coat with a red ski mask and the one that was his first actual Spider-Man costume that got shredded up. He can also unlock new suits, each with strong points and weaknesses, as well as the ability to be leveled up. So, for example, one of his suits add a lot to stealth ability for when he has to sneak past an enemy. Another suit is all about power and critical hits. Doing side missions, challenges, and objectives will increase the suit’s level and unlock your abilities, giving you a better chance at completing the main quest line.

Spider-Man has the spider sense, part of which will let him know if an enemy has sighted him and plans to attack and another part that shows you where enemies are nearby. It also shows you which way they are facing and how aware they are of you being there. At this point for gamers who like to run the gambit of super hero games things should really have begun to sound familiar. These are all things that the Batman: Arkham game series have perfected and implemented a while ago. The Dark Knight has even developed a way of using the bat claw that makes you feel like you are swinging from a web and the exact same technique is used in The Amazing Spider-Man 2. This “enemy sense” and radar have been used in other games like Assassin’s Creed and Dark. It really brings up the concept that if it works well and fits the play model, why not use it? So what if it is the same technique in all the games as long as it is successful. Plus, it makes the game’s learning curve a lot faster which helps make your gameplay smoother.

Spider-Man has some of his own unique moves, and web-swinging throughout the city has to be one of the most fun. It takes a little getting used to, especially if you want to get a particular place the temptation can be to use the webshot (bat claw) technique and shoot from perch to perch or scale building after building (a technique perfected in Saint’s Row The Fourth). It is really easy to overshoot your turns or miss a web when trying to make one. Once you get the hang of it though you will find the thrill that Spidey always exhibits when he is doing it.

Your web-shooter soon becomes your best friend in fighting since you come to a gun fight in your tights. There are a lot of different techniques you unlock and some are fun to do just for the heck of it and some are the only way to beat mini-bosses. I won’t give too much of this away, discovering these powers and their best uses is one of the greatest parts of the game and had me walking around pretending to shoot fake webs between game times. As a kid my best friend had web-shooters that shot silly string… I was jealous of it then and I am even more jealous of it now.

I have to mention that I love Stan Lee cameos in all things Marvel and this is probably one of the best ones of all time. Excelsior!

Last Call:
I’ve learned we no longer have to fear the movie tie-in games because developers have gotten the point that they can create their own games with all their favorite gameplay styles and techniques and still work in the story. It has been said that “Life is what happens between the panels” and that is so true in a well done video game based on a comic or a movie. Tell the story but make the character breath by his action outside the storyline. The Amazing Spider-Man 2 is a great game, a blast to play, and worthy of the franchise’s name.