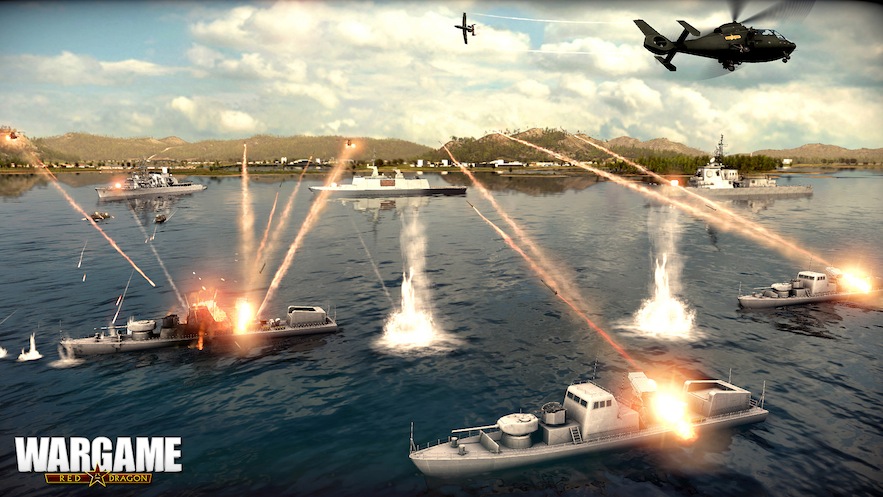 Do you love the smell of napalm in the morning? Feel that your current real time strategy game has a decidedly less tactical feel to it? Are you one of those people that would just like to watch the world burn? Then do I have a game for you! Wargame: Red Dragon, developed and published by Focus Entertainment and Eugen Systems, is a tactical real time strategy game that gives you the chance to participate in fictional conflicts during the 1980’s in Asia. What really sets Wargame: Red Dragon apart is the spectacle of combat. It is stunning to watch the battle unfold in front of you, as tanks erupt into flames and entire forests are burned to the ground. This game screamed out to the historian in me, it is just too bad that I am absolutely horrible at these types of games.

The single player campaign in Wargame: Red Dragon is based on five fictional scenarios that are based on actual, historical events that occurred right around the 1980’s in Asia. The five campaign stories include campaigns such as a North Korean invasion of South Korea during the 1987 presidential election, a border war between the USSR and China over Vietnam, and Margaret Thatcher taking on the entirety of the Chinese military over Hong Kong. Each campaign has a difficulty setting that allows players to move into the game at their own pace. Unfortunately, the artificial intelligence has a tendency to employ the same tactical decisions over and over again, so if you can keep those in mind, you will be able to predict the A.I.’s troop movements.

The campaigns have an over view map of the entire campaign battle field, that is made up of smaller territories that you will fight over once you come into contact with the enemy. Each campaign has an over all objective to complete, then each battle has a similar objective that you must reach in order to win that battle. Most objectives are either destroy a particular percentage of the enemy or capture a particular point. The campaign itself is broken down into turns, so you get to move your troops then the A.I. gets to respond. When the smaller battles begin, you get a choice as to whether you want to play that particular battle yourself, auto resolve the battle, or just flat out surrender that territory. Your actions and the results of that battle then determine the current look of the overall conflict, including troop resources and availability of military assets. 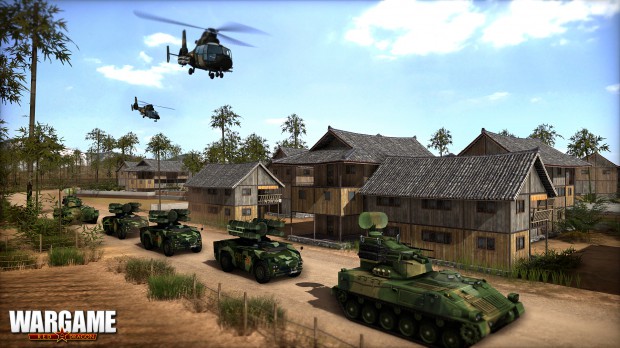 Each campaign has an introductory video that explains the background to each conflict. The Busan Pocket campaign begins with President Chun Doo-hwon selecting his successor. This leads to the June Democracy Movement in South Korea. Where the actual movement was resolved with little to no violence, Wargame: Red Dragon takes history down a different path. Chun Doo-hwon violently puts down the the June Democracy Movement, leaving an opening for an invasion by North Korea into an already chaotic situation, and this begins open conflict between the two Koreas and the United States forces in South Korea.

I really enjoyed the alternate history angle of Wargame: Red Dragon. It is fun to take actual military vehicles and troops into a conflict that is based on actual historical events, but with a twist. I loved taking on China as the U.K. over Hong Kong, in an event that never occurred just to see how history could have turned out.

I wrote a little bit on how the campaign is set up in the Story section, so I’m going to focus more on the actual game play and the other items that Wargame: Red Dragon has to offer. The battles in Wargame: Red Dragon play out like most real time strategy games do, with proper troop selection, meeting your opponent head on, and killing every single one of his or her troops. The major different with Wargame: Red Dragon is the shear number of troops and types of items you have in your arsenal. You have access to tanks, infantry, support, air support, recon, and navy; Wargame: Red Dragon’s newest troop type.

Battles have a very tactical feel to them. You begin by placing your troops in your home sectors, then decide how to confront your enemy. Troops are not seen until your troops can see them. This is were the recon section of your force pays off. Recon helps identify troop types early and can see where your enemy is moving. This allows you to counter act with troops that are strong against his troops. Wargame: Red Dragon does have a little bit of a “paper, rock, scissor” feel to it, in that I mean you have troops that are strong against certain groups, but weak against others. It never feels cheap due to the vast amount of troops that you have at your fingertips.

Movement and combat are treated the same as most rts games on the market, using the click and drag method to select your troops, then right clicking to either move or enter combat. The maps are massive to the point that it actually takes away from the spectacle of the battle. You can zoom into a section of the map and see your troops lock into deadly combat, but as you are watching the visual spectacle of an entire bridge disappear under a airstrike, your enemy has moved their forces into a flanking position. You have to watch the entire battle unfold zoomed out, and select the moments to zoom in and appreciate the carnage.

Wargame: Red Dragon has some nice game modes that will keep you entertained for a while. Besides the solo campaign, there is a troop builder that allows you to customize your forces, tutorial screens to help prep you for the conflict ahead, and a full multi player mode that can set you up in huge battles against other people. Multi player played fantastic on my machine, and I encountered no issues what so ever, except just getting crushed every time I played. I thoroughly blame my Soviet troops, they just weren’t up to the challenge.

The aesthetic funds went right into the actual visuals during game play, and not in supporting the solo player campaign, that much is obvious. The graphics in game are just amazing, from the way the light shines off of the ocean, to the visuals of the destruction that occurs on the battlefield. The solo player campaign does have video that helps set up the story of the campaign, but then reverts to just pictures of people standing there with test boxes. The video is fully voiced, but the rest of the story is all text. It does kind of make the campaigns feel a bit more lackluster, especially in comparison to Starcraft II, but the in game graphics are a treat to behold.

Sound design, in game, is just as impressive. The narrator does a decent job in telling the background story over the video, but it begins to feel a little too much like that boring tenth grade History teacher you had back in high school. This game is designed for the historical, tactical real time strategy fan and not some someone looking for casual thrills. You have to pretty much care about history it get into the aesthetics of this game.

Wargame: Red Dragon is a fantastic game that does a lot of things right, but is just a hair under being absolutely perfect. The game is visually stunning while you are in combat, and the amount of troop choices makes each battle completely different. You have to think each battle through tactically, using recon to get an early fix on your opponent then respond using the correct troop type. Nothing looks quite as impressive as an A10 Warthog flying in low over a column of tanks. It just feels good to see the world burn after a pass like that. On the downside, the solo player campaign could use a little bit of aesthetic thought to bring in some more of the non-hardcore history buffs and the naval battles feels just off compared to the land and air combat. Wargame: Red Dragon is a definite must buy for fans of the tactical real time strategy genre and anyone that is interesting in re-writing history.