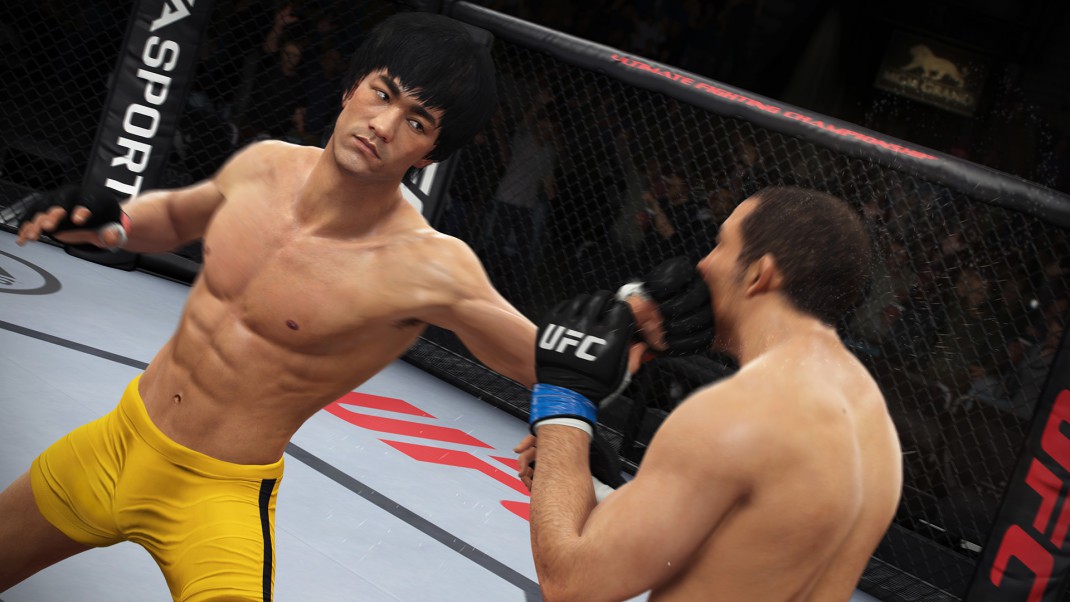 REDWOOD CITY, Calif., – April 7, 2014 – Electronic Arts Inc. (NASDAQ: EA) and the Ultimate Fighting Championship (UFC®) announced today that Bruce Lee, “The Father of Mixed Martial Arts”, will make his historic first step into the Octagon® in EA SPORTS™ UFC, launching June 17, 2014. Fans can pre-order today to get instant day-one access to Bruce, or they can complete the game’s career mode at Pro difficulty to unlock him.  Players can fight with the legend across four different weight classes and test his legacy against the best of the best in the UFC. To see Bruce Lee realized in game, watch the EA SPORTS UFC Gameplay Series: Bruce Lee Reveal, the first cinematic trailer from EA SPORTS UFC that was released today. For more information on the Bruce Lee pre-order offer, please visit http://o.ea.com/20562.

“I am so excited about this opportunity to bring my father back to videogames!” said Shannon Lee, Bruce Lee’s daughter, CEO of Bruce Lee, LLC and Chairperson of the Bruce Lee Foundation. “I’m thrilled that fans can now interact with him in a new way. TheEA SPORTS UFC development team has been incredible to work with, and they’ve done a great job capturing the look and feel of my father. I think people will love getting a chance to fulfill a fight fantasy by playing Bruce Lee in the new UFC game.”

“There’s no debate, Bruce Lee is the father of mixed martial arts,” said Dana White, UFC President. “He believed not one style of fighting was the best and that you had to have a little piece of everything to be a complete fighter. He was proven right when the first UFC event took place in 1993.”

“It has always been part of our vision to have Bruce Lee, the most iconic martial artist of all time, in the first ever EA SPORTS UFC,” said Brian Hayes, Creative Director, EA. “The team is very excited and tremendously honored to have the privilege of bringing Bruce Lee to life in our game. We’ve been working closely with the Bruce Lee team to ensure we represent the legend with as much visual and gameplay fidelity as possible.”

Powered by EA SPORTS IGNITE technology, EA SPORTS UFC is built from the ground up exclusively for Gen 4 platforms, EA SPORTS UFC captures the human athleticism, physiology and emotion of the athlete like nothing before it. Step into the Octagon® and Feel the Fight with every strike, takedown and submission.