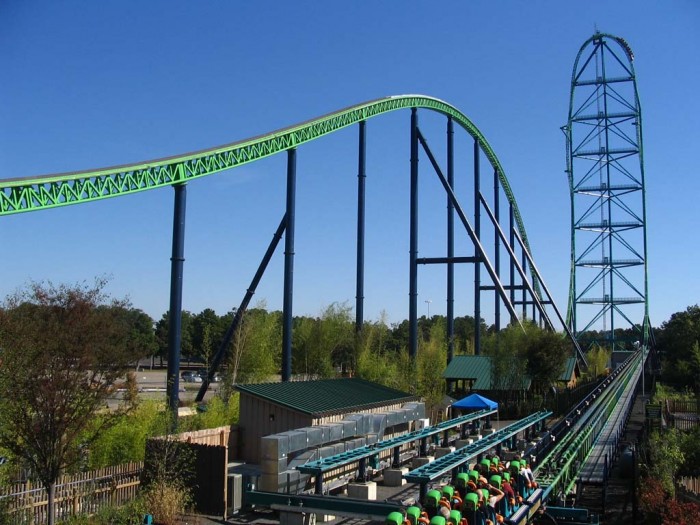 Spring Break—April 12 to 21 — Six Flags Great Adventure and Safari opens for the 2014 season with Spring Break. The park will operate daily from April 12 through 21 from 10:30 a.m. to 8 p.m. The adorable lion cub trio being hand raised by the Animal Care Team will make their debut in the Safari Off Road Adventure’s Camp Aventura section, weather permitting. Guests can celebrate spring on their favorite roller coasters, such as El Toro, Nitro and GREEN LANTERN.

Easter Weekend presented by PEEPS® – Egg Hunt April 19
On Saturday, April 19, Six Flags will host a special Easter Celebration giving guests the chance to search for eggs filled with PEEPS®. The morning event will also include onsite entertainment, games and giveaways. The first 100 guests (toddlers to age 12) to arrive by 9:30 a.m. will receive a PEEPS® Egg Hunt Participant Wristband and up to three spectator wristbands for friends and family members to join in the celebration. All participants and spectators must have valid park admission to receive a wristband. The event will take place at 10 a.m., prior to park opening.

Jason Derulo in Concert – April 20
The park’s concert series kicks off with chart topper Jason Derulo on Easter Sunday, April 20, presented by Coca-Cola. Derulo entered the music scene in 2009 with his self-titled debut album and has since sold more than 14 million tracks in the U.S. and racked up more than 700 million views on his YouTube page. Derulo’s pop/R&B hits have earned him MTV Video Music Awards, Teen Choice and American Music awards since 2010, and most recently landed him on the Billboard Hot 100 with “The Other Side, “Marry Me” and “Dirty Talk.” Doors open at 3:15 p.m. and the show begins at 4 p.m. and is free with Season Pass or theme park admission in the Plymouth Rock Assurance® Arena (formerly the Northern Star Arena) at 4 pm.

Safari Off Road Education – April 22, 23, 29, & 30
Now incorporating the new Safari Off Road Adventure, Six Flags takes students grades K-6 on a journey in learning with 1,200 animals from six continents through the 350-acre wildlife preserve lead by experienced tour guides. This program takes place on non-operating days when the theme park is not open and is limited to 400 students per day. Tickets are $19.99 + tax per person.

Biology Day – April 25
Six Flags is proud to bring biology students up close and personal with 1,200 animals from six continents in the 350-acre wildlife preserve, and marine mammals such as California sea lions and Asian small-clawed otters in the theme park. Experienced safari tour guides and marine mammal experts lead the day, and complete it with a fun and interactive game show in Showcase Theater. This event takes place on exclusive education days when the theme park is only open for schools/educational groups.

Six Flags Step Invitational – April 26
The Six Flags Step Invitational will feature teams of all ages from New Jersey competing with fancy footwork for cash prizes and bragging rights. The event takes place on Saturday, April 26 and tickets include entry to the park and competition. For ticket and registration information, visit www.njstepteam.org

Fast Tracks and Food Trucks Festival – April 26 & 27
At this new festival, guests can enjoy a variety of cuisines ranging from barbecue and tacos to hibachi and sliders, plus sweets including gourmet waffles and cupcakes. More than 20 trucks will be available from 12 to 7 p.m., and seven award-winning New Jersey wineries will also be on hand from 1 to 6 p.m. for sampling and wine purchases. The festival is included with theme park admission; wine sampling and food requires an additional fee. Tickets may be purchased online with the promo code TRUCK.

For more information, guests can call 732/928-1821 or visit www.sixflags.com/greatadventure