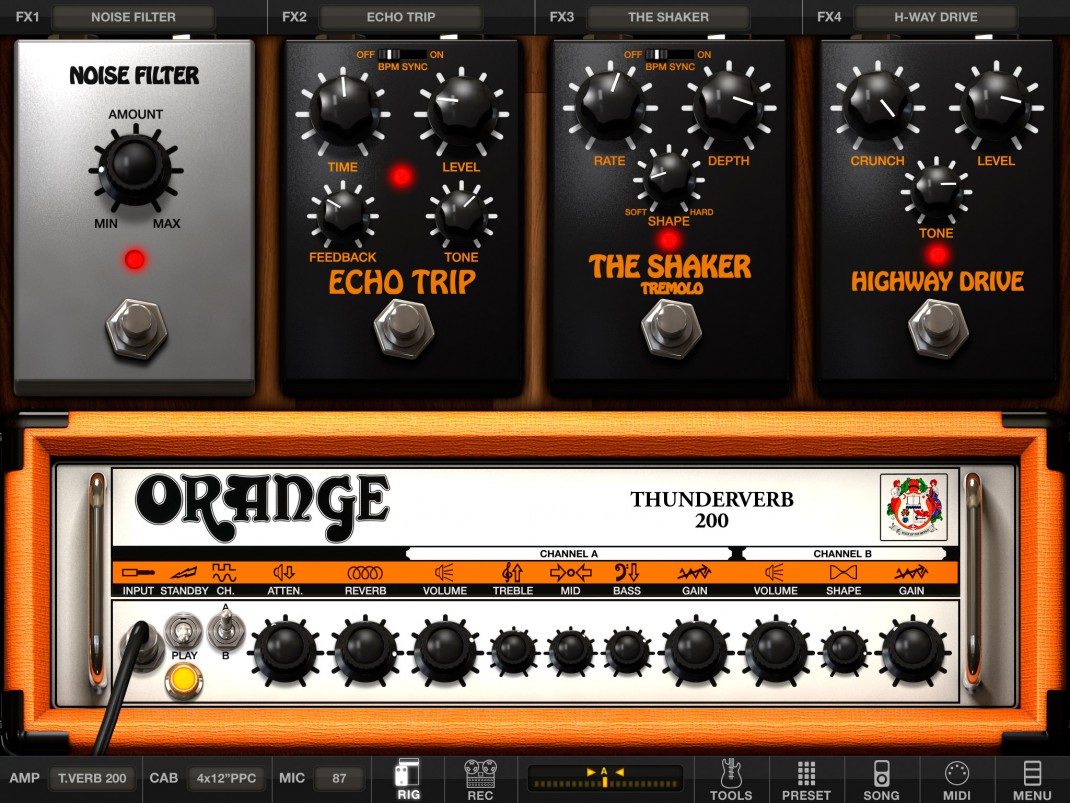 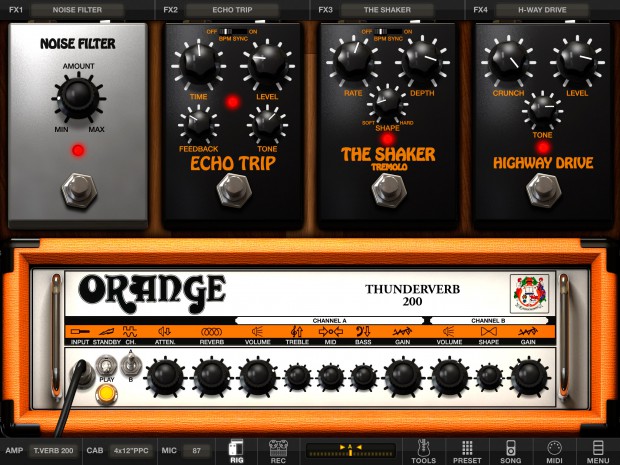 April 3, 2014 – IK Multimedia, the leader in mobile music-creation apps and accessories for iOS devices, is pleased to announce a new iPhone, iPad and iPod touch app that will delight Orange Amplifier fanatics around the globe: AmpliTube® Orange® for iPhone/iPod touch and iPad.

Officially licensed and developed in close partnership with Orange Amps, AmpliTube Orange is a real time mobile Orange Amplifier and effects studio featuring digital models of 5 classic and modern Orange guitar amplifiers and one Orange bass amplifier. Each amp and cab model has been meticulously recreated in both looks and sound to deliver spot-on Orange tone any time, everywhere.

AmpliTube Orange also features perfectly matched Orange speaker cabinets as well — the 4x12” PPC, 1x12” PPC, 2x12” PPC, 2x12” AD30 and the 1x15” OBC. The cabinets are individually selectable, so they can be mixed and matched with other amp heads for different sound possibilities.

Recording Studio
After dialing in their favorite tones, players can start recording thanks to AmpliTube Orange’s built-in recorder. The recorder section can be expanded via in-app purchase (4 tracks on iPhone/iPod touch, 8 tracks on iPad) for multi-track recording and composition. The full recorder features a bounce function that frees up tracks for limitless recording, and a master effects section with global reverb, EQ and compression. Players can record complete compositions without leaving AmpliTube Orange.

AmpliTube Orange is also Inter-App Audio and Audiobus compatible, so it can be used as an input or effect in other compatible audio apps like GarageBand, making it perfect for injecting Orange tone into other audio environments.

Practice Buddy
AmpliTube Orange is also the perfect practice tool, thanks to its built-in “Song” section. The Song section allows a user to import any audio from their device iTunes library and play along. It features a “no voice” button that cancels the center portion of the stereo field (where most vocals and leads are placed) making soloing over existing recordings a breeze. There’s also a speed control that allows users to slow down (or speed up) audio material without changing pitch, allowing players to learn difficult passages or enhance their speed and precision.

Standalone or AmpliTube in-app
AmpliTube Orange is available as a standalone app from the App StoreSM, an “in-app” purchase bundle within AmpliTube, or individual amps and effects can be purchased a-la-carte as in-app purchases within AmpliTube. This gives players the flexibility to choose the bundle or individual models as their needs change.

Plugging In and Control
With IK Multimedia’s range of interfaces and controllers for iPhone, iPad, iPod touch and Mac/PC, getting a guitar signal toAmpliTube Orange is as simple as plugging into an amplifier. iRig HD and iRig PRO are the newest digital interfaces that allow players to plug into an iPhone, iPad, iPod touch and a Mac or PC and deliver pristine quality pure guitar signal. iRig BlueBoard is the advanced Bluetooth® pedalboard that allows for control of presets and sound parameters in AmpliTube, wirelessly, from the floor, without laying your axe down.