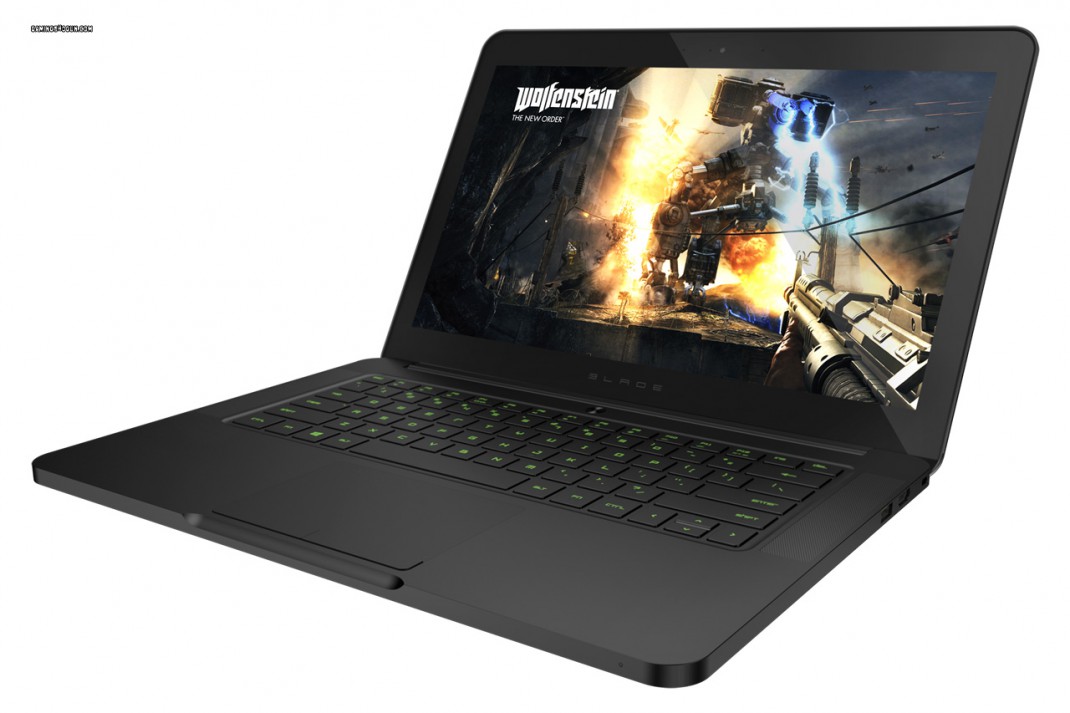 CARLSBAD, Calif. – Razer™, the world leader in entertainment devices and software, today announced the latest Razer Blade now comes with the highest resolution 14-inch display available in a laptop. The stunning 3200×1800 touchscreen display features a record 5.76 megapixels, sharply exhibiting even the finest details and text with 262 pixels per inch.

Blending retina-tearing clarity with ultimate functionality, the Razer Blade is also equipped with a 10-point capacitive multi-touch screen that works seamlessly with the new touch interface in Windows 8.

“The Razer Blade sets the benchmark by which all laptops should be measured,” says Min-Liang Tan, Razer co-founder, CEO and creative director. “The Razer Blade, the world’s thinnest and most powerful gaming laptop, now comes with the best 14-inch notebook display on the planet.”

Measuring just 0.7-inches thin, the Razer Blade also packs more power-per-cubic-inch than any other laptop in the world. The Razer Blade boasts frame rates  that are up to 70 percent better than the previous iteration with the latest NVIDIA® GeForce® GTX 870M GPU. The Razer Blade is powered by a 4th gen Intel® Core™ i7 processor and uses solid-state storage technology for boot speeds up to four-times faster than a traditional notebook hard drive. Constructed in a rugged all-aluminum chassis, the Razer Blade features a custom-designed track pad and backlit gaming- grade keyboard that has full anti-ghosting capabilities and programmable keys powered by the revolutionary Synapse 2.0 software.

“The Razer Blade laptop screams premium design and top-notch performance, and we are as happy as can be outfitting such a beautiful and powerful machine with our latest graphics processor,” says Brian Choi, NVIDIA Sr. product manager. “With nearly twice the graphics horsepower compared to last year’s model, the Razer Blade will be one of the most visually stunning, yet portable, gaming laptops the world has ever seen.”

The ultra-portable laptop features 8 GB of fast 1600 MHz DDR3L memory and comes standard with 128 GB of total solid-state storage with options for a 256 GB or 512 GB SSD. The Razer Blade also comes with Dolby® Home Theatre® v4, featuring immersive audio-quality output that is custom-tuned to deliver a cinematic sound experience.
The Razer Blade delivers up to six hours of battery life and includes the latest high-performance 802.11ac wireless connectivity.

The 14-inch Razer Blade embodies Razer’s continuing drive to design the world’s best gaming laptops for those that need insanely powerful performance, the thinnest form factor and the highest resolution screen to game anywhere, anytime. Razer sets out to do the impossible without compromising performance and, with the Razer Blade 14-inch laptop, users are able to do more than ever before on an ultra-portable system.

The Razer Blade is now available for pre-order. For more information, go to www.razerzone.com/blade.

For more information about the Razer Blade, please visit www.razerzone.com/blade. CARLSBAD, Calif. – Razer™, the world leader in entertainment devices and software, today announced it has enhanced its award-winning Razer Blade Pro laptop with next-generation graphics capabilities and a suite of new applications designed for professionals and gamers.

At the heart of the Blade Pro is a full-HD, 17-inch LED main display working in-tandem with the award-winning Razer Switchblade User Interface (SBUI), the latter of which provides users with one-click access to program tools, macros, key binds and other customizable functions, as well as full Internet capabilities independent of the main display. Features of the Razer SBUI include 10 dynamic adaptive tactile keys, a cell phone-grade LCD display that doubles as a track pad, and associated proprietary software.

“Today’s professionals demand the latest in power and performance, and they want it all on a beautiful screen that they’re able to take with them,” says Min-Liang Tan, Razer co-founder, CEO and creative director. “Our engineers packed the Blade Pro with the most advanced components available, and our software engineers designed some incredible proprietary apps to make gaming and creative work more efficient – and more fun – while staying firm to our commitment to true portability.”

The Razer Blade Pro is powered by the next-generation “Maxwell” architecture NVIDIA® GeForce® GTX 860M graphics processor for a boost in gaming performance. Video rendering, photo editing, electronic dance music mixing and performance, and other pro-level creative tasks also run faster than ever with the next-gen GPU. The Razer Blade Pro also features GeForce ShadowPlay and GameStream for seamless gaming video capture and streaming utilities, and GeForce Battery Boost, which works in conjunction with NVIDIA Optimus technology to provide up to double the battery life while gaming.

The Razer Blade Pro now features 16 GB of RAM, doubling-up on the previous iteration, a 4th generation Intel® Core™ i7 processor, and a groundbreaking solid-state storage solution to make the laptop faster and more powerful.

“Gamers and professionals see the value in a premium, portable 17-inch laptop, which is why we partnered with Razer earlier this decade to bring this project to life,” says Brian Choi, NVIDIA Sr. product manager. ”The Razer Blade Pro created an entirely new category of high-performance laptops capable of meeting the demanding needs of professional multimedia designers and hardcore gamers. This next generation of the Razer Blade Pro will be even more powerful, thanks to the new GeForce GTX 860M inside.”

At 0.88 inches thin and weighing 6.5 pounds, the Razer Blade Pro is among the most portable, high-performance 17-inch laptops ever brought to market. Every detail is sleek, slim and light, all the way down to the compact power supply, making the Razer Blade Pro the best choice for gaming performance and creative work on-the-go.

The Razer Blade Pro comes with Dolby® Digital Plus Home Theatre Edition, featuring immersive audio quality that is custom-tuned to deliver a cinematic sound experience. All of this is topped-off with gaming-grade peripherals built right in, including a fully programmable anti-ghosting keyboard with adjustable backlighting and an ultra-sensitive track pad, along with Razer Synapse 2.0, allowing for ultimately customizable settings and configuration storage in the cloud.

The Razer Blade Pro is now available for pre-order. For more information, go to www.razerzone.com/bladepro.