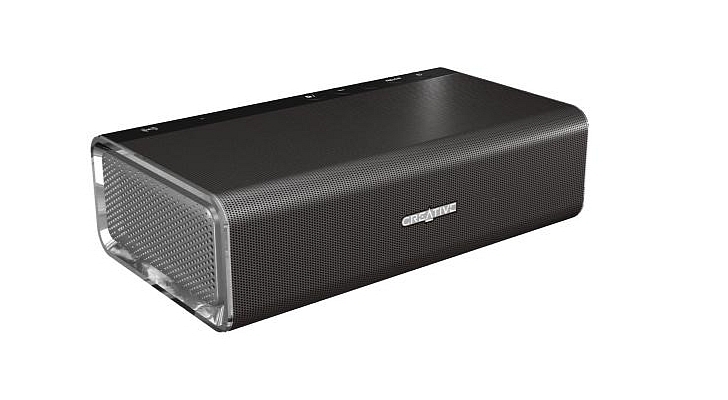 SINGAPORE – 3 March 2014 – The reception of the recently launched Creative Sound Blaster Roar at the IT Show 2014 in Singapore was nothing short of phenomenal.  The Sound Blaster® Roar, a new concept, 5-driver high performance portable wireless speaker blew away the huge audience that throng the recently-concluded IT Show 2014 with its amazingly powerful, precision-tuned, high fidelity sound from a compact and portable booklet size, and scored a very impressive average sale of more than one unit sold per minute during the show, literally flying off the shelves within the show’s opening hour each day, making it one of the hottest selling products at the show.  The IT Show is one of the largest annual consumer electronics shows in Singapore.

The Sound Blaster Roar was made available for sale for the first time after it sneak previewed at CES 2014 in Las Vegas in January 2014.  The sneak preview at CES generated similar overwhelming response from tech reviewers and general visitors alike.  Almost every one who saw the product demonstration at the Creative booth wanted one immediately.

“Most of the Bluetooth speakers of this size that I’ve heard really can’t hold a candle to it,”
– Influential Tech Editor focusing on premium audiophile products

“First and foremost, audio performance is exemplary of a speaker of its class and size, and easily rivals and even outclasses lesser 2.1 speaker systems…… the Sound Blaster Roar offered very good clarity, smooth mids and deep, well-controlled bass.  It also exhibited very good speed and dexterity…. it represents tremendous value for money and it is a no-brainer for us to recommend to anyone who is looking for a powerful portable wireless speaker.”  Source: HardwareZone.com, SPH Magazines, 2 March 2014

Designed to rival existing home stereo systems in sound quality yet light enough to be portable, the sleek metallic Sound Blaster Roar measures only 57 x 202 x 115 mm and weighs 1.1 kg.  Dubbed the ‘Audiophile Sound Booklet’ by audio aficionados, it is engineered from the ground up with Creative’s heritage in audio technology and years of research and expertise in speaker design, and represents the pinnacle of portable wireless audio.  Its superb audio performance is set to redefine the home stereo and wireless speaker market – by combining wireless connectivity, portability, high fidelity and audio power all into one compact unit that can rest on the palm, and be brought along on-the-go for a truly mobile digital lifestyle.

“First of all, I would like to say a big heartfelt thank you to all the visitors and well-wishers to our booth for their overwhelming support of the Sound Blaster Roar, especially to those who bought the product.  With limited publicity, the reception of such a new product has rarely been so astounding.  When the legendary Sound Blaster card was launched at Comdex in Las Vegas in Fall 1989, also with little publicity, one unit was sold every 4 minutes, and everyone was already completely blown-away.  In subsequent years, this spiraled to hundreds of millions of units sold.  Are we seeing a repeat of history here?  You decide.” Said Sim Wong Hoo, Chairman and CEO of Creative Technology.