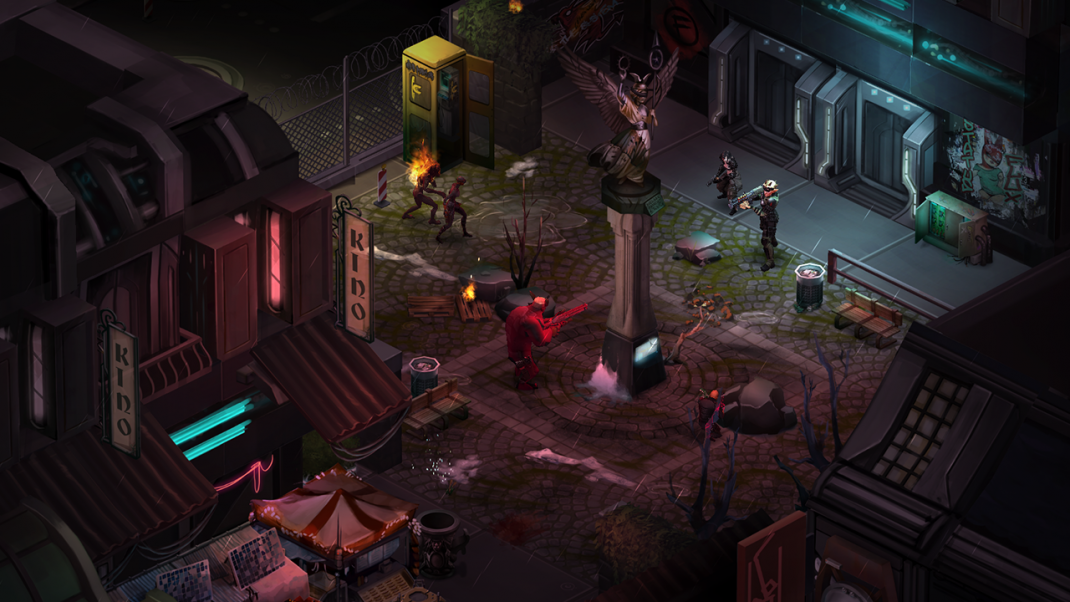 Kirkland, WA (February 27, 2014) Harebrained Schemes’ Shadowrun: Dragonfall, a major expansion for the magic-meets-cyberpunk tactical RPG mashup Shadowrun Returns, has launched today. Featuring a 12+ hour campaign set in the city of Berlin, Shadowrun: Dragonfall also contains a multitude of new features and enhancements for the core Shadowrun Returns game. The title is available for $14.99 (requires the original game to play) for Windows, OSX and Linux at the Steam store http://store.steampowered.com/app/272030, and a DRM-free version is offered at GOG.com. The original Shadowrun Returns game is also on sale for $14.99 for a limited time.

“The response to Shadowrun Returns was so overwhelming that it inspired us to pull out all the stops in creating Shadowrun: Dragonfall. We really did our best to listen to fans and act on their feedback,” said Jordan Weisman, founder of Harebrained Schemes and creator of the Shadowrun game universe. “We are thrilled to unveil our next story and can’t wait to see all the awesome new Shadowrun stories that the community will create with the Dragonfall expansion and the Shadowrun Editor.”

In addition to the incredible support they gave the project, from its announcement through its historic milestone as the first $1m+ Kickstarted videogame to ship, fans have shared hundreds of free Shadowrun adventures and content with the Steam Workshop community (http://steamcommunity.com/workshop/browse?appid=234650), greatly expanding the game world developed by Harebrained Schemes.

Shadowrun Returns debuted in 2013 to much acclaim. The game won numerous “Best of 2013” awards including four from Diehard GameFAN (2013 Game of the Year, Best PC Exclusive Game, Best Digital/Downloadable Game and Best Strategy Role Playing Game) as well as a Top Game of the Year Award from Gamasutra, and it appeared as a recommended game in Holiday Gift Guides from IGN and Board Game Geek.

In 2012, magic returned to our world, awakening powerful creatures of myth and legend. Among these was the great dragon Feuerschwinge, who emerged without warning from the mountains of Germany – unleashing fire, death, and untold destruction across the countryside. It took German forces nearly four months to finally shoot her down. This event became known as the Dragonfall.

Now, 42 years later, the world has changed. Unchecked advances in technology have blurred the line between man and machine. Elves and trolls walk among us, ruthless corporations bleed the world dry, and Feuerschwinge’s reign of terror is a distant memory. Germany is splintered – in Berlin, a stable anarchy rules the city. Known as the Flux State, it’s a place where almost anything goes, power is ephemeral, and the right connections can be the difference between success and starvation. For you and your team of battle-scarred shadowrunners, there’s no better place to earn a quick payday.

But a new threat is rising, one that could mean untold chaos and devastation. One that soon has you and your team caught on the wrong side of a deadly conspiracy. The only clue: whispers of the Dragonfall. Rumors that the Great Dragon Feuerschwinge may still be alive, waiting for the right moment to return…