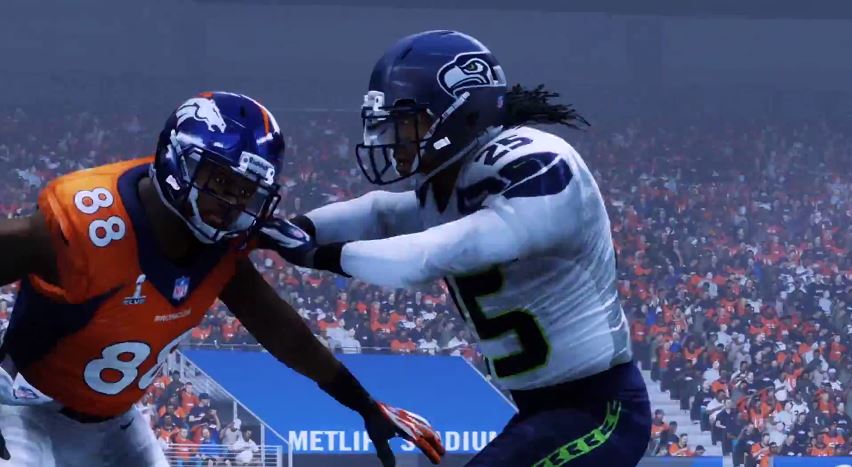 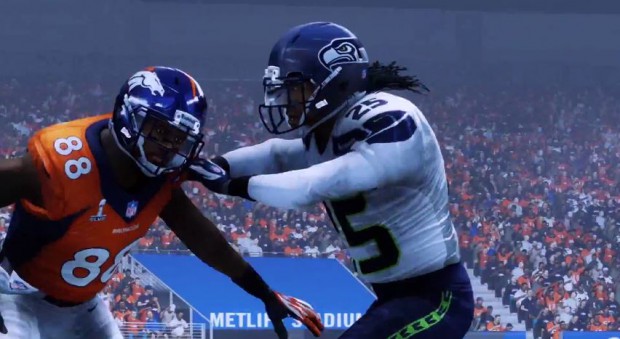 REDWOOD CITY, Calif. – Jan. 27, 2014 – The Electronic Arts Inc. (NASDAQ: EA) Madden NFL 25 Super Bowl Prediction is calling for Peyton Manning to be the first ever quarterback to lead two different franchises to Super Bowl victories, with the Broncos defeating the Seahawks 31-28 in overtime. A video of the matchup can be found here. The Madden NFL Super Bowl prediction has correctly forecast 8 of the past 10 Lombardi Trophy winners, and last year accurately called Baltimore’s large lead and San Francisco’s furious comeback with the Ravens hanging on for the win.

The defenses of both the Broncos and Seahawks asserted themselves early, as the offenses struggled to score points. Richard Sherman further bolstered his case as the best cornerback in the game, returning an interception for a touchdown just before the half and sending the Seahawks to the locker room with the momentum and a 10-7 lead.

The Denver offense shook off the cold New Jersey air and got hot in the second half, with Peyton Manning attacking Richard Sherman and connecting with Demaryius Thomas for a 17-yard TD in the 3rd quarter. Later in the quarter Knowshon Moreno added a goal line run to give Denver a 21-10 lead. Even though Steven Hauschka managed a field goal as the period ended, the pendulum had clearly swung in the Broncos’ direction.

Manning added a 24-yard touchdown to Wes Welker early in the 4th quarter, and Denver appeared ready to roll to their first Super Bowl victory since 1998. Russell Wilson and the Seahawks weren’t willing to crown the Broncos just yet, as a touchdown pass from Wilson to Golden Tate and a last-second 27-yard touchdown run by Marshawn Lynch pulled the Seahawks to within two points, and the successful conversion knotted things up to send the contest to overtime.

Denver’s defense, shell-shocked from their 4th quarter collapse and Lynch’s bruising TD run, steeled their resolve and stopped the Seahawks on the first overtime possession, forcing a punt. The Broncos managed to advance the ball to the Seahawks’ 30-yard line, but their drive stalled there and John Fox called in the kicking unit. Matt Prater, the record-holder for the longest ever field goal in an NFL game, stepped in for his first attempt of the game and drilled a 48-yarder to seal the victory and send Broncos fans around the world out of their seats with elation.

In addition to winning his second Super Bowl ring Peyton Manning also earned MVP honors on the strength of his 322-yard, three touchdown performance. Demaryius Thomas also had a monster game, hauling in 11 passes for 168 yards and a touchdown. The Seahawks’ Marshawn Lynch was the game’s top rusher, gashing the Denver defense for 109 yards and a touchdown.