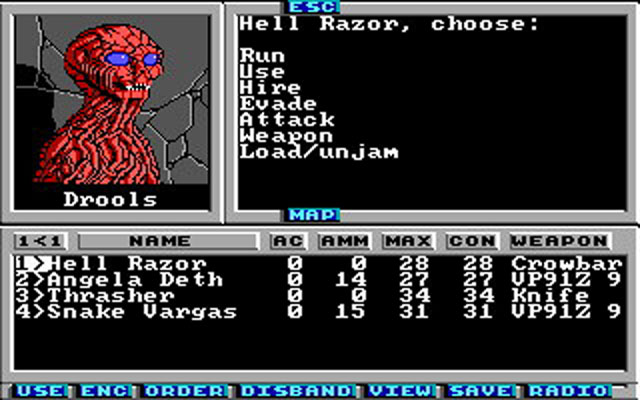 The Original Wasteland Now on Steam (Newport Beach, CA) November 12, 2013 InXile Entertainment is proud to bring back the classic cRPG Wasteland. This critically acclaimed post-apocalyptic role-playing game, was first published in 1988. The game broke new ground as one of the first cRPGs that gave the player an open, reactive world with persistent consequences.

Welcome to The Wasteland. The year is 2087, eighty-nine years after an all-out nuclear war transformed the Earth into a hellish landscape where survival is a daily struggle against thirst, hunger, radiation, raiders and mutants. The player takes control of a band of Rangers, sent out to investigate a series of disturbances in The Wasteland, only to soon uncover a vast threat to all that remains of mankind.

This old school cRPG offers turn-based combat and top-down exploration, as well as mood-setting texts and a colorful variety of enemy portraits. Furthermore, inXile has enhanced the rerelease. First and foremost, the updated game will run on modern machines and at higher resolutions. Additionally, the game has expanded save game functionality over the original. Furthermore, the game has been expanded with a music track from Wasteland 2 composer Mark Morgan and now integrates texts from the original paragraph book and manual into the game., Finally, the game offers many optional overhauls such as uprezzed portraits, paragraph voice-over and a choice of playing the game upscaled and smoothed or in the original resolution.

“Fans have been contacting me asking for the Wasteland 1’s return for many years now,” says Brian Fargo, inXile CEO. “It is great to get this title out there again, not just for existing fans to relive the experience, but also for a new crowd of people who did not get the chance to play it the first time around.”

Wasteland 1 – The Original Classic went live for Wasteland 2 Kickstarter backers on Friday, and has already been downloaded over 33,000 times. As of this writing Wasteland 1 sits as the second-highest rated game on GOG.com.

Wasteland 1 – The Original Classic for Mac and Windows PCs is now available for purchase on Steam and GOG.com for $5.99.