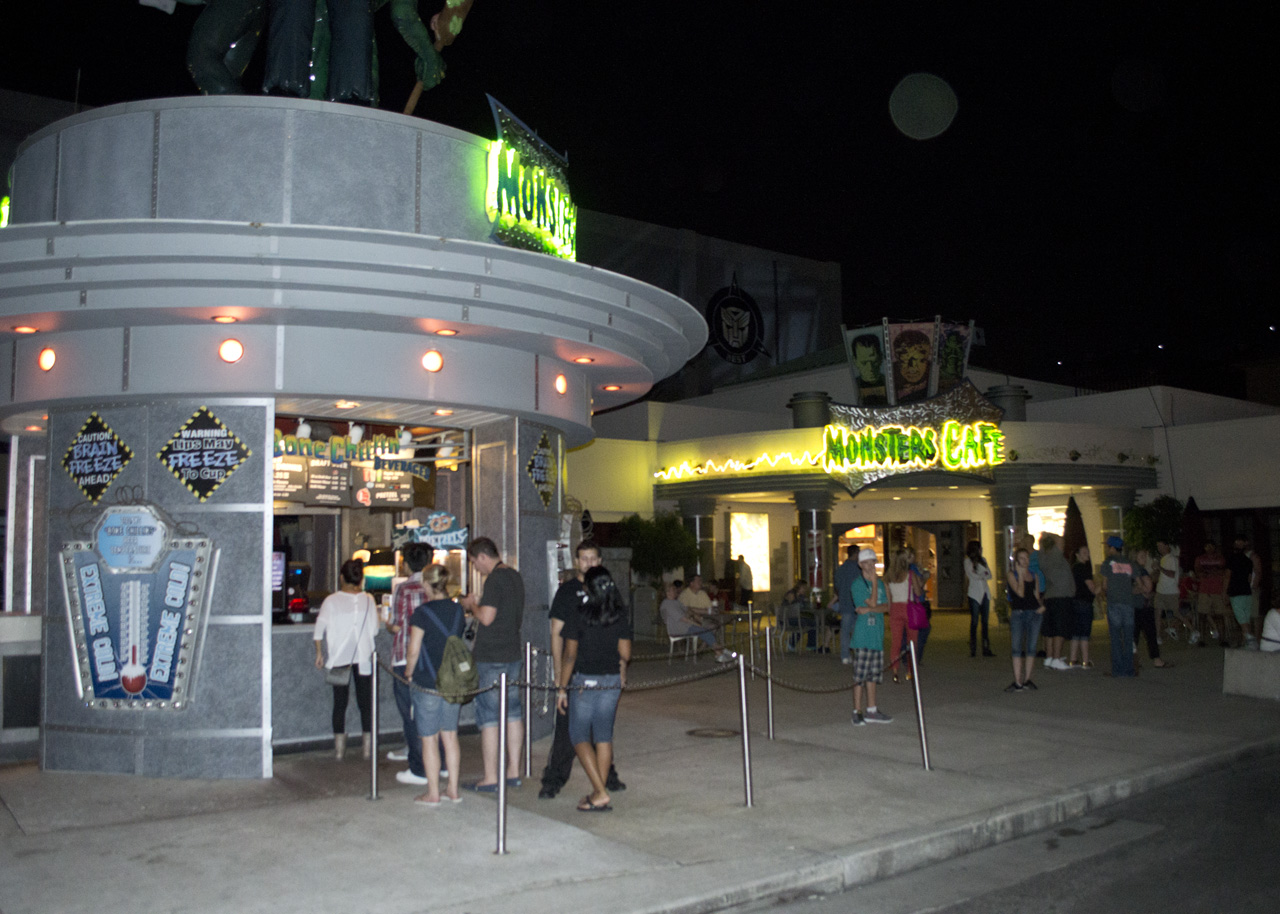 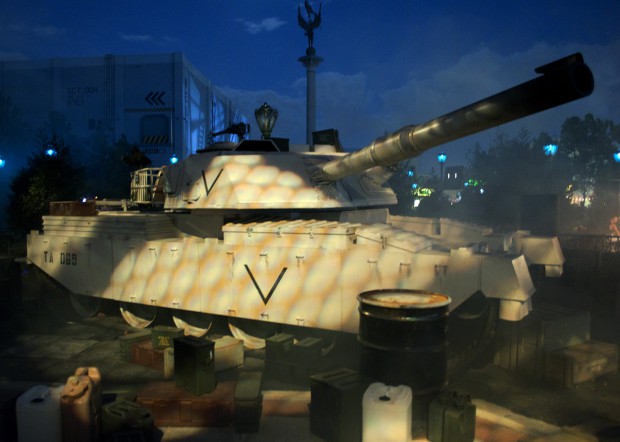 Unlike other theme park haunted attractions, which separate their monster talent into various “scare zones”, the overall theme throughout Halloween Horror Nights Orlango was from AMC’s The Walking Dead. Along the walk around the park, we would discover various scenes of zombie apocalypse destruction taken from various TV show locales. These locations range from military operations on the streets of Atlanta to a burning farmhouse and you may even find the Winnebago somewhere out there. My favorite random find of the night was that of a doctor doing triage and emergency first aid on a mannequin dressed up to look horribly-injured in the Atlanta recreation. Another cool event that randomly takes place is when an unmarked truck pulls up and unloads a bunch of The Governor’s men who send a large number of zombies into the crowd – such a cool moment!

Out here on the West Coast, we haunt-goers generally call the haunted houses located in a haunted attraction a “maze”. Apparently, on the East Coast, these are still called “houses” and HHN Orlando uses this nomenclature. The first haunted house we visited on our trip was Cabin in the Woods. BIG mistake. The problem is that this haunted house is so good, it made almost all the other ones pale in comparison. The overall set design and incorporation of various elements from the Whedon/Goddard film into the house were phenomenal and the talent was simply a force to be reckoned with. I especially-liked getting to walk through the elevator room as well as seeing a few references to “Kevin” painted about. 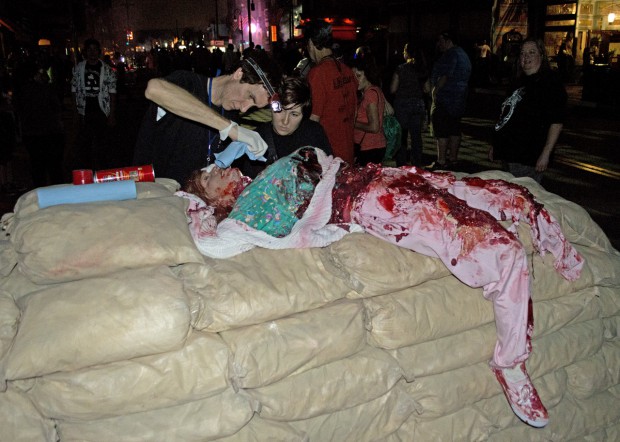 The second haunted house we visited was An American Werewolf in London. This would turn out to be another huge mistake as this experience was just as good as Cabin in the Woods. I am a big fan of the John Landis film and the maze faithfully recreated the film from start to finish while also adapting it to haunted house form. The large, wolf puppets looked like they were taken directly from Rick Baker’s warehouse, and the Nazi monsters were truly frightening with their intensity. This haunted house did such a good job, it made me nostalgic for the film, so I am going to make sure I screen it again for Halloween.

When I heard that Halloween Horror Nights Orlando would have a haunted house based on Capcom’s seminal video game classic, Resident Evil, I was thrilled. This haunted house starts guests off in the streets of Raccoon City at the opening scene of Resident Evil 2. While there were a few of these awesome moments scattered through the house, I was surprised by just how short the maze is. Also, there were several scenes taken from the experience of video gaming, such as a room with a large neon “Paused” sign, that I just didn’t need. I wanted to experience being in the game, not playing the game. Additionally, the actors playing the “Nemesis” characters were not nearly tall or big enough to be physically threatening – they looked like they were swimming in the huge head masks. Finally, the length of this haunted house experience was far too short, with no big climax to speak of. It just sort of…  (editor’s note: See what I did there?)

HAVOC 2: Derailed is the sequel house to HAVOC, a 2008 haunted house which garnered much fan acclaim. I was told this story by Dustin from IsItOctoberYet (he is also an editor here at GamingShogun), who was one of my traveling companions that night. Apparently, the cast of the house were so committed the first time around that they all (including the females) shaved their heads to get into character as super-human, yet-crazed soldiers. This year was no different as the cast was all donning the “No-Guard Buzz Cut” again and, even when outside of their maze they would march in formation and scare on-the-move. This year’s HAVOC takes place mostly in a train car that was originally supposed to transport the soldiers. Unfortunately, the soldiers escaped and are at their intense scares once again. The train effects, like lighting simulating motion, are well done and I really enjoyed the firearms effects as well – something a lot of haunted houses don’t usually do. 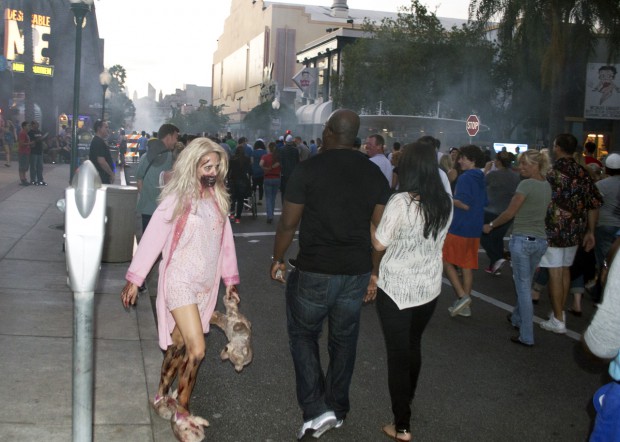 The Walking Dead house at the park was a lot of fun, with some great set design throughout. I actually preferred this version of the maze over that found at Universal Studios Hollywood. The Walking Dead takes guests through Season 3 of the AMC show backwards – from the arena set to the prison. Particularly, I enjoyed the prison room a lot more here as the talent were sync’d up to a light and sound cue that triggered their arrival and it was a straight shot out the exit of the house. At our maze at Universal Studios Hollywood, that room is mainly a queue area that gets backed up with people as the path wraps around it into a bottleneck.

After Life Death’s Vengeance was a total mess of a 3D haunted house with a bland storyline that didn’t transfer over to the actual house experience. The idea behind this haunted house is similar to that of the film “Shocker”: A convicted killer is put to death via the electric chair and comes back from the dead to stalk again. Unfortunately, many of the set pieces didn’t make sense or seem to have anything to do with the story setup outside the house’s facade. Additionally, the facade was graced with old-time jazz music and that didn’t get taken through the house at all. The whole experience felt rather disjointed and messy. Even worse wass that the 3D effects of the house were sometimes “muddled” when viewed with my 3D glasses, giving way to strange blurs and streaks. I checked and found my glasses were not dirty – I got them fresh at the start of the queue line.

Evil Dead was a big disappointment for me, having seen the West Coast version of the haunted house during our review of Halloween Horror Nights Hollywood. This iteration of the house plays more on the concepts of the film rather than the film’s plot. We knew there were to be problems right when stepping into the “sound stage” the house is housed in. They had a red-lit wall and a huge about of open, empty space approaching the curtained walls of the house. It was just a waste of an opportunity to get attendees into the mindset of the experience. I would rather have seen them line the path with thick trees and bushes to simulate walking deep into a lonely forest. Then there were several “meta” pieces such as huge pages of the film’s Necronomicon Ex-Mortis strewn about, which didn’t make much sense. They also used a projection effect in the cabin’s main room to depict the evil racing through the forest that just didn’t work for me. Finally, the house’s climax was very weak, not doing all that great of a job of depicting the blood rain and battle with demon Mia. Despite these negatives, I was pleased with some of the things that the house had to offer – such as actually having an actor peering up at us from the chained basement hatch on the floor of the cabin (the Hollywood version had a mannequin). Also, the house designers threw in some little touches that could have been missed, such as the make-shift defibrillator unit sitting on the porch. 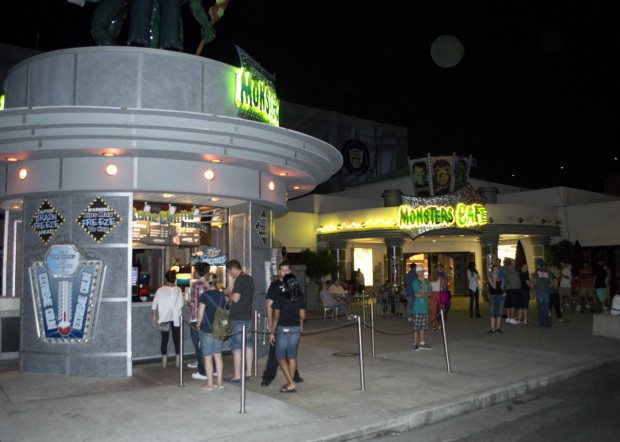 The Rocky Horror Picture Show Tribute stage show was a great deal of fun – especially for the audience members who knew all the live show callbacks. This stage show runs about thirty minutes in length and is, basically, a cut-down version of the movie adaption of the musical, focusing on its high points. Be prepared for some of the live show gaffs however, like getting sprayed with a bit of water during “Over at the Frankenstein Place”. The actors/singers all had great stage presence as well as vocal quality, and embodied their characters well despite the short run-time of the show. A special shout-out has to be given to the actor playing the character of “Riff-Raff” – that guy can seriously sing!

Aside from a few “so-so” haunted houses in the park, there were a couple other issues we ran into during our visit. The first issue was that, while signs outside all of the haunted houses clearly state “No Flash Photography or Video”, maze attendants continually asked us not to take any non-flash photos either. This led to a couple arguments as we were attempting to follow their posted rules in getting our coverage of the event. I don’t know why Universal Studios Orlando just doesn’t put “All Photographs and Videos Prohibited” on their signs, which would clear everything up, but I digress.

The next issue came about during our meal at the Universal Classic Monsters Cafe. The four of us were having a very tasty meal, my own consisting of a hearty portion of lasagna, when the person across from me gave a cold stare right through me. I had seen that look before on her face before as she is has a severe phobia of cockroaches and, yes, there was a very large specimen crawling on the curtain behind me. She bolted up and started to make for the nearest member of the janitorial staff. The rest of us moved our stuff over to another table. As she explains it, the staff member she spoke to didn’t seem all that concerned and basically went over to the reported location of the offensive insect and moved on after the little bugger had run off. Obviously, theme parks are going to get roaches and, again, the quality of the food was very good – I finished my meal without hesitation. It was just a bit of real terror for one of our group member’s that I needed to report on.

Overall, Universal Studios Orlando’s Halloween Horror Nights has a lot going for it with energetic monster talent, good outdoor set pieces, and a few killer haunted houses and shows. I would advise guests to hit the Cabin in the Woods and An American Werewolf in London houses before the lines get too long (or just buy a front-of-the-line pass for an upcharge – it will be worth it). If the park only consisted of the outdoor scare area and those two houses, I would rate it an easy 5 out of 5. However, there are a couple duds to be found in the bunch and they downgrade the score a bit to a 4 out of 5. 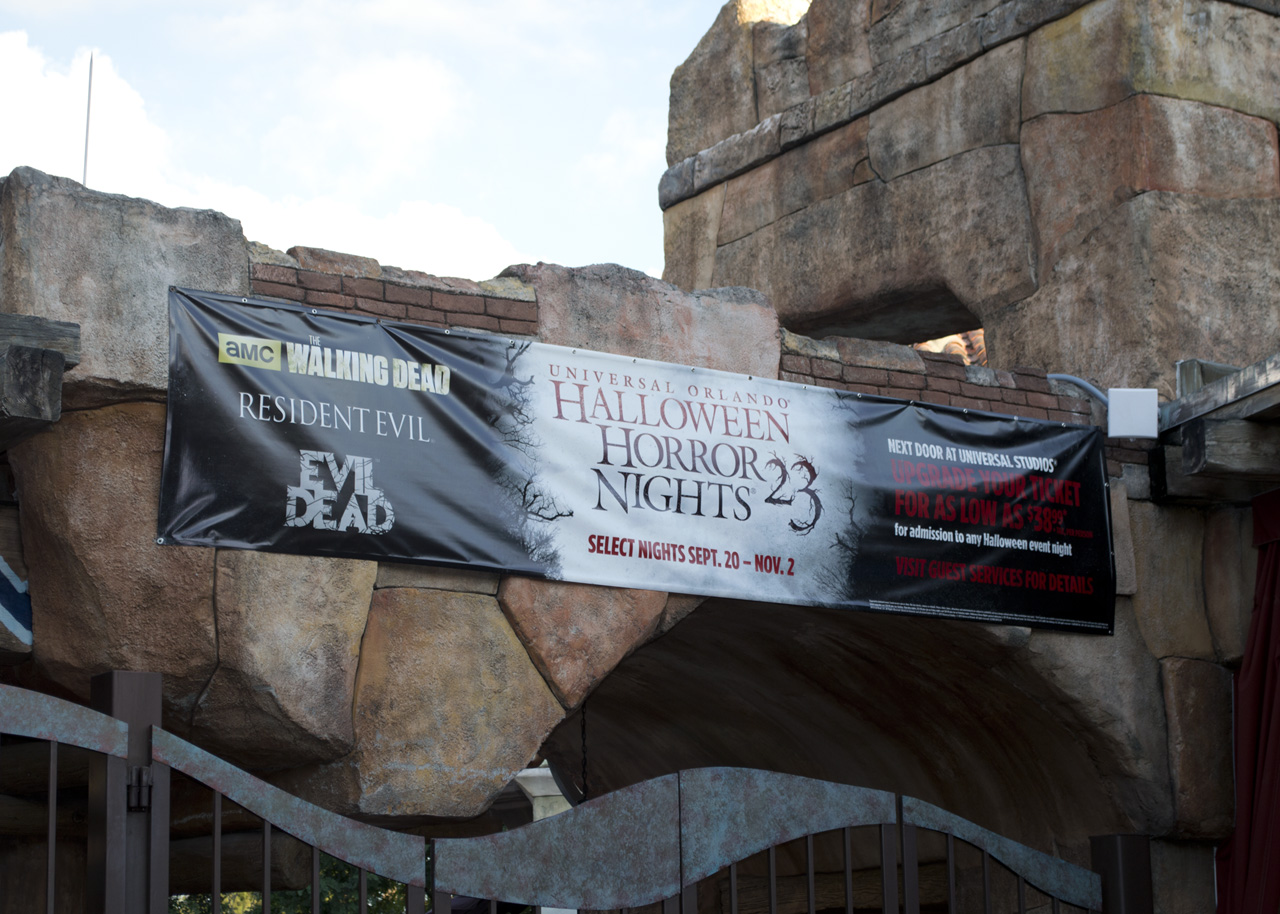 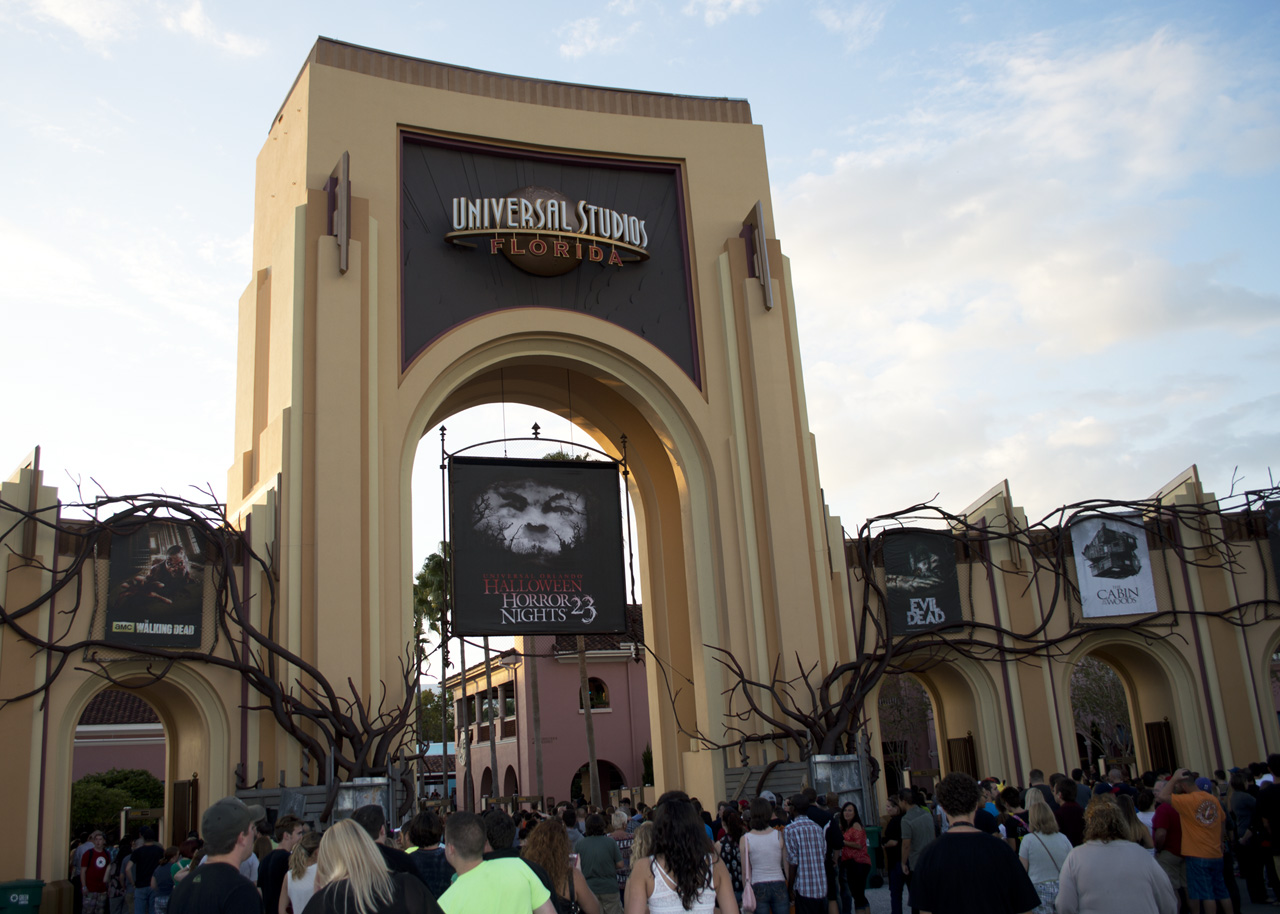 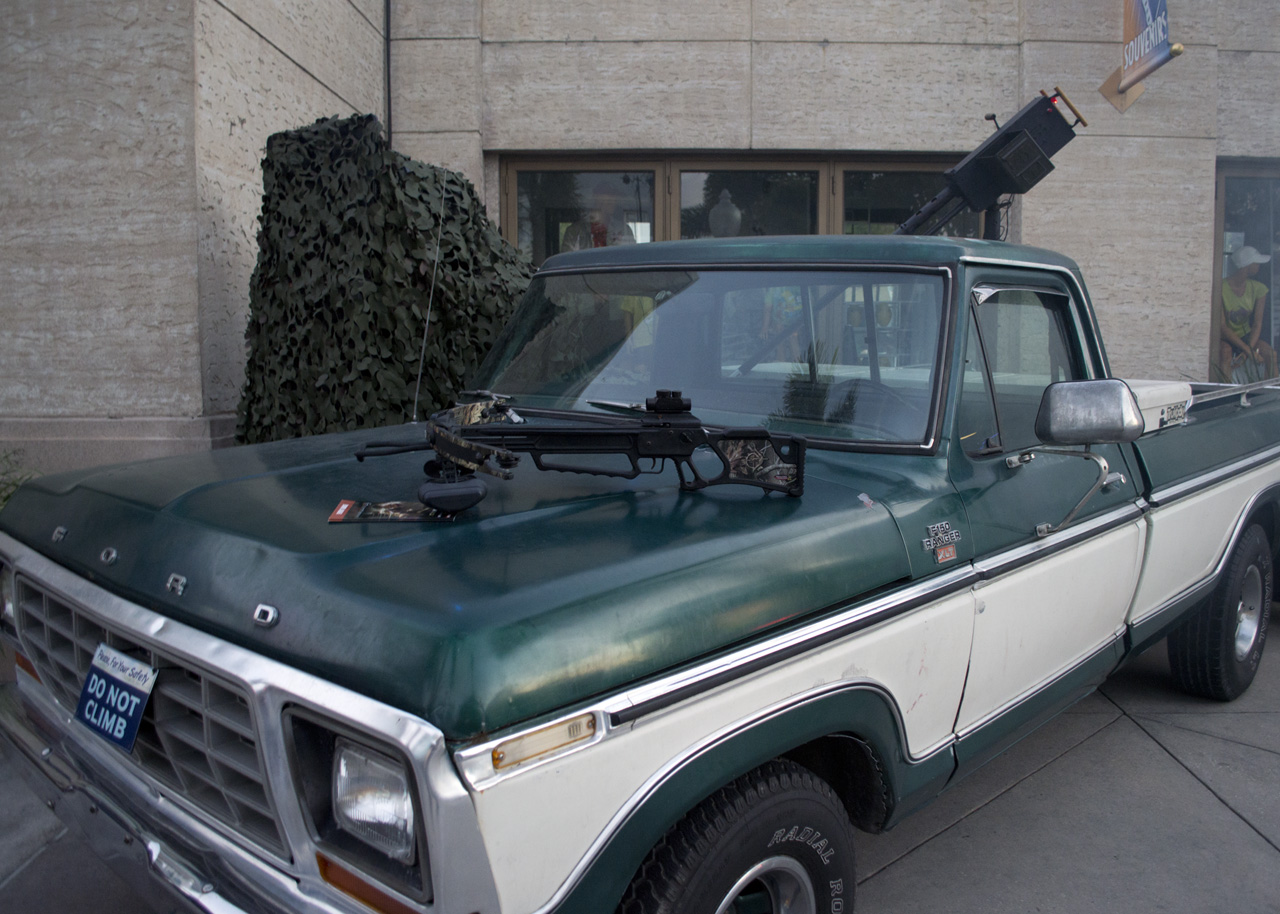 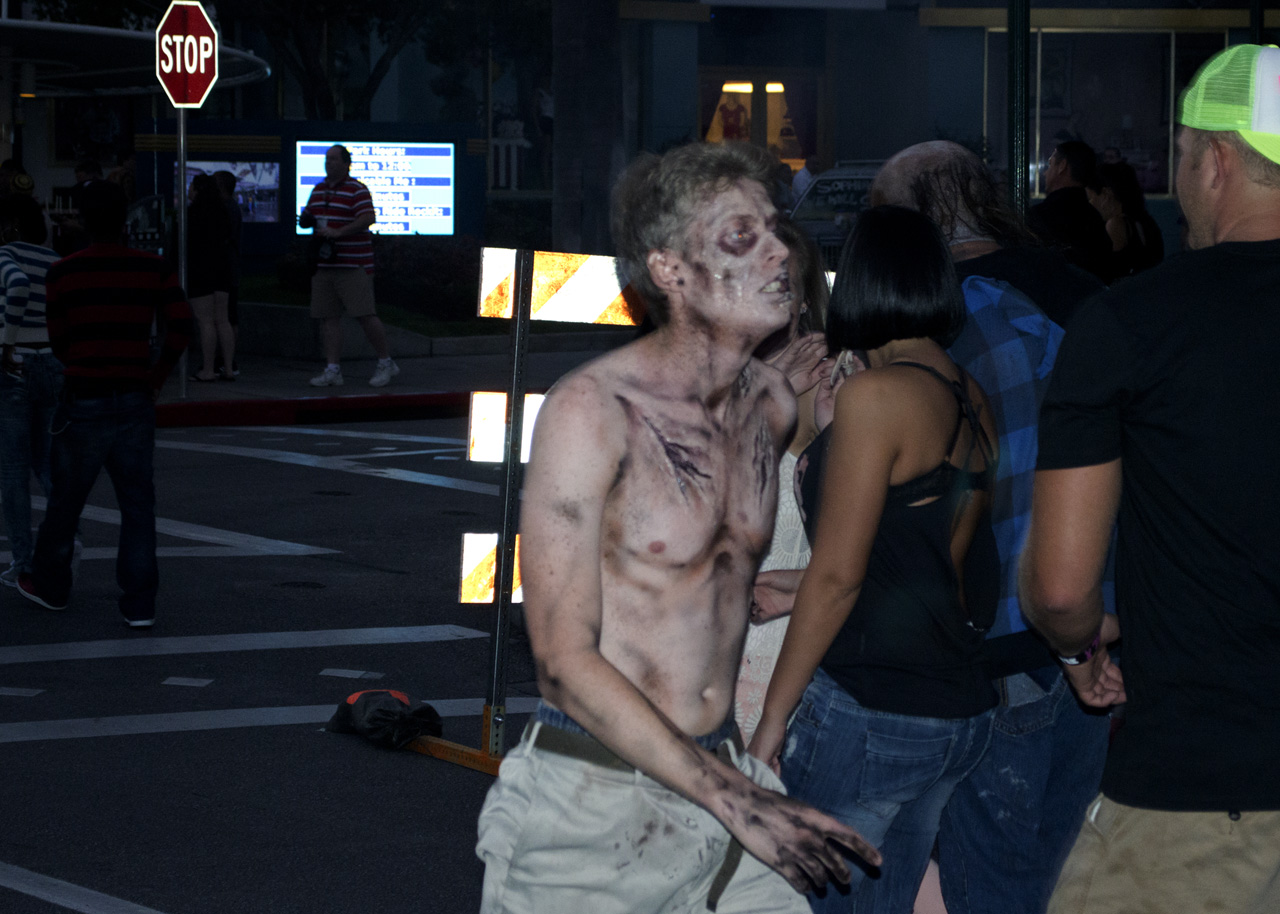 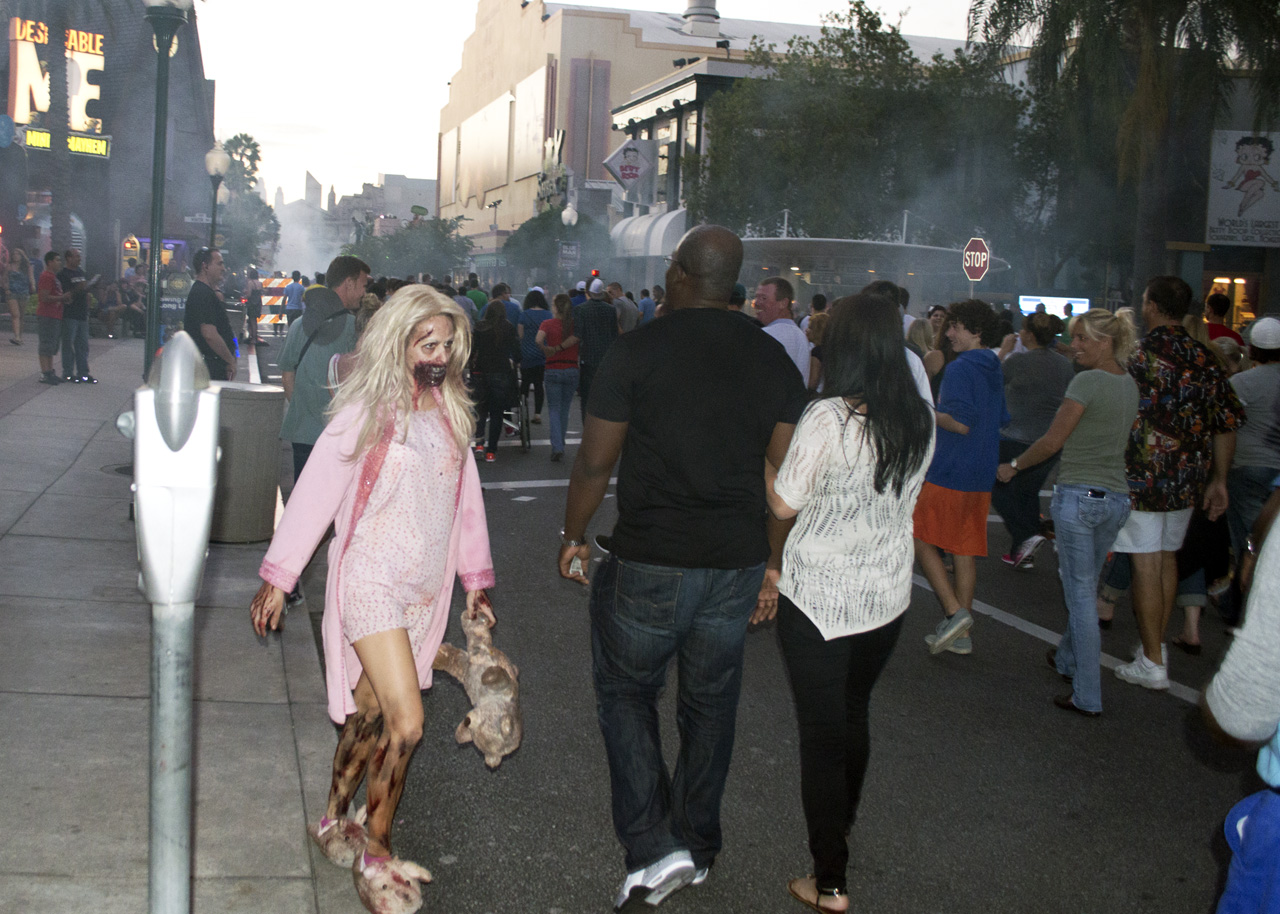 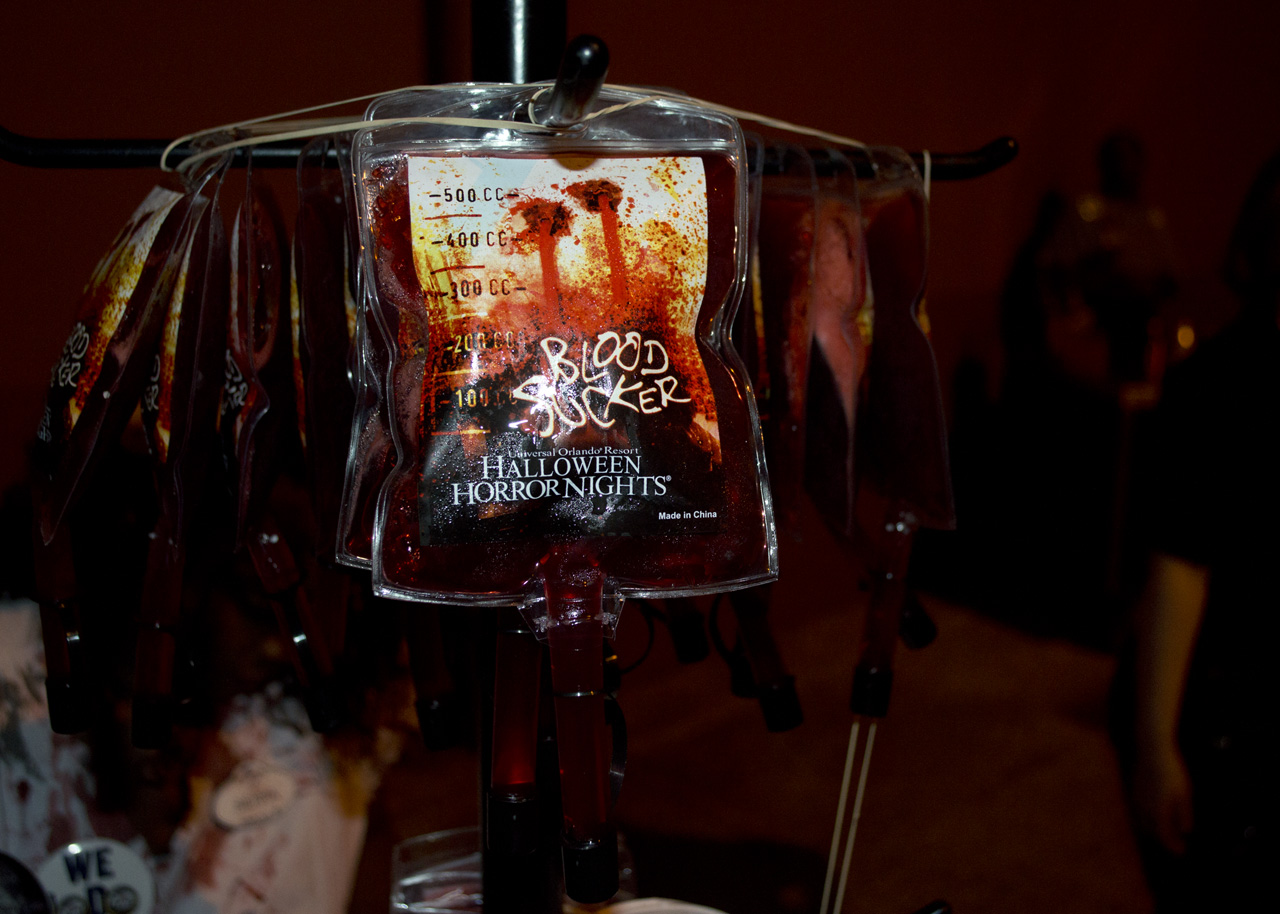 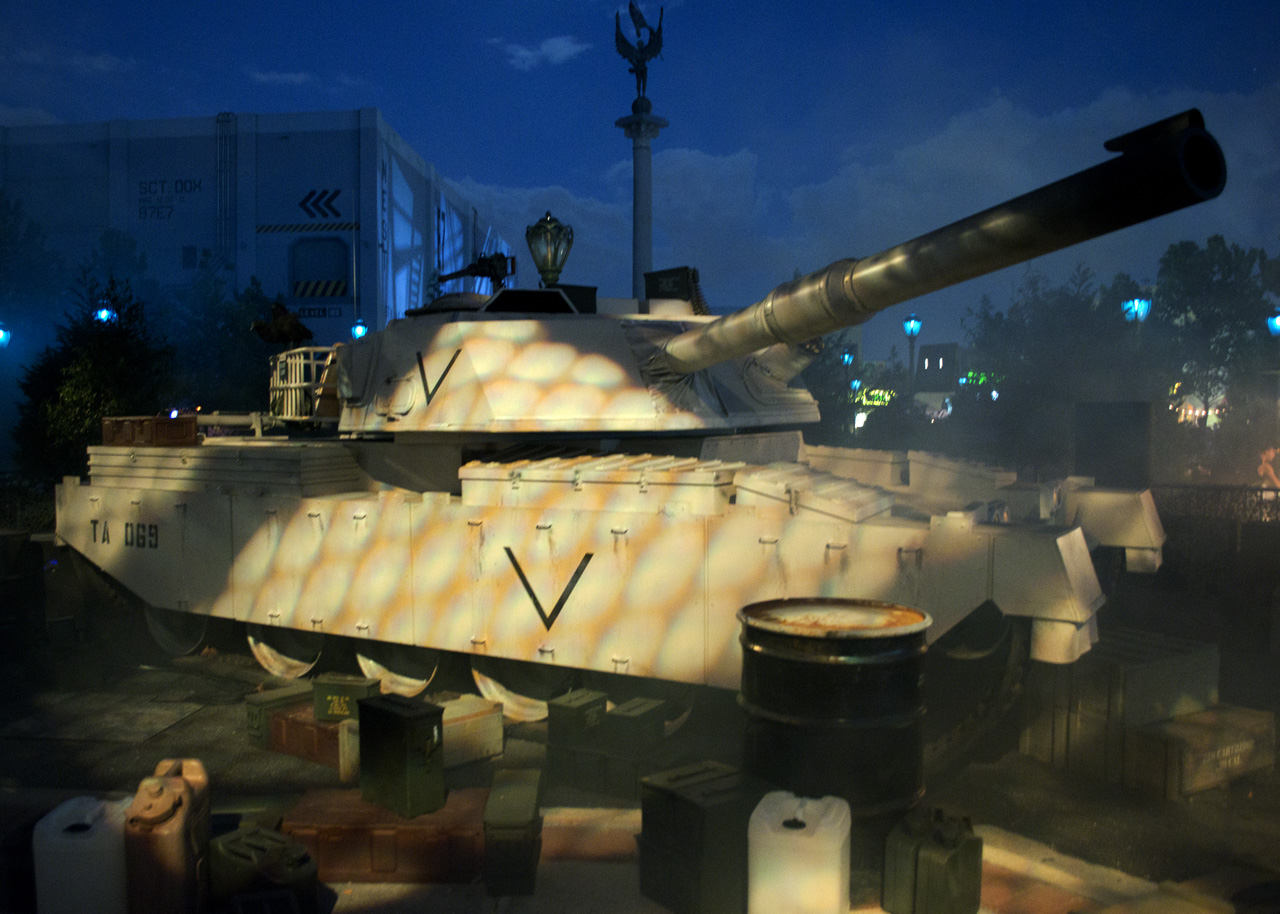 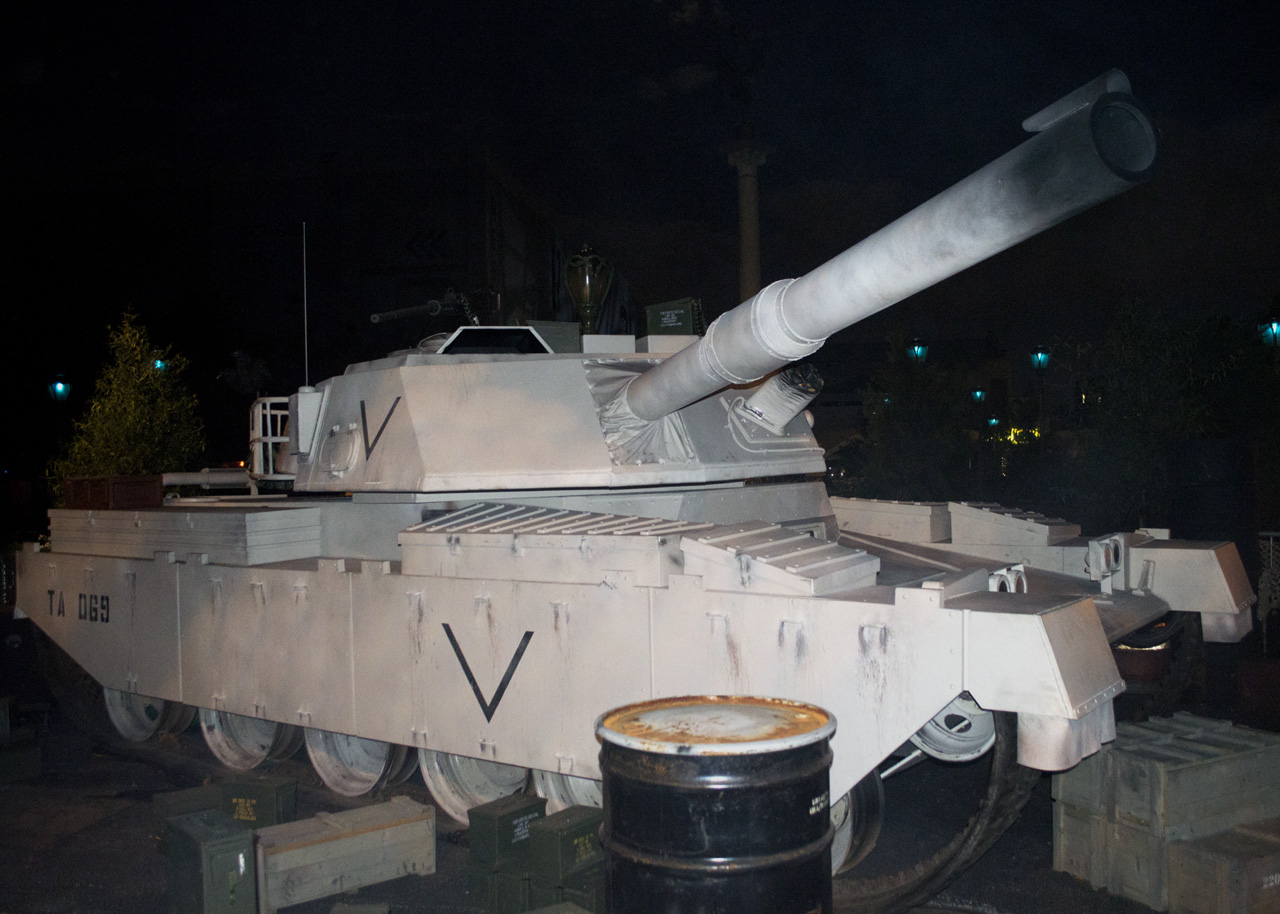 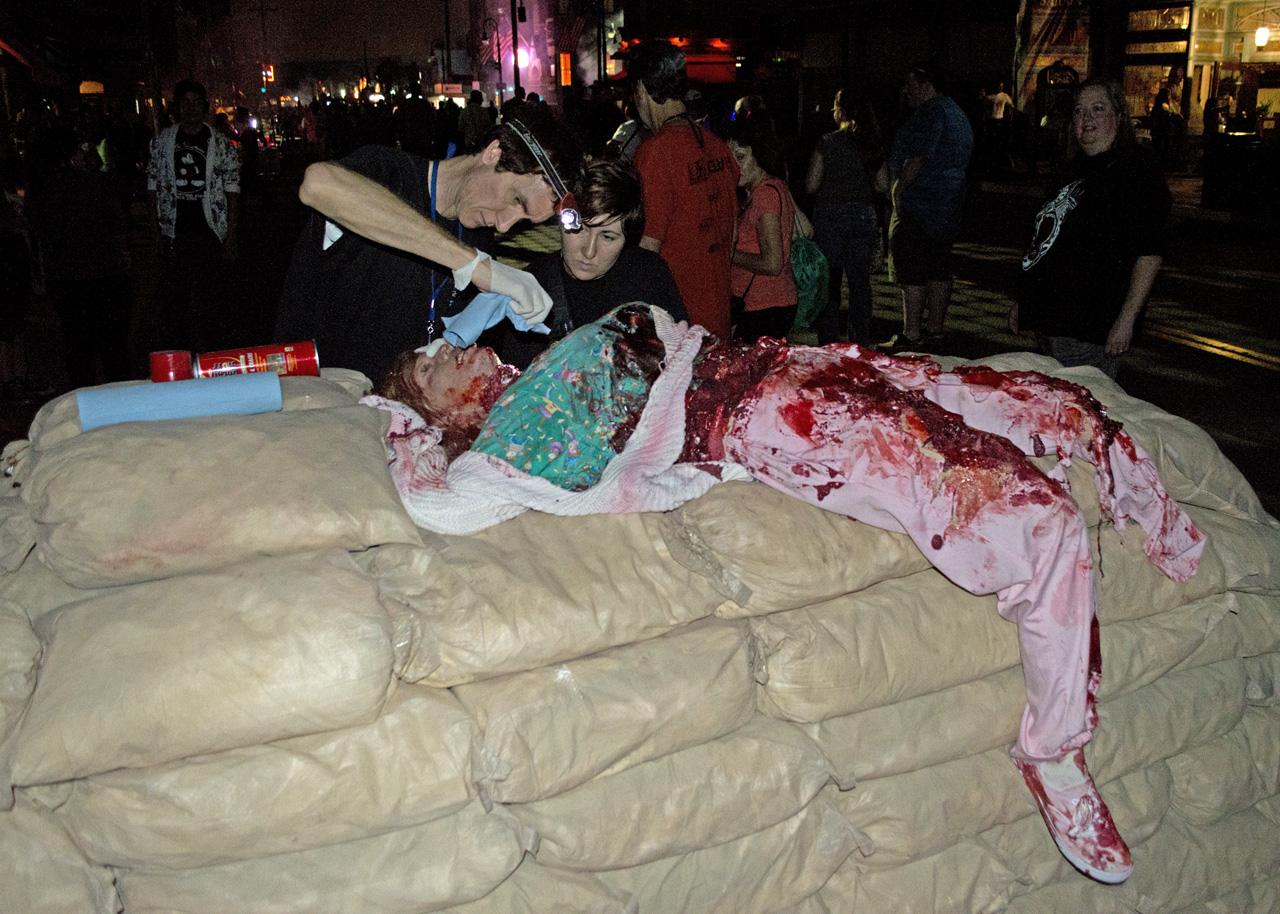 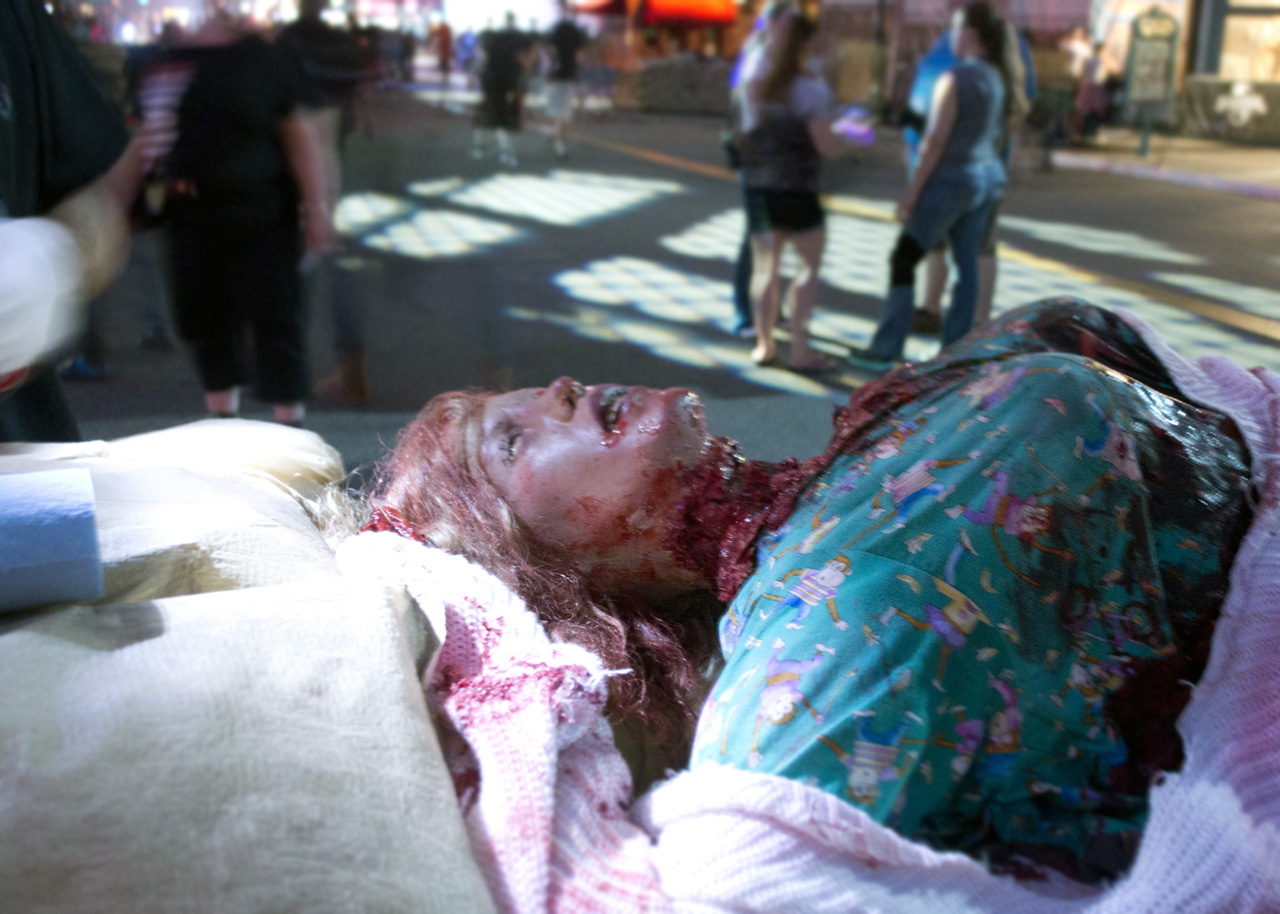 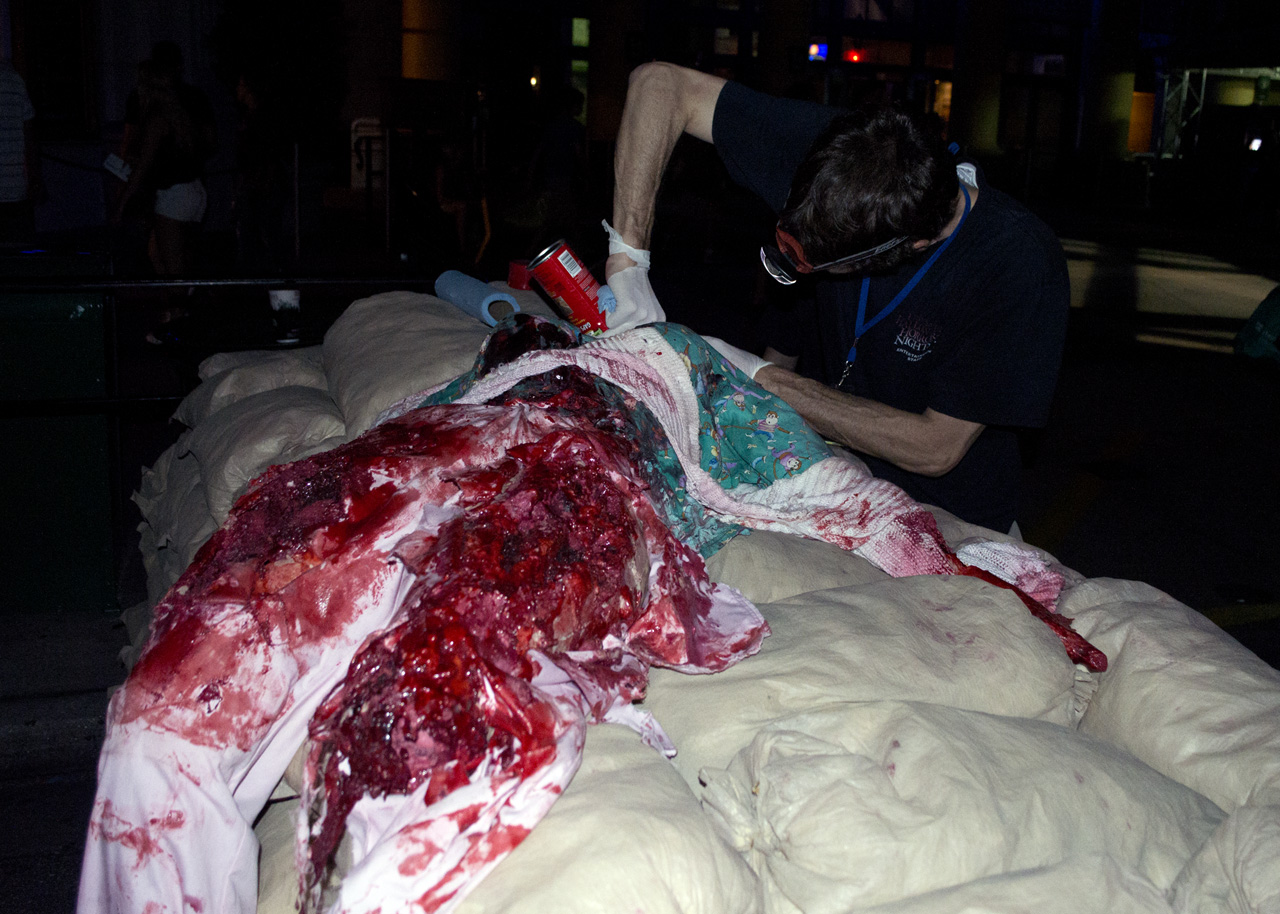 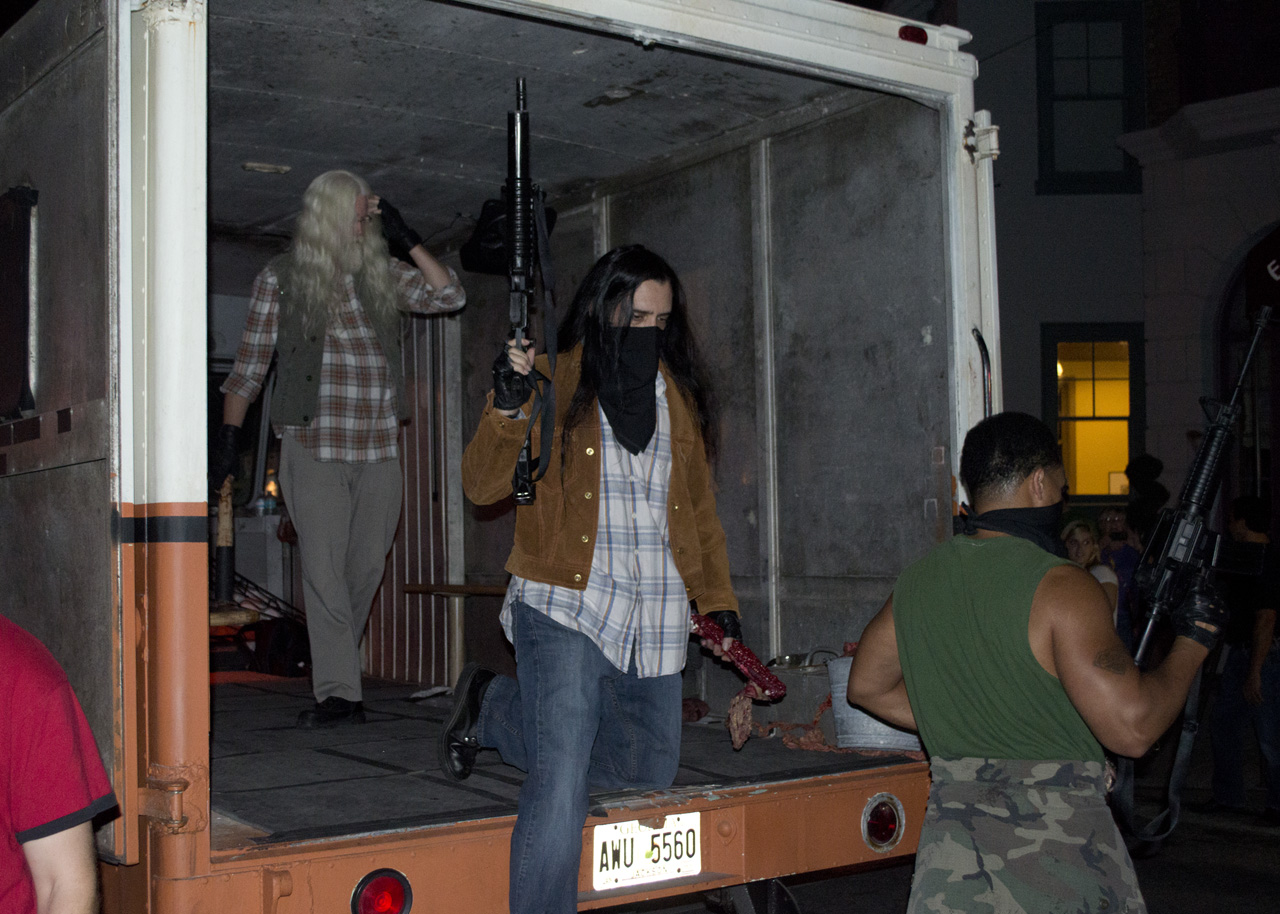 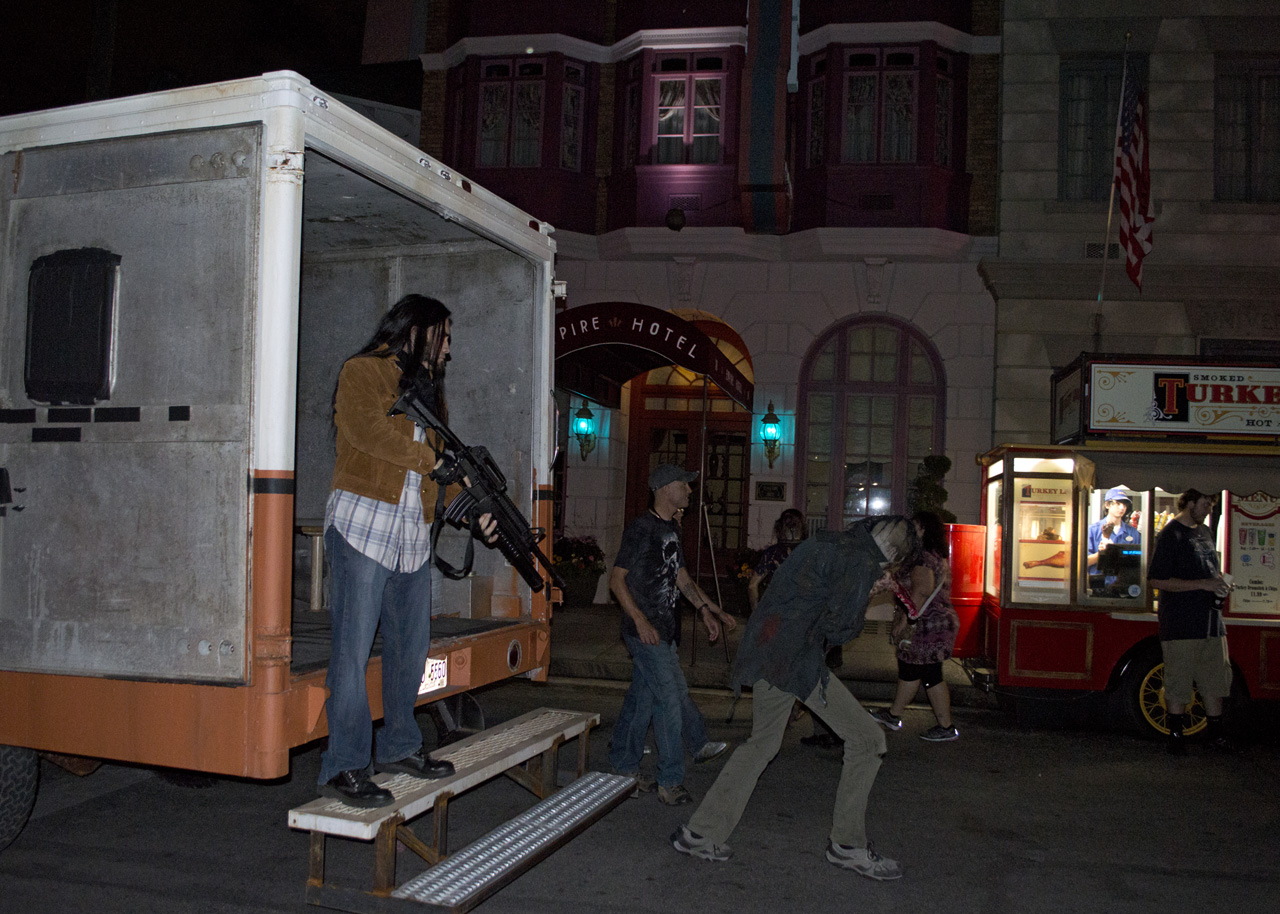 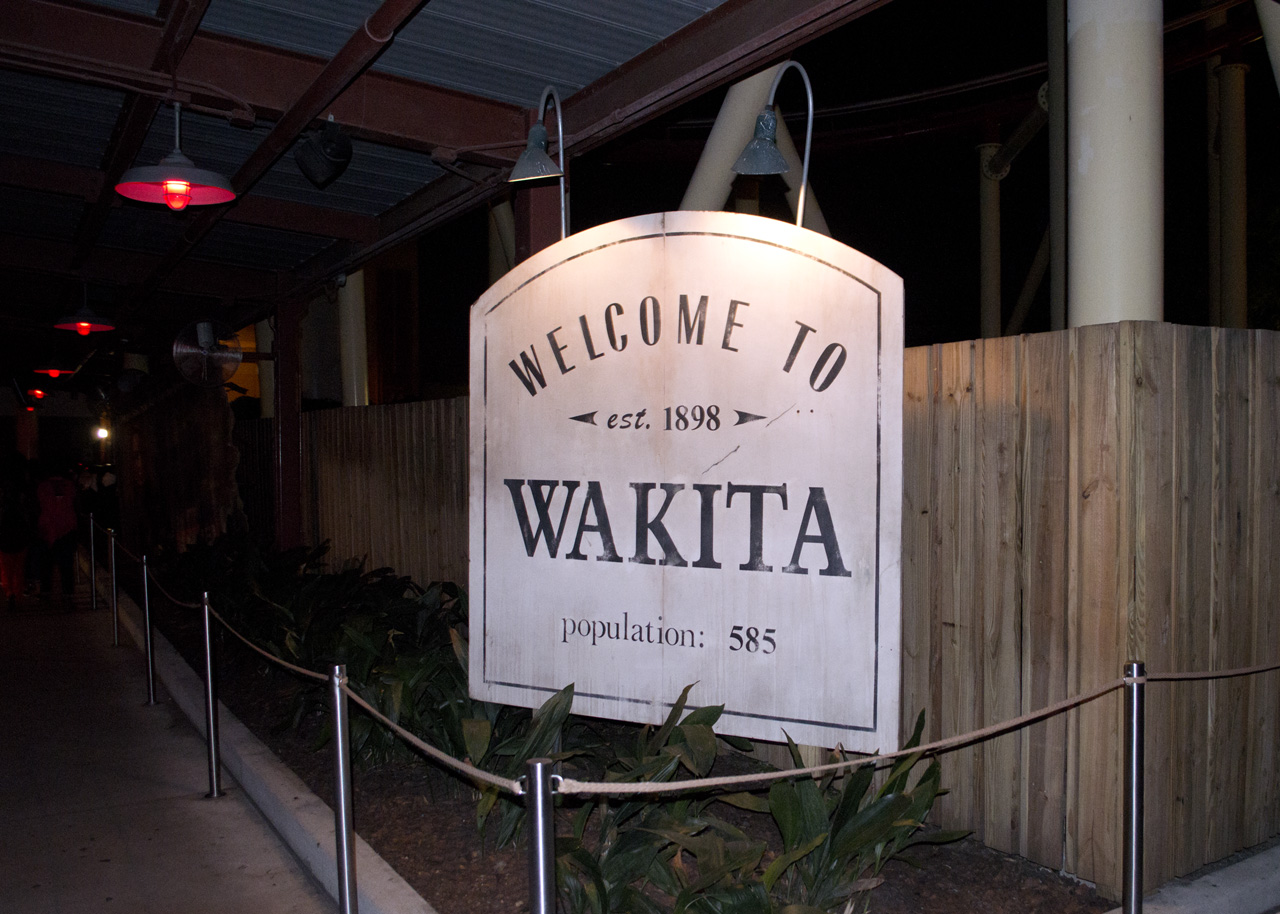 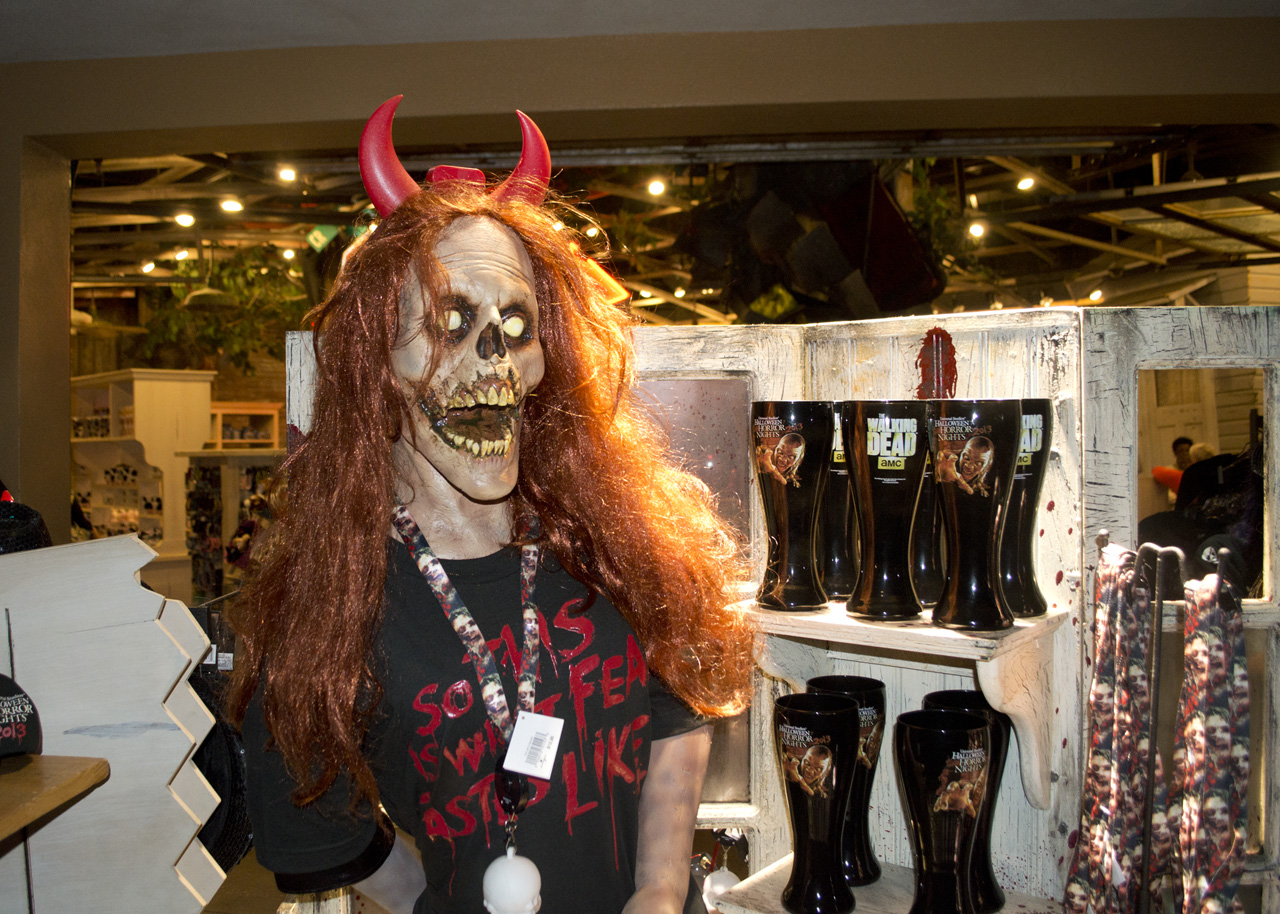 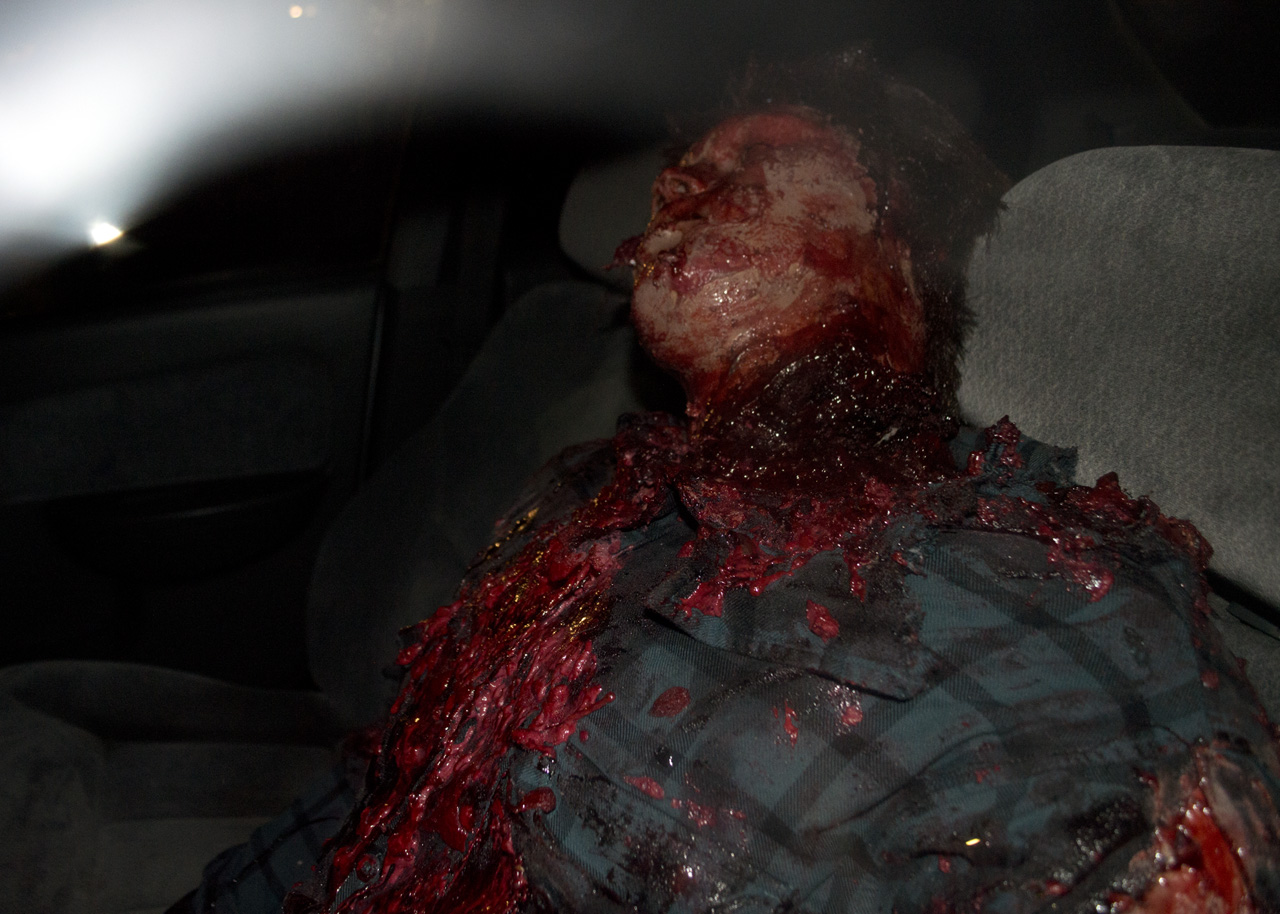