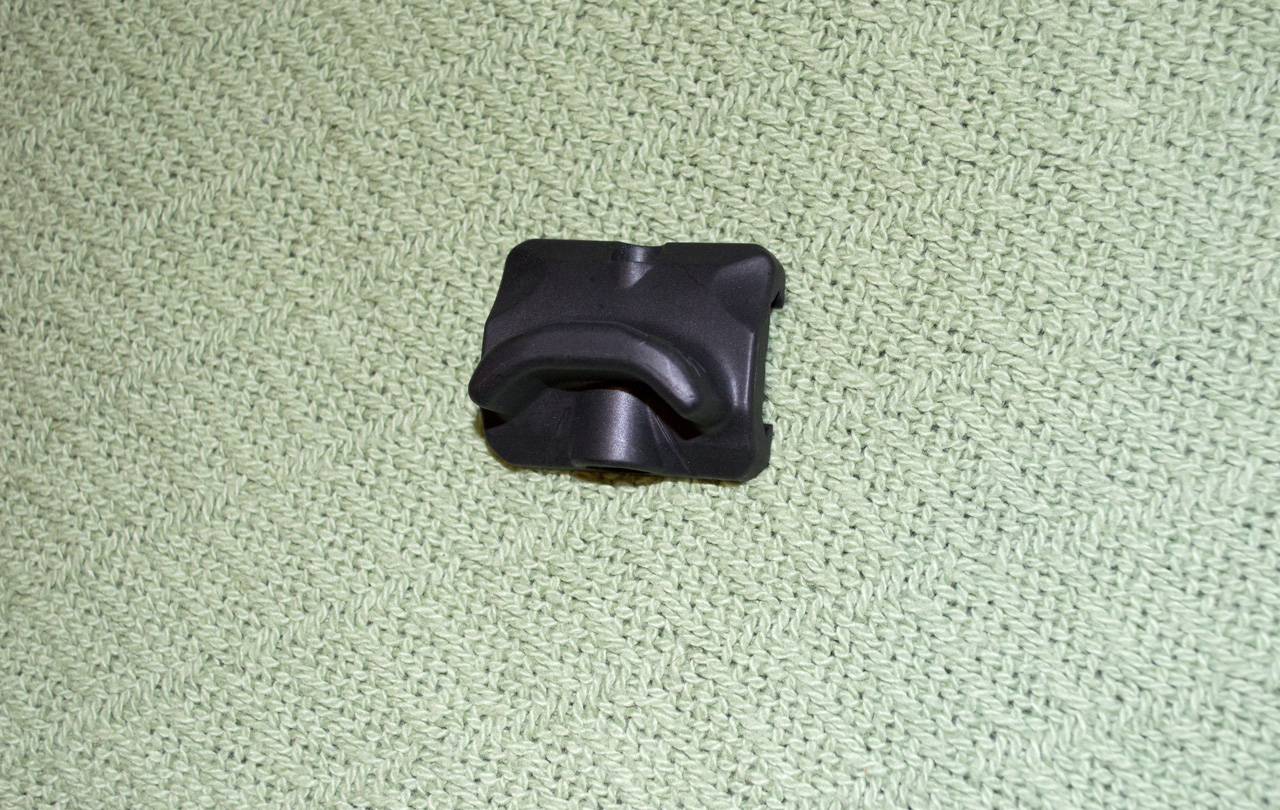 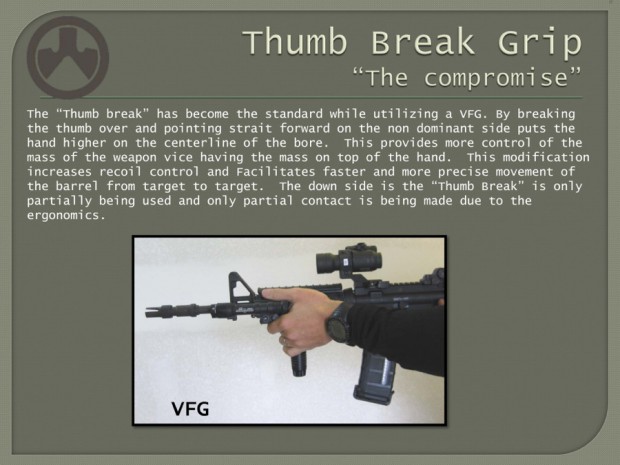 There are several schools of thought on how one should hold his or her carbine with their non-dominant hand. The idea behind these methodologies is to get the most control out of your weapon while firing. In real steel firearms, this is very important as the recoil of an actual firearm throws off one’s aim quite readily unless the shooter is prepared to compensate. In airsoft weapons, recoil is not really a factor. However, these same principles can be applied in order to increase all-around shooting stability. In addition, there are some recoil systems out there for airsoft guns that can, while not as much as a real-steel weapon, throw the shooter’s aim off. In these instances, one of these real-world shooting methodologies is strongly encouraged.

The rise of the vertical fore-grip in airsoft has brought about a whole new generation of “tacticool” players who have them attached to their airsoft guns. The problem with this trend is that they are, most of the time, using them improperly. Gripping the fore-grip in a tennis racket style puts the hand underneath the bore and is unstable.

The PTS Magpul MOE vertical fore-grip, or “VFG”, was made with the “thumb break method” in mind. The thumb break method brings the shooter’s non-dominant elbow up to provide a better shock absorber. It also brings the non-dominant hand up closer to the bore than more traditional grips. Finally, the shooter’s non-dominant thumb is either “broken” over the top rail or pointed straight forward on the upper part of the side rail. The PTS VFG is not an ungodly-long grip which un-knowing players will hold like the hilt of a Zweihänder. Instead, the textured fore-grip is much shorter than most, allowing you to comfortably use the thumb break method without having extra grip hanging out below your hand.

Another option for those looking to have more control over their rifles is the use of an angled fore-grip. A more recent development, the angled fore-grip allows the shooter to use the thumb break method with a slightly more ergonomic hold. Additionally, the angled foregrip helps position your elbow up in order to better handle recoil (again – not really a factor for airsoft gaming). 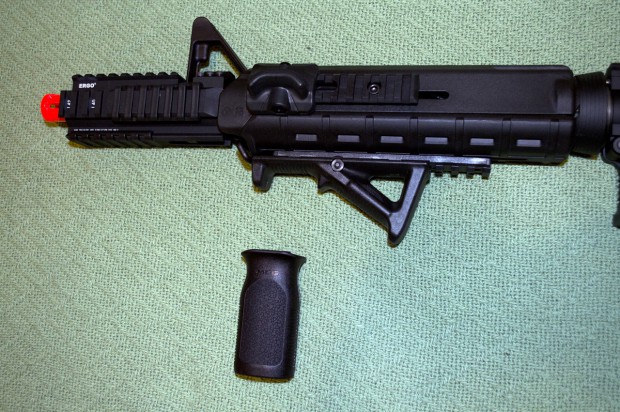 Showing the Gas Pedal as well as Vertical and Angled Foregrips.

An even more recent development has been thumb rests like the “PTS GoGun Gas Pedal”. The Gas Pedal attaches to a rail on your non-dominant hand side and gives you a thumb rest instead of having to “break” it over the bore. Proponents of this accessory claim it gives them all the benefits of the VFG/AFG thumb break method without any of the drawbacks. Calling the Gas Pedal a thumb “rest” is a bit of a misnomer as, in using the Gas Pedal, you are actually supposed to squeeze both the Gas Pedal and the fore-grip at the same time for enhanced stability and control.

You may be thinking that this is a load of bunk but the truth of the matter is that these methodologies will help you become more accurate on the airsoft field by way of increased control of your airsoft gun. Additionally, practicing good mechanics and fundamentals will help your muscle memory in case you one day want to try shooting real steel firearms. In addition, always remember to use the same basic gun safety rules that apply to real firearms to airsoft guns. Some argue that they are “just toys” – but, unlike most “toys”, these could get you shot if you point it at the wrong person out in public. Treating airsoft guns responsibly is the only thing that will keep counties from banning their sale and usage altogether. LA County already passed a law banning airsoft guns (it is currently being fought, legally) and others may follow suit.

Now, aside from all the politic stuff, I can wholeheartedly recommend any of these accessories for your airsoft playing use. A lot of what goes into which of them you will like more is based on your personal preference. I have become very fond of the angled fore-grip and Gas Pedal combination while a close friend of mine prefers the vertical fore-grip alone. My advice is to borrow a friend’s airsoft gun that is already equipped with them to check it out or head down to your local airsoft store to get up-close and personal with them at their indoor test ranges.

For those of you ready to purchase, here are the products links for the items discussed in this article:

Also, if you would like to mount a rail to your PTS MOE handguard, you should consider the Ergo Grip rail series: 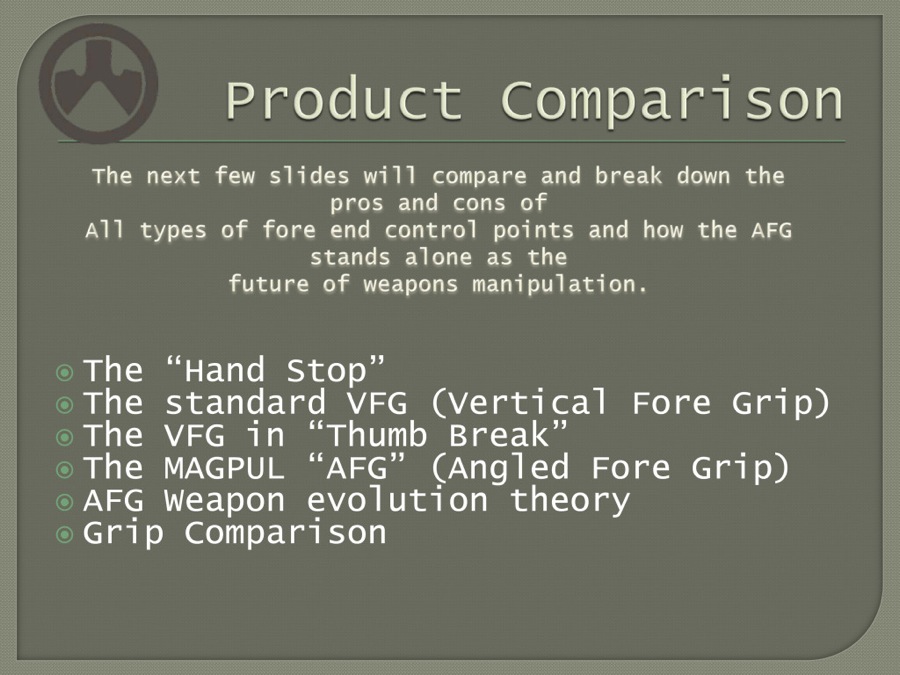 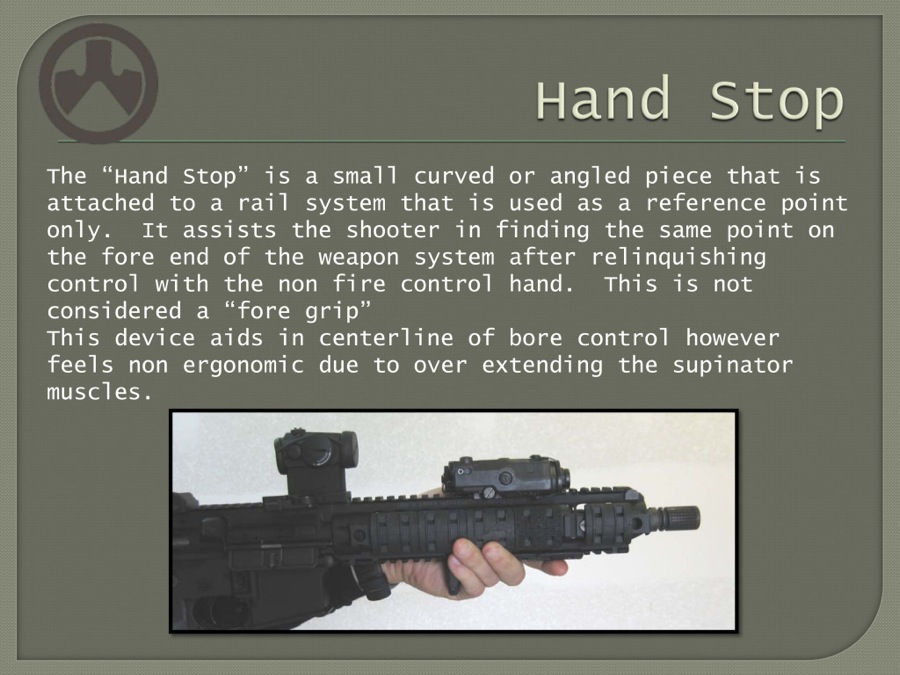 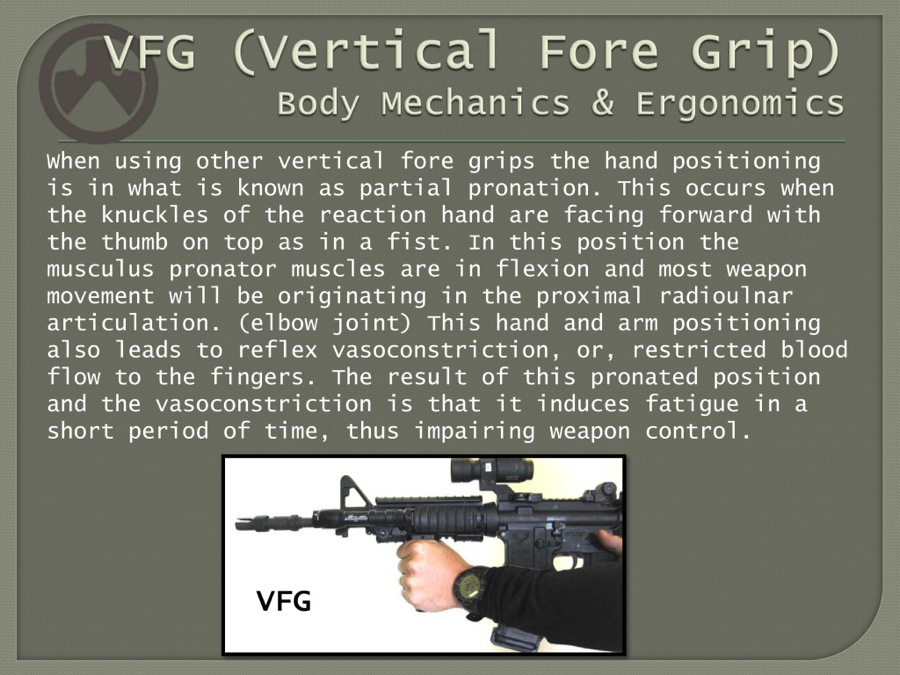 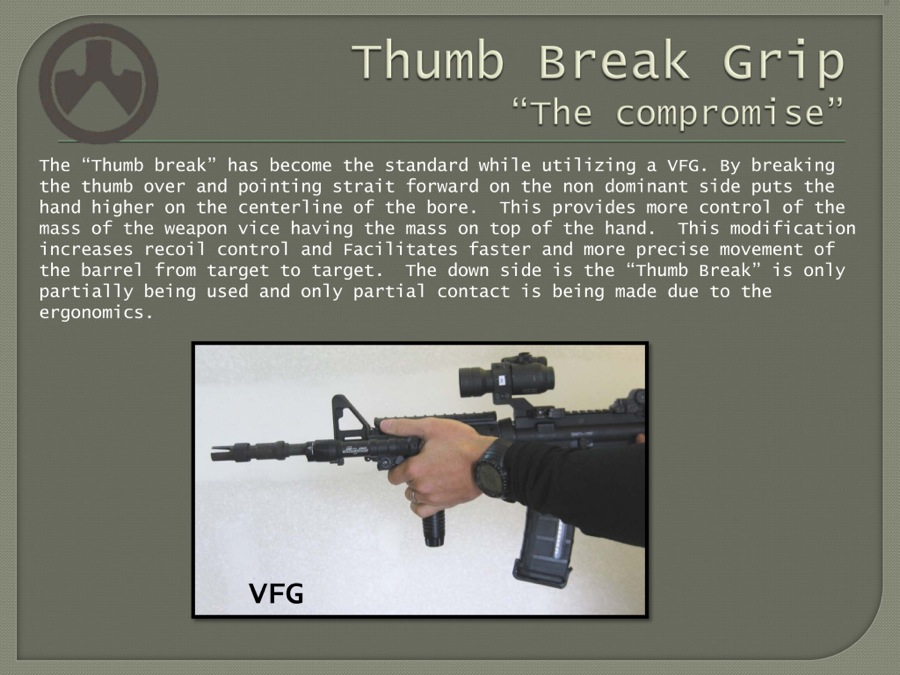 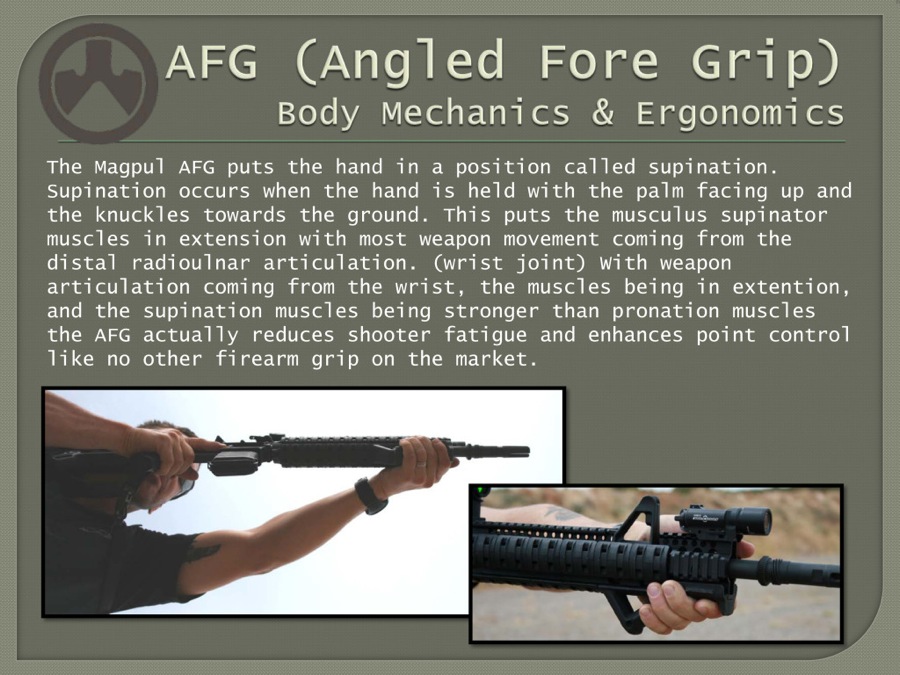 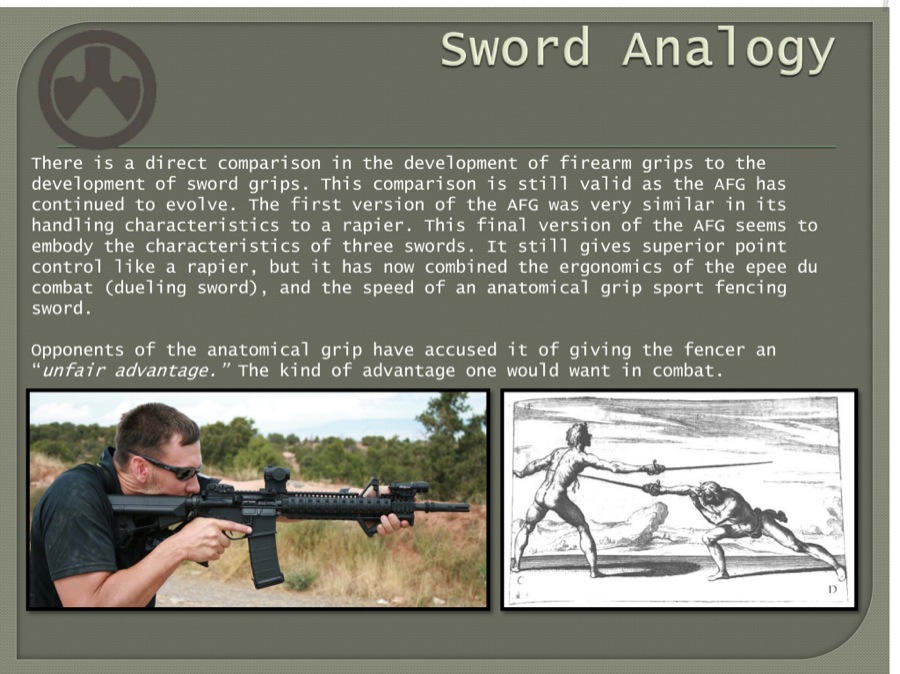 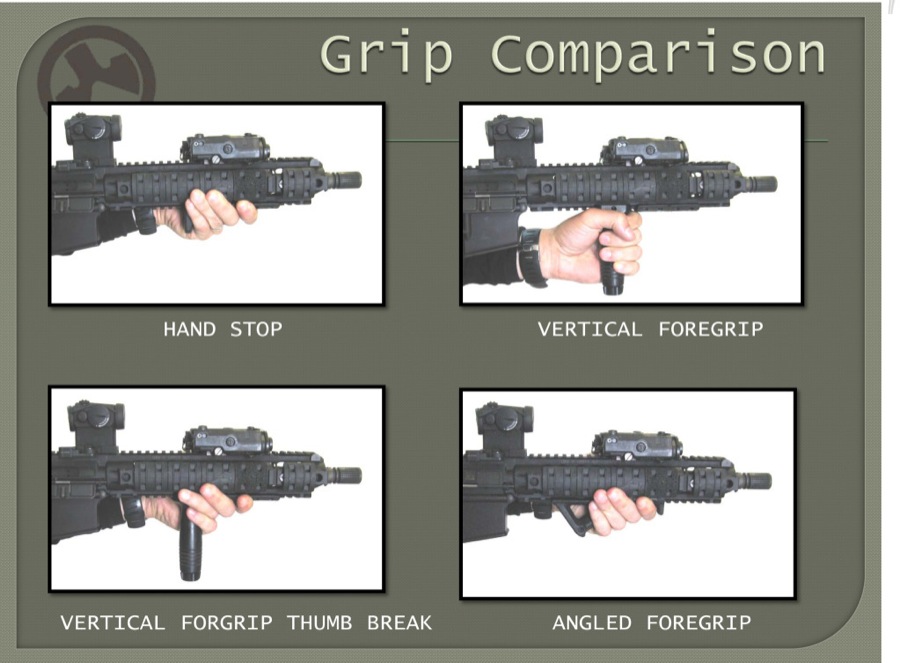 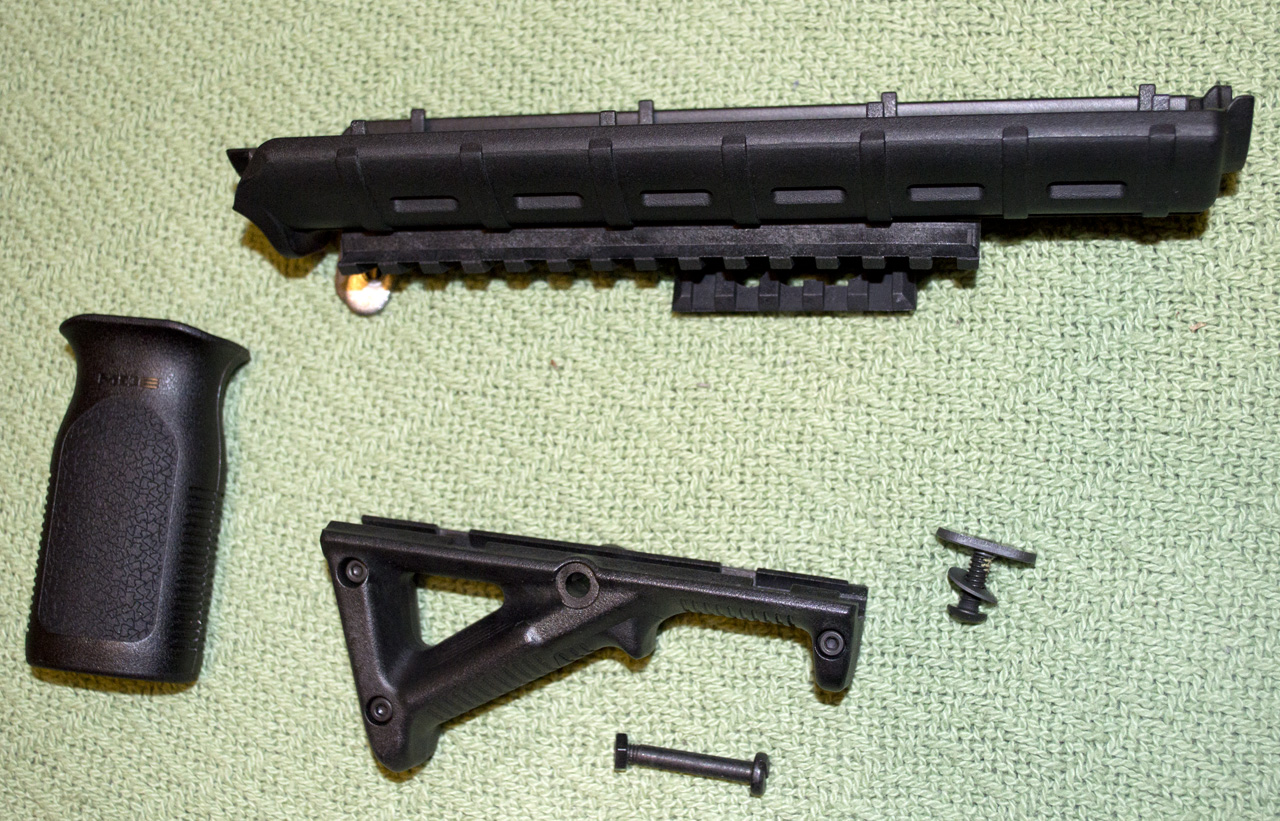 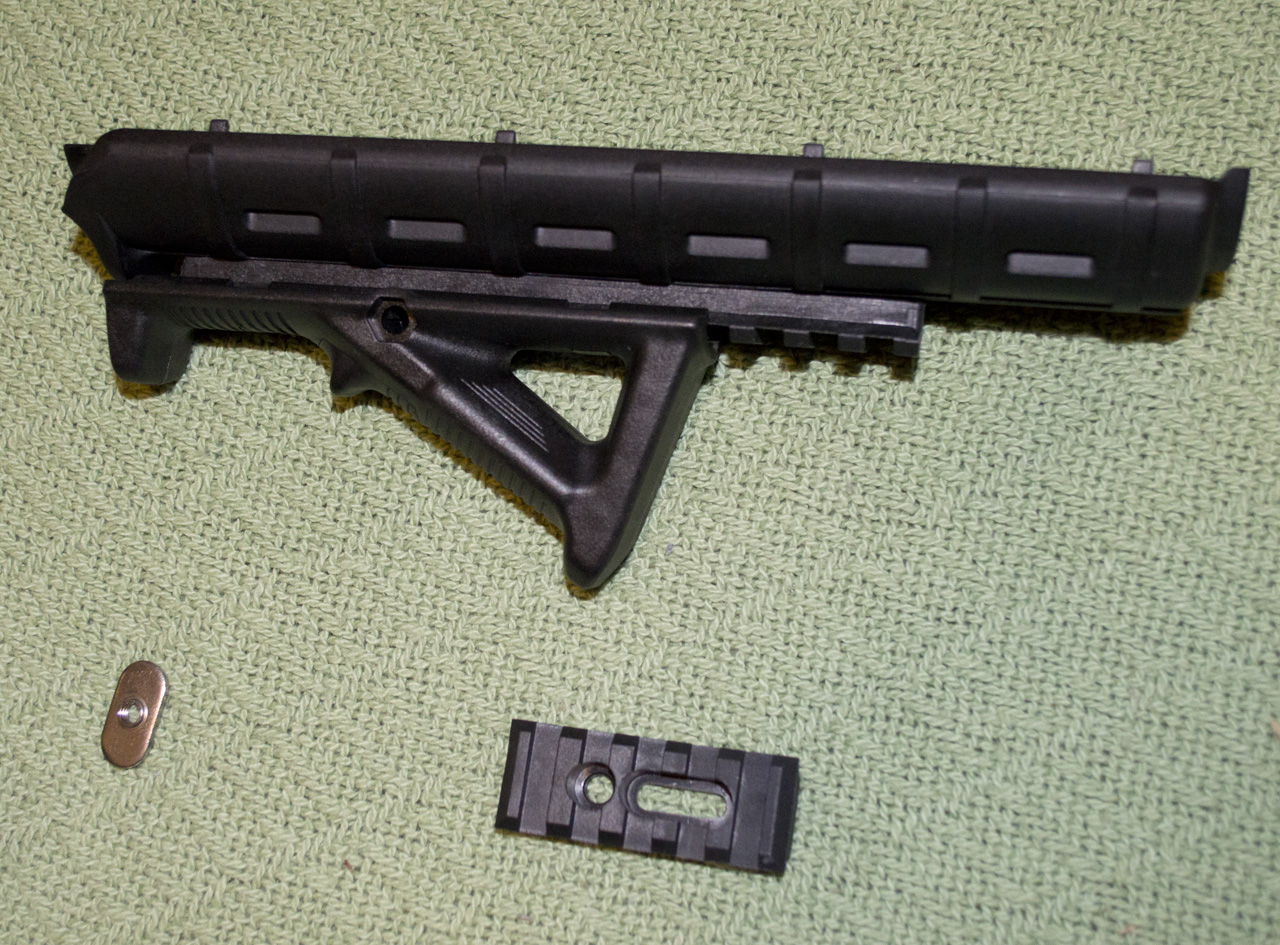 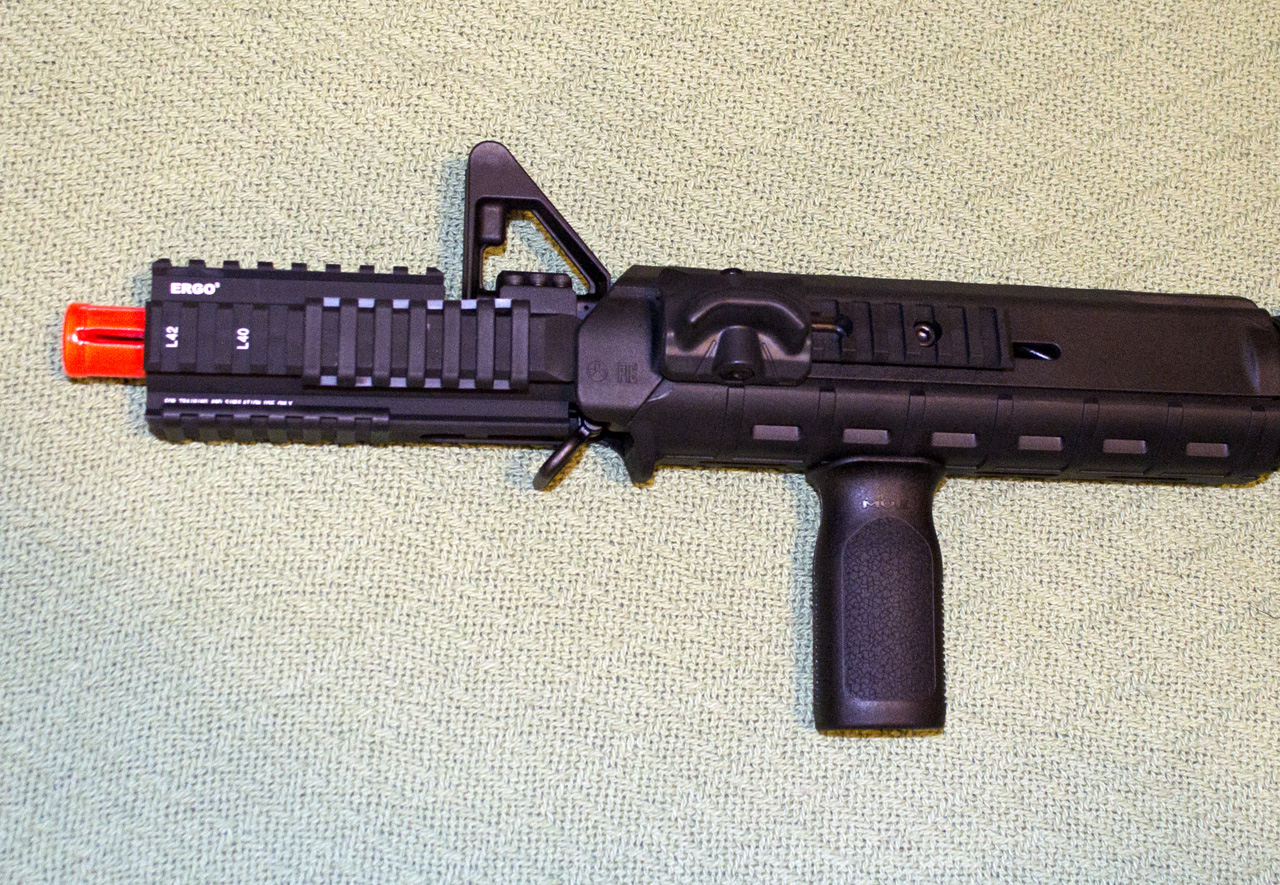 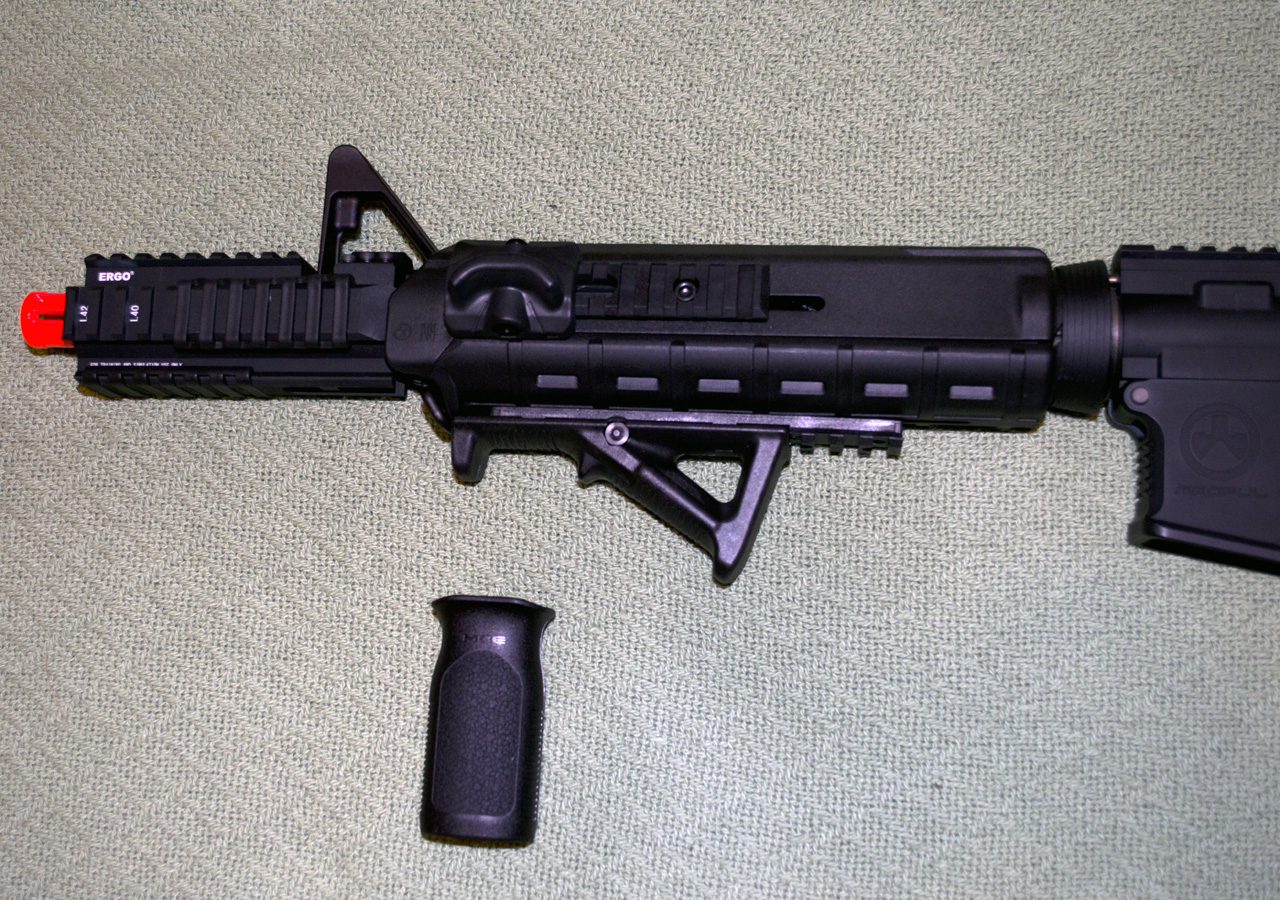 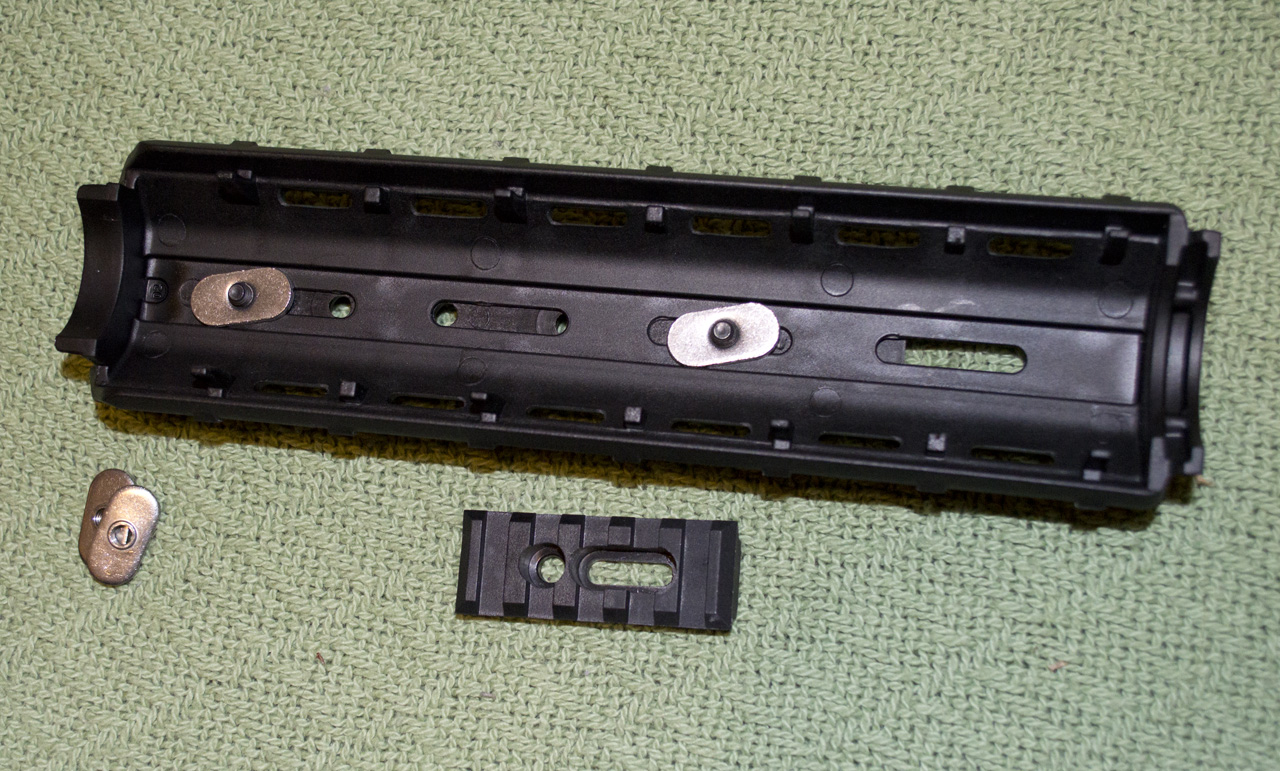 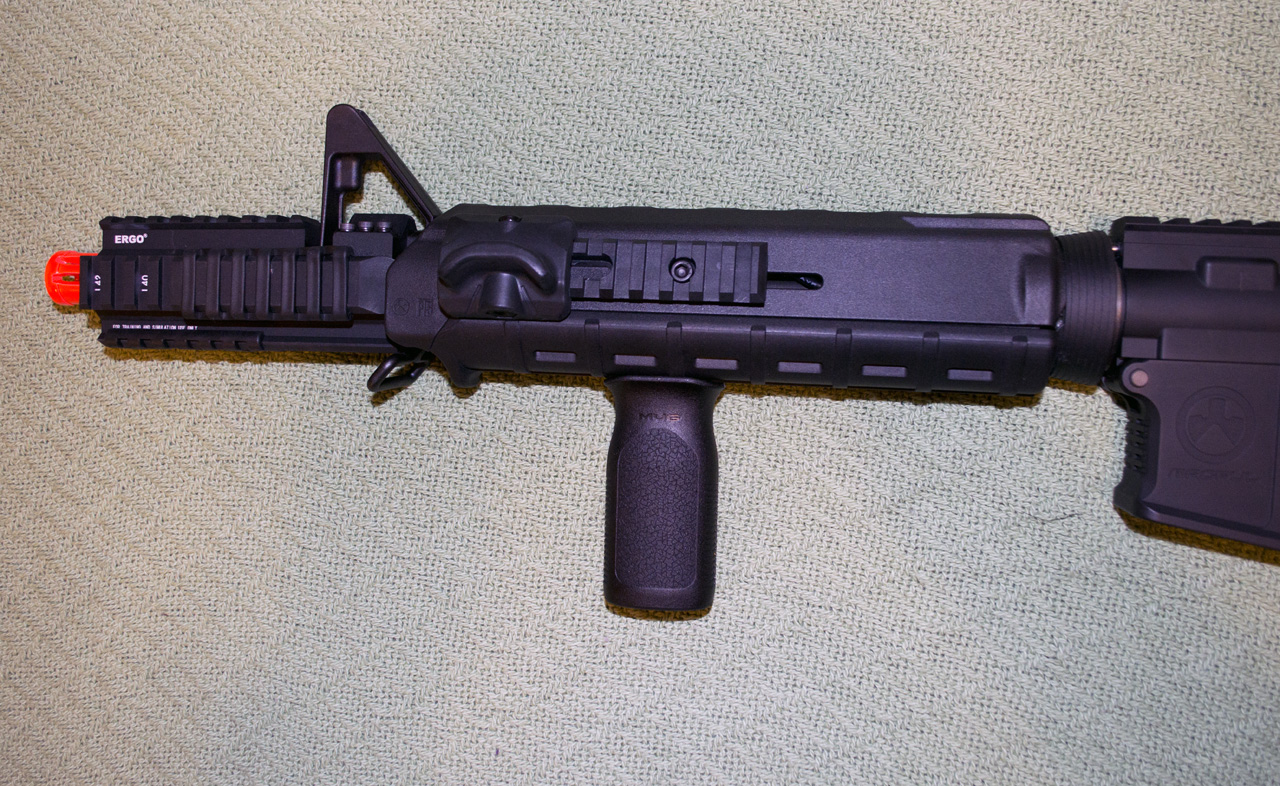 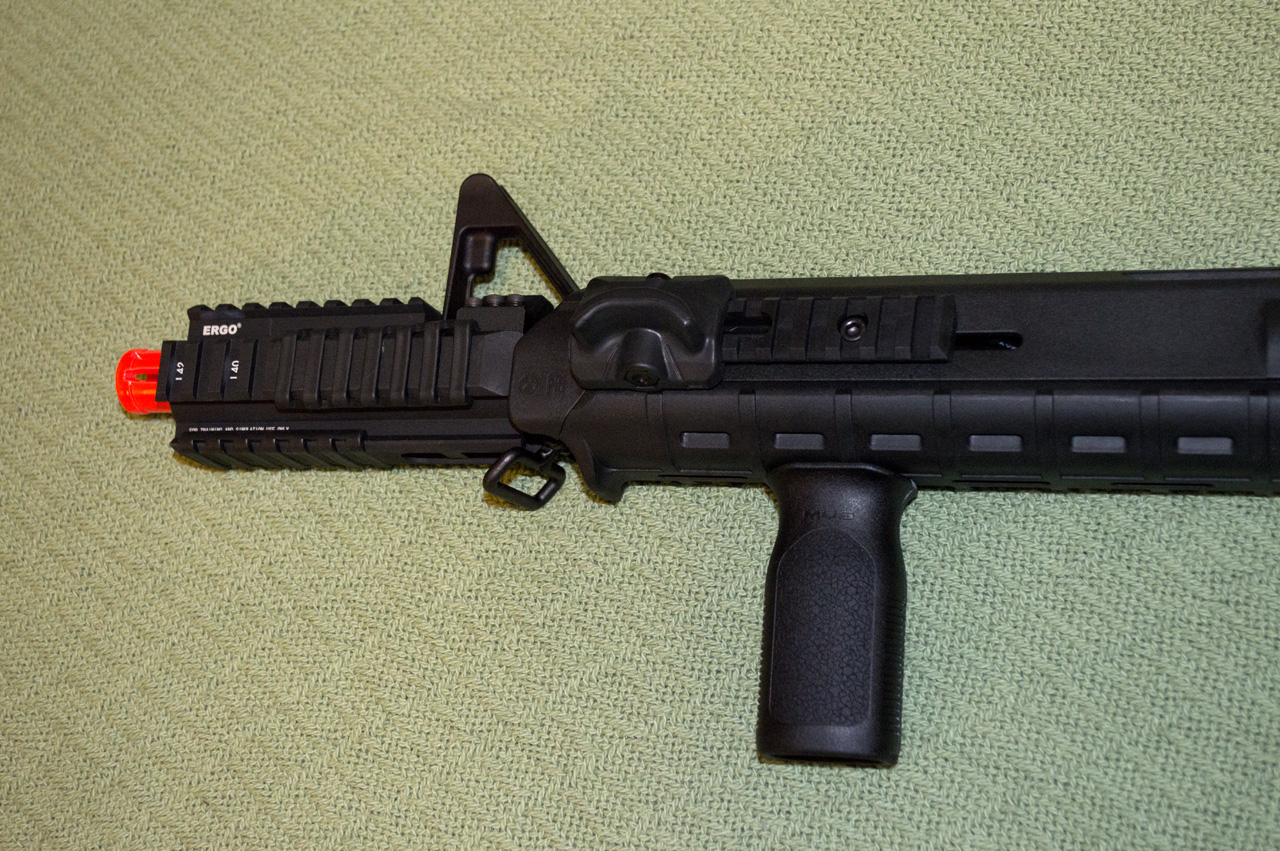 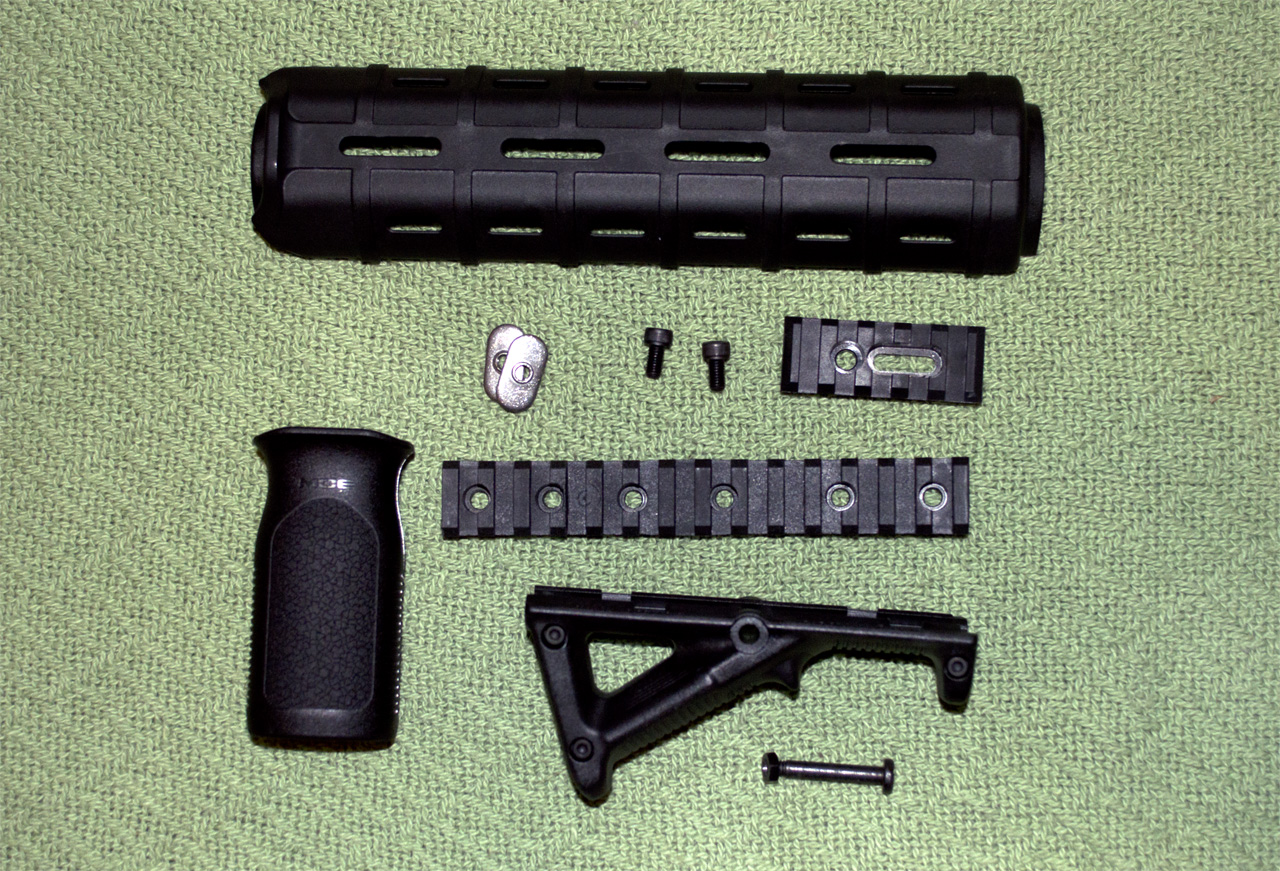 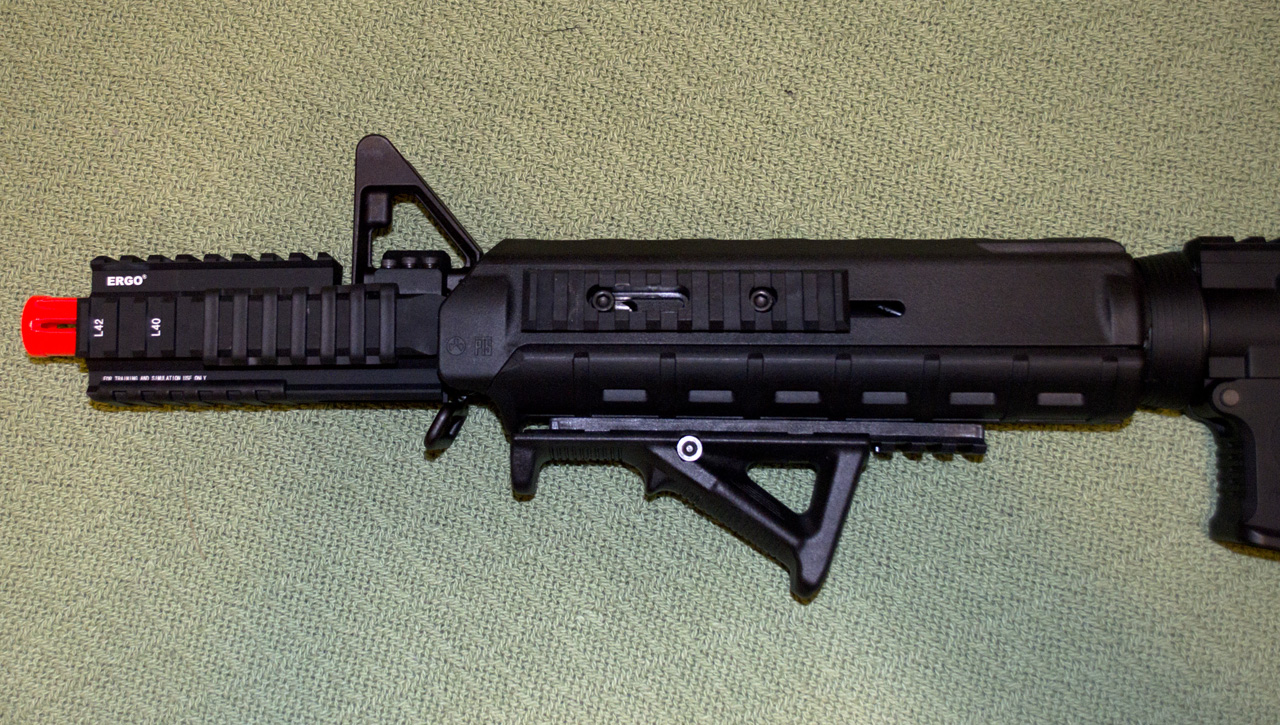 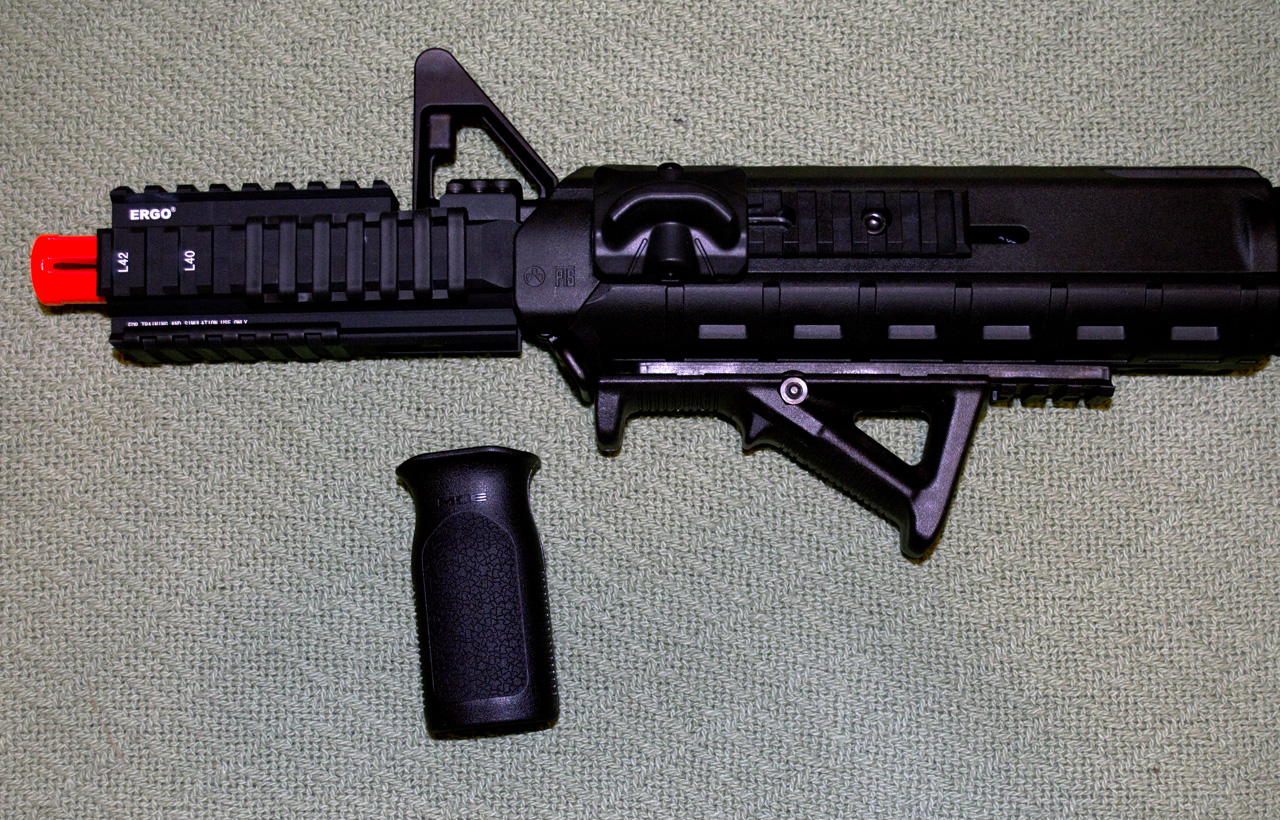 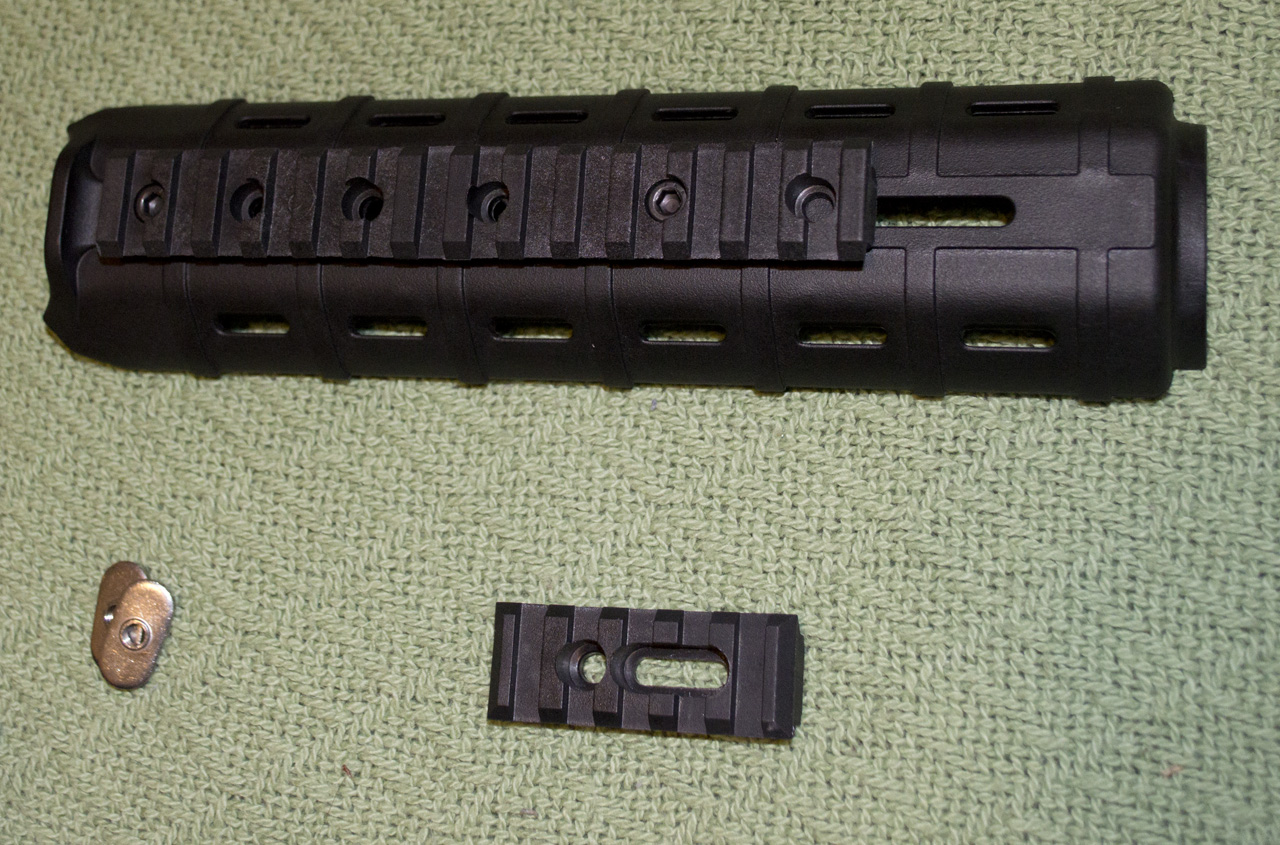 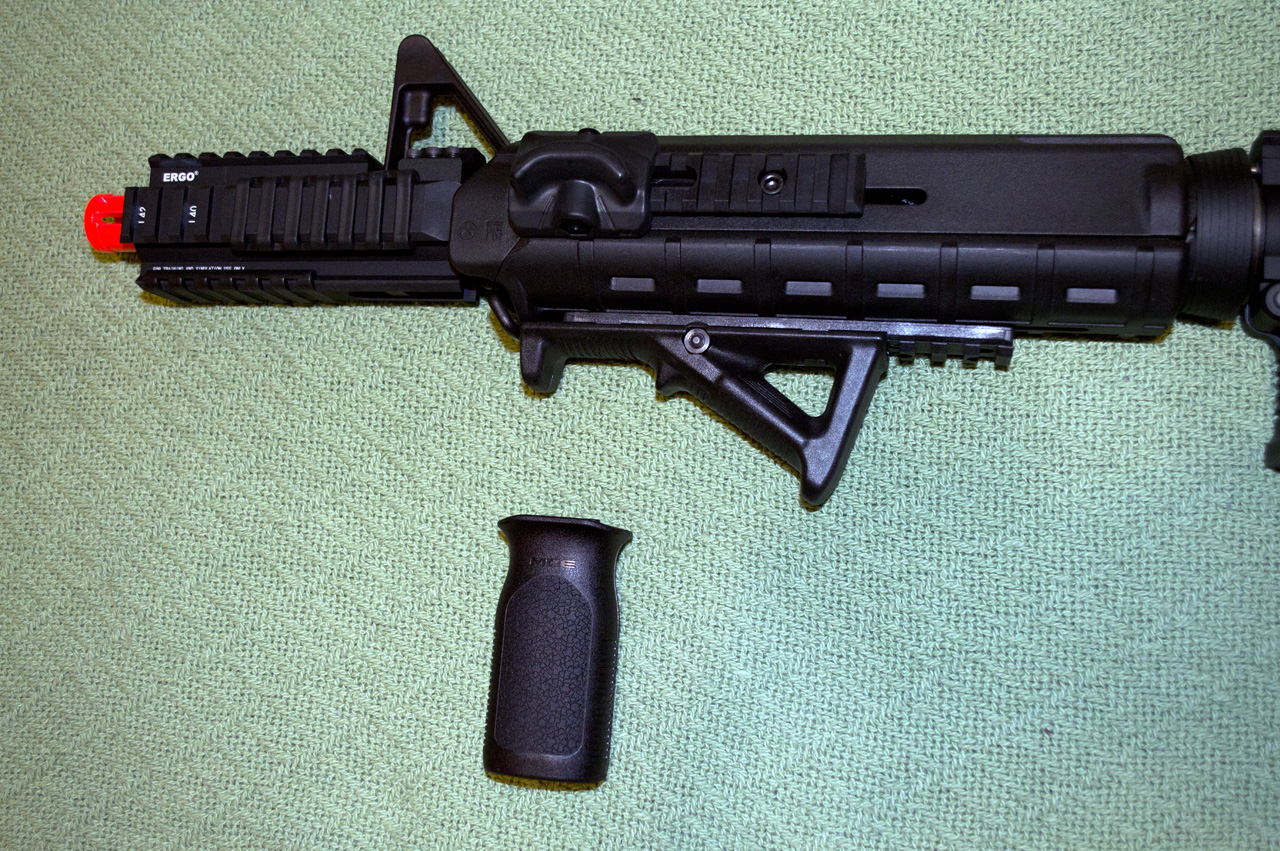