Our annual visit to New Jersey’s Six Flags Great Adventure’s Fright Fest took place this past weekend. Now in its 22nd year, Fright Fest takes over the entire park with shows, scare trails, and other Halloween-themed events that take place over the course of the seven week extravaganza.

Fright Fest kicked off on Friday, September 13 and boasts 6 haunted walk-throughs and 4 scare zones. There are 5 proper terror trails which we got to check out.

We visited on a perfectly crisp fall evening and arrived a little before the 6pm unleashing of over 200 zombies into the park. The evening kicks off with a zombie parade and then a 20 minute show that consists of a horde of Zombie dance numbers. It’s an ok show, they do a pretty good job with some nice dance numbers (my wife enjoyed it). Anyway, it’s a nice segue into the evening’s ‘fright by night’ as the show wraps up right around 6:30 and the bulk of the terror trails open at 6:45.

If you’ve been before, there is one new trail, The Darkness, and one completely revamped trail, The Manor, both of which are indoors and open at 2pm. The other trails are hold overs from last year and it’s safe to say they’ve improved. 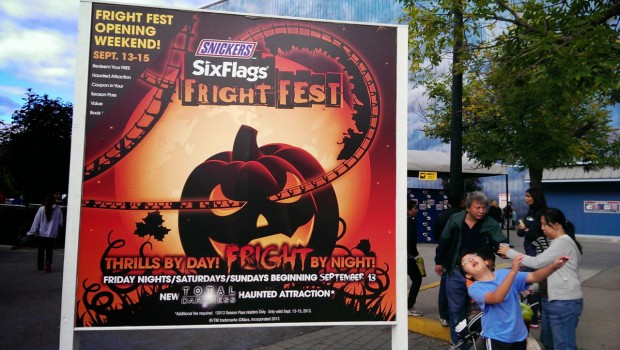 We started with the Asylum, which is packed with psychos. The winding path provides plenty of hiding spots for the ‘talent’ who use it to their advantage. The zombies packing this trail do a great job of interacting with the guests, and some of them are extremely skilled and show off an incredible amount of dexterity. It’s worth noting that this trail boasts the most disgusting bit we saw the whole night with a bathroom scene that they just took to the next level, going over the top with smells and visuals.

Next up, we took on Wasteland. A desolate trail of misery which includes some very cool special effects like fog, strobe lights, and a snow machine. There were also some awesome looking zombies here who blended into the trail while just standing still. They did an outstanding job of scaring the crap out of the guests as we witnessed multiple people absolutely freak.

We then made our way over to the other side of the park to take on Voodoo Island. This trail was solid with a good amount of witchdoctor-like zombies sprinkled throughout. We had one female zombie follow us through the bulk of the trail. She kept popping up out of nowhere, definitely put us on edge. The set pieces on this trail stood out as well, with some really large objects littering the area. It’s in a great part of the park which is very dark and fits the mood nicely.

The final two terror trails are housed next to each other in giant warehouse-like buildings. The first one we hit up was The Manor which tries hard to be a haunted mansion, but fails on multiple levels. The ceilings must be 40 ft high, yet the trail is set up with 8ft plywood walls that wind through the building. The rooms we weaved through are only lightly decorated (there is only one path). A bed here and there, an ornate frame on another wall, overall, just very sparsely decorated and only a handful of zombies we witnessed. I hate to say it, but their regular haunted house is a better scare. 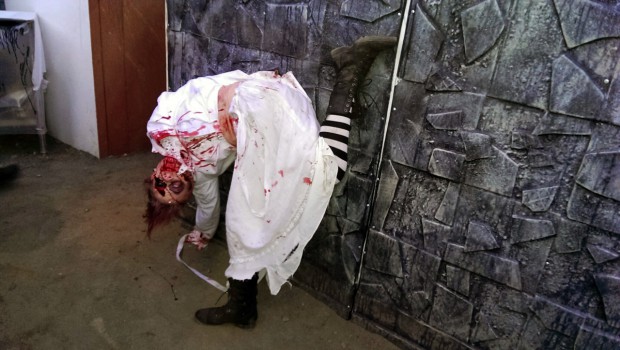 The last trail we took on was The Darkness. In theory, this is the coolest one as it takes place in a pitch black maze. We were given an 8ft rope which everyone holds in order to stay together and the first person is given a small flashlight to guide the group. We were leading our group and I think it’s safe to say you want to be in the back if you want the scares. Using the flashlight to find our way we were able to see most of the zombies that were hiding on this trail. Most were just dressed in black so that they could blend in and hiding around corners since there weren’t any objects in this trail since the theme is just the pitch blackness. Being up front sort of spoiled it for us since the flashlight exposed the badies, hence, being towards the rear of the rope seemed to be the best bet for scares. Up front it all just looked like black walls, not too scary and the novelty wore off after the first minute.

Throughout the park there are other scare zones, many of which had long lines so we were not able to explore them on this night. The one area we did walk through was the Circus of Thrills which was packed with the largest ratio of zombies (all psycho clowns!) to people and also had several death-defying circus acts including a Globe of Death. And, as in previous years, there are a ton of shows and activities for kids that take place during the day (though we saw a lot more kids than I would have thought during the evening). We didn’t get a chance to check these out either as time ran out on our evening when things began to shut down at 10.

The only downside I can foresee are wait times. All of the Terror Trails have an additional charge (starting at $8, with combo packs running between $15-60, the later offering front of line access) and I estimated the wait time on the Saturday night we attended to be 45-60 minutes. In the past, when we’ve gone in more inclement weather, the lines were much shorter, the same waits go for most of the coasters as well. I don’t see how you could see/ride much if you go for just an evening. Also, signage to find the trails was minimal at best and made them difficult to find. 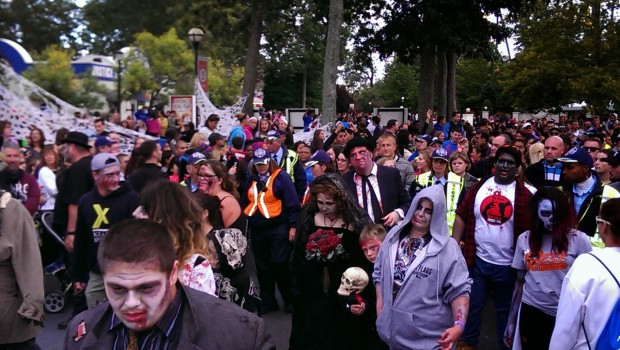 Overall the park gets decked out for the festivities, the zombies are top-rate and get into their roles. In the coming weeks there are several special events so definitely check out their calendar as they have some ‘runs’, blood drives, and even a triathlon scheduled.  I’d rate the terror trails as follows:

Last thing I want to mention, while nothing to do with the Fright Fest, the fried chicken they serve is delicious. We look forward to next year! 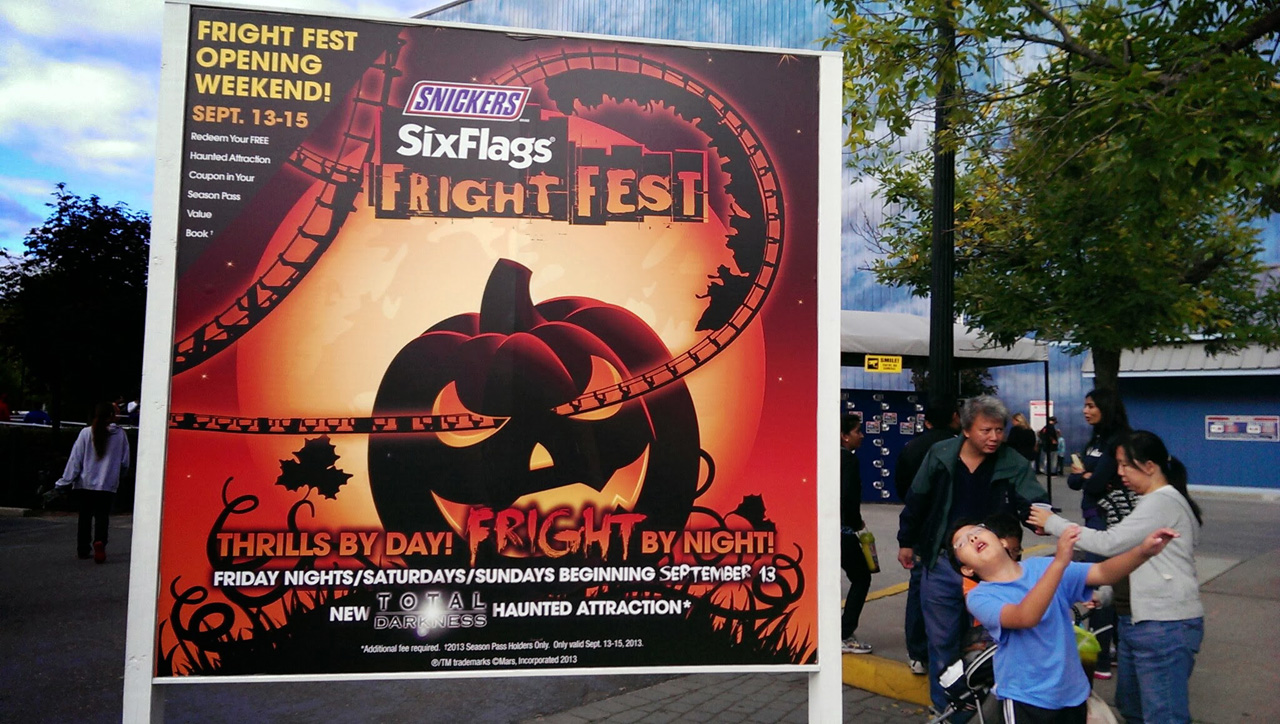 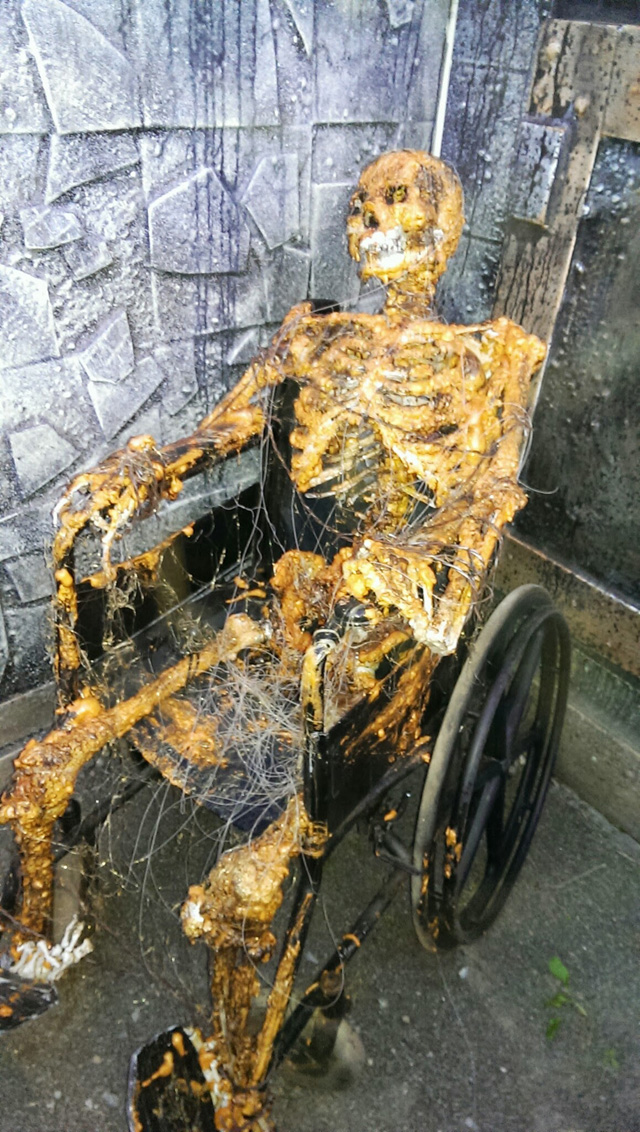 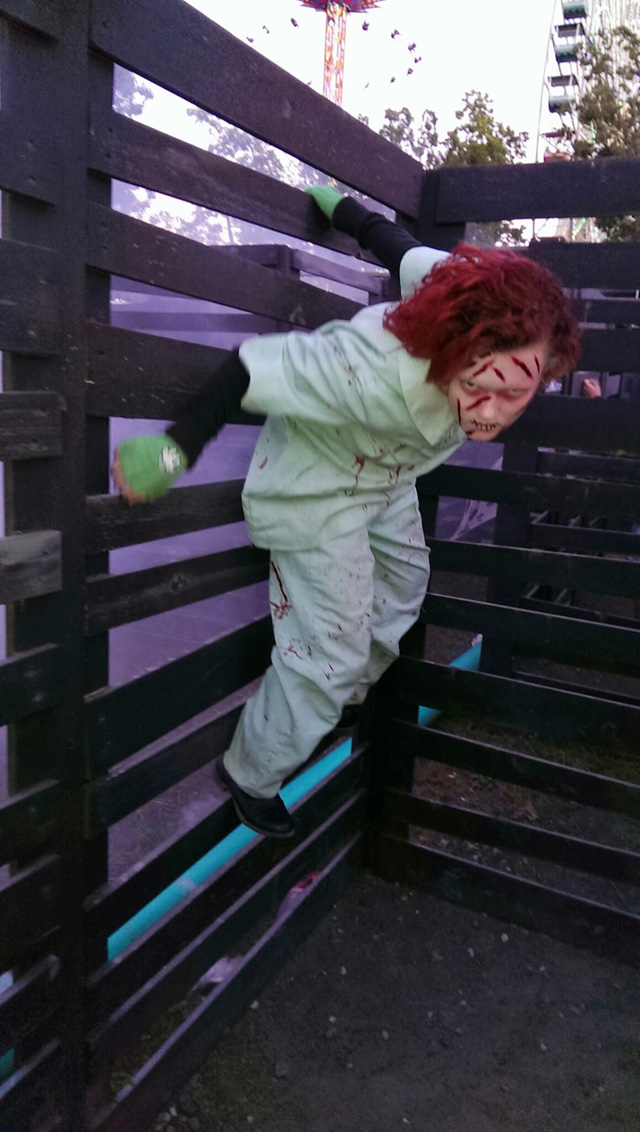 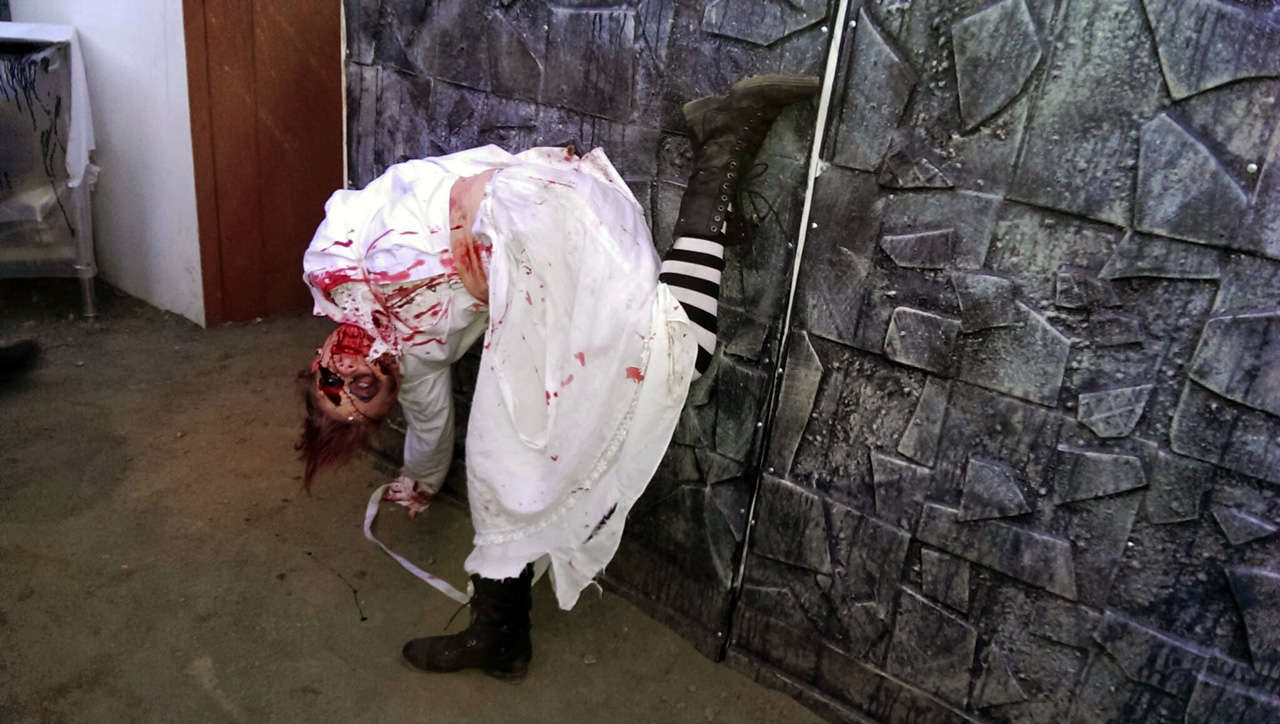 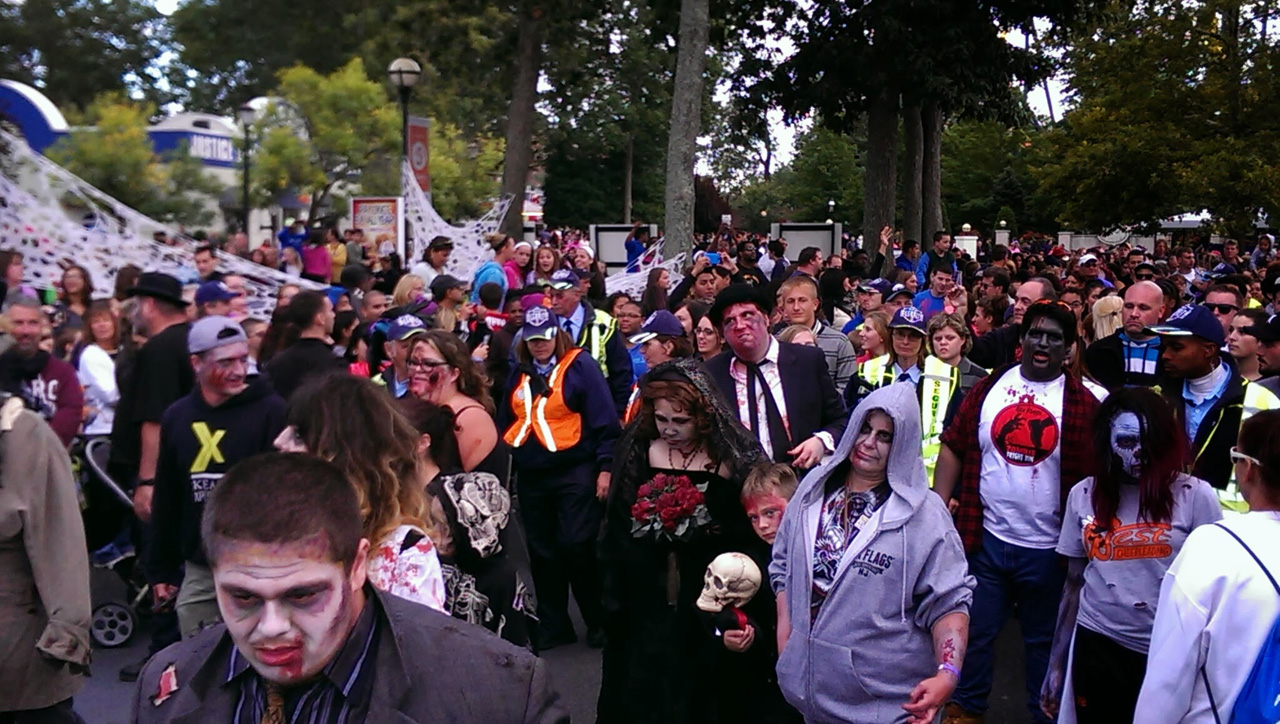 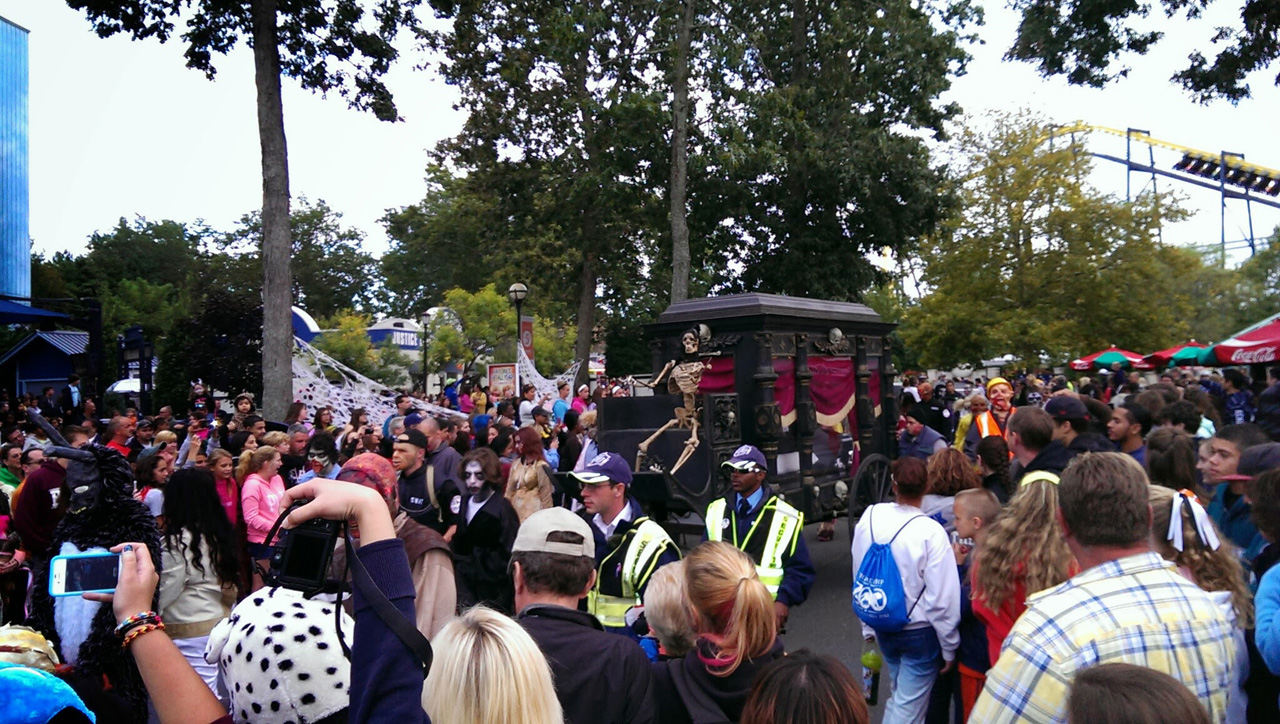 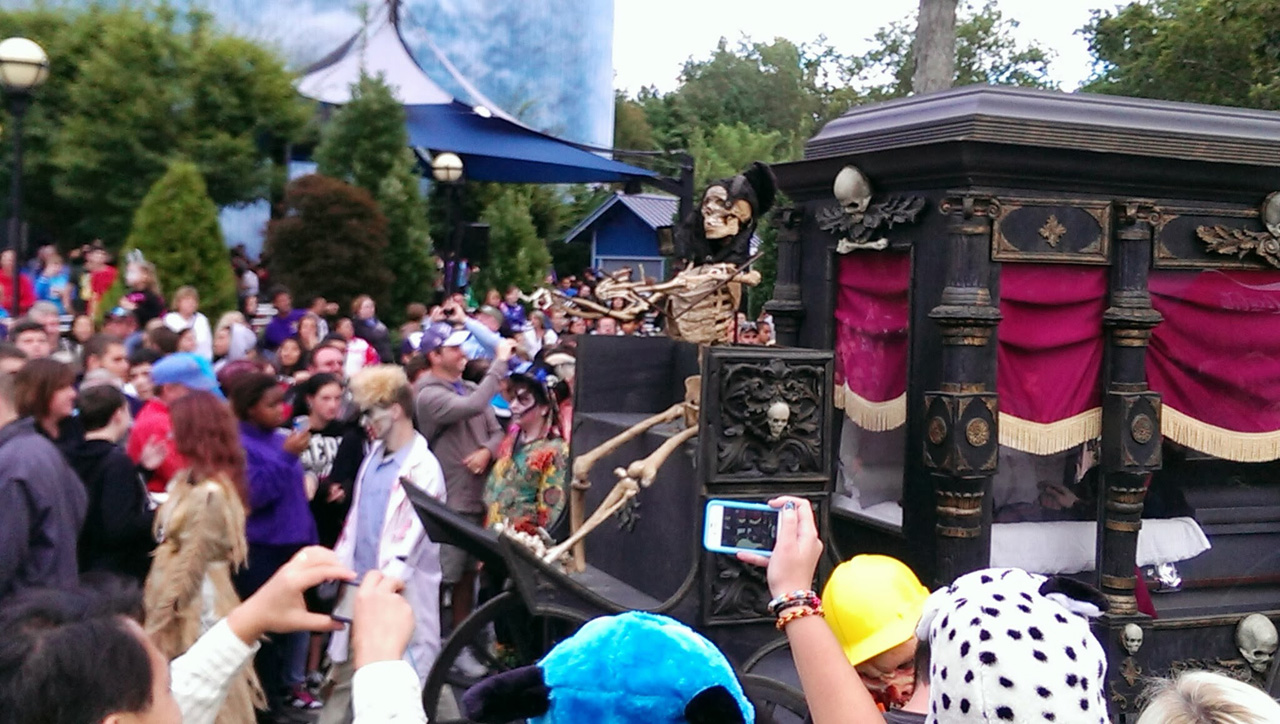 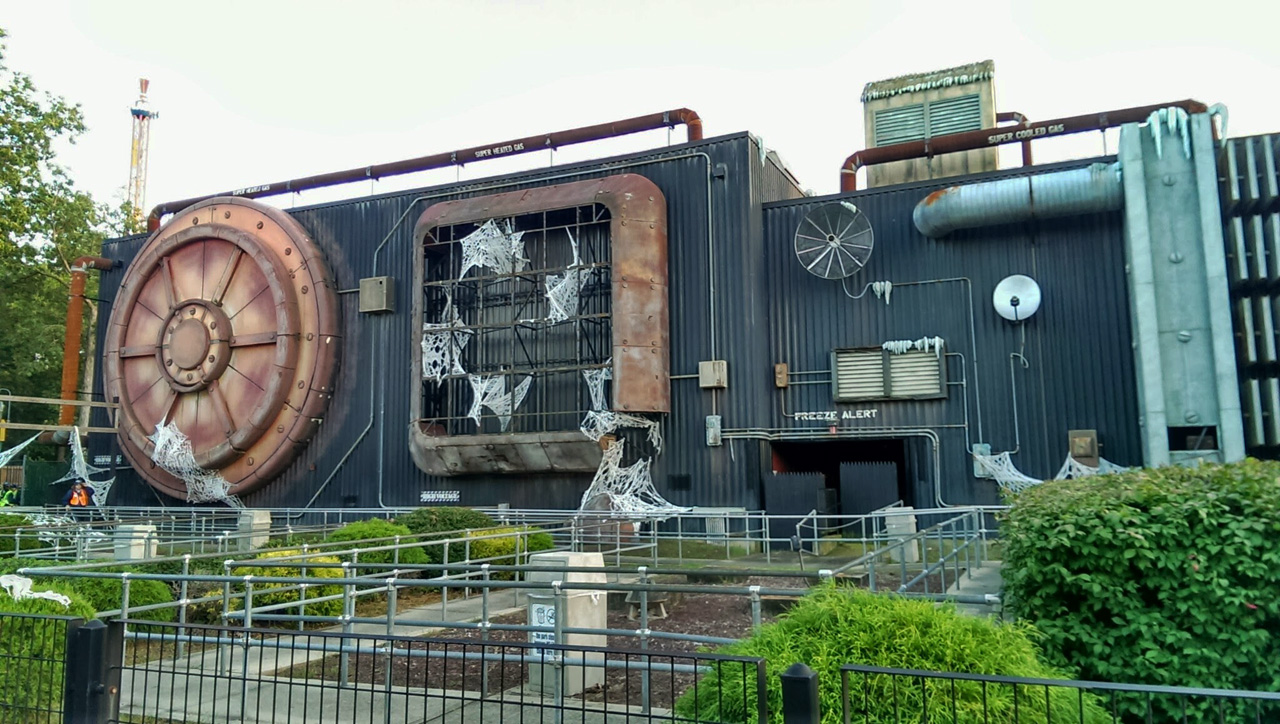 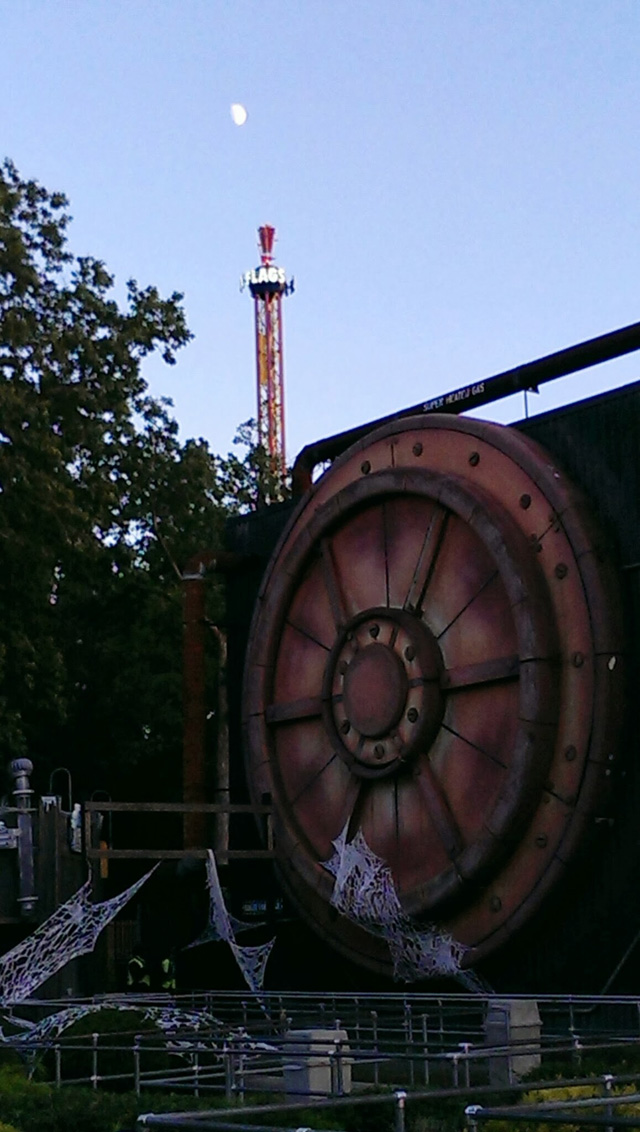 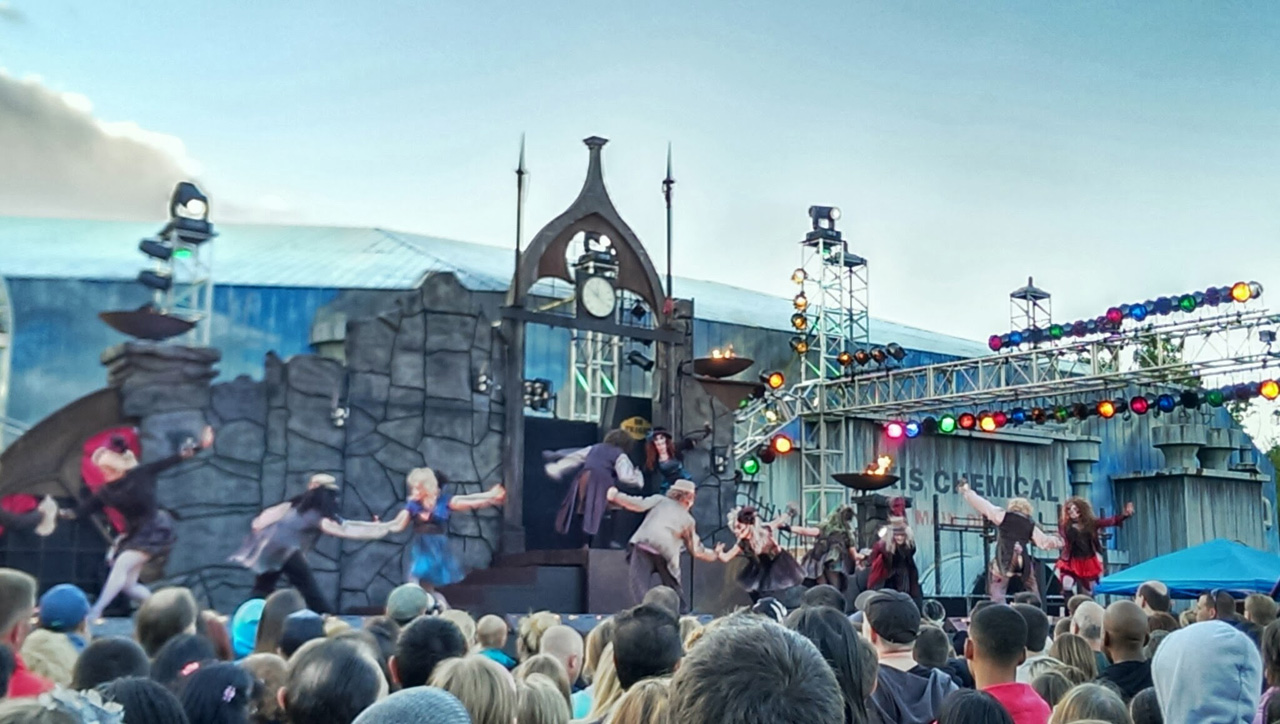 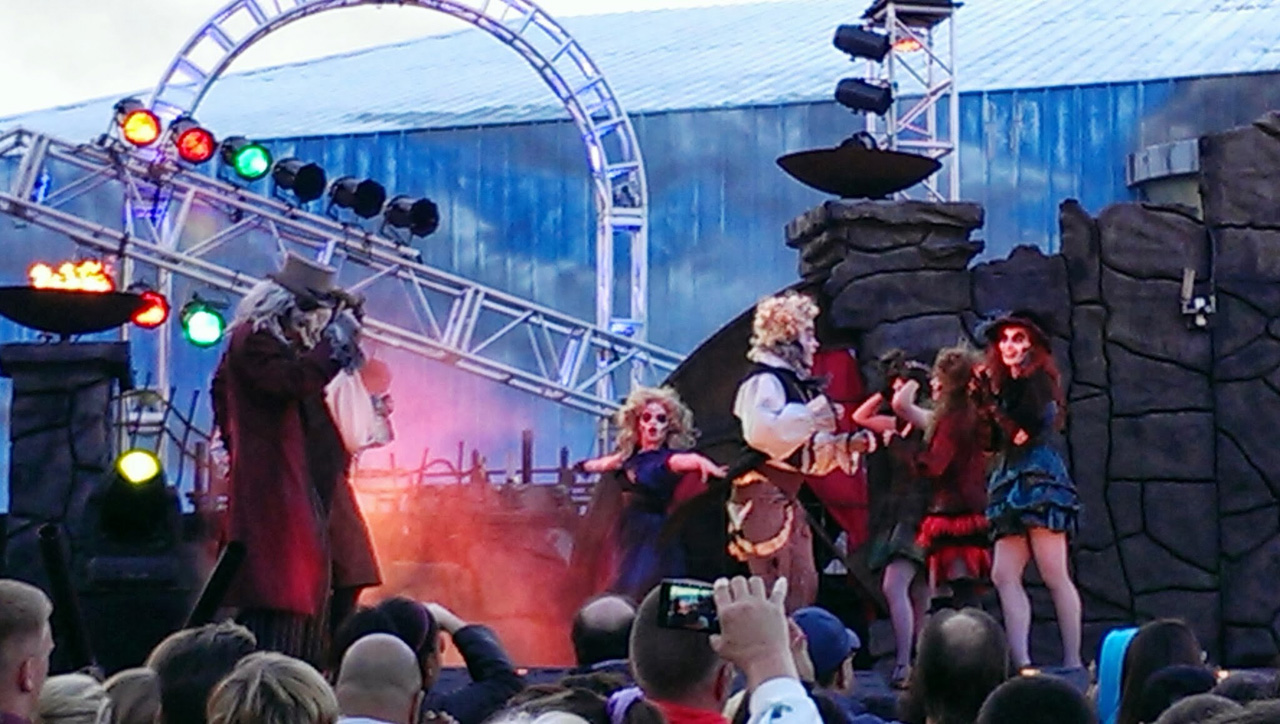 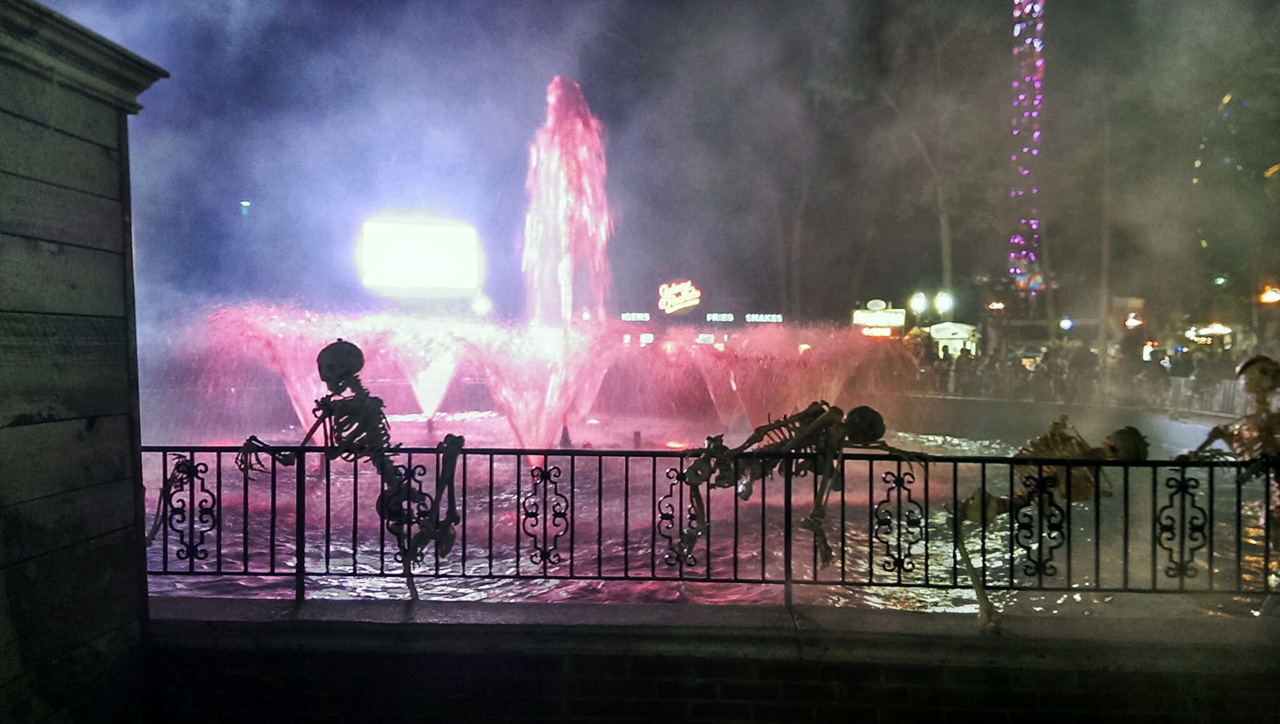 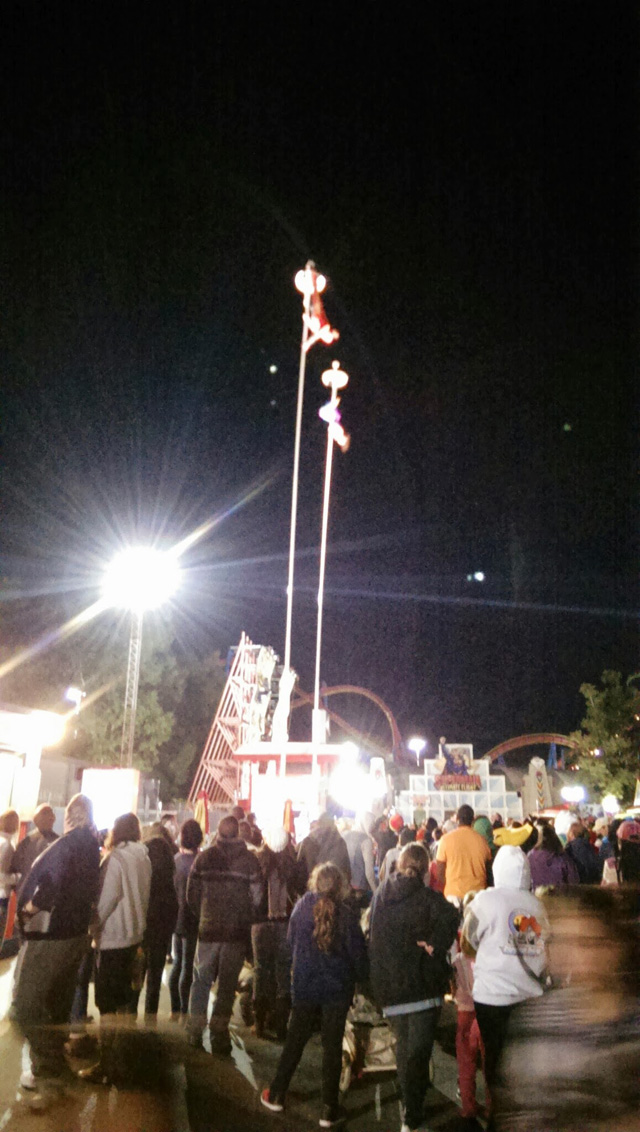