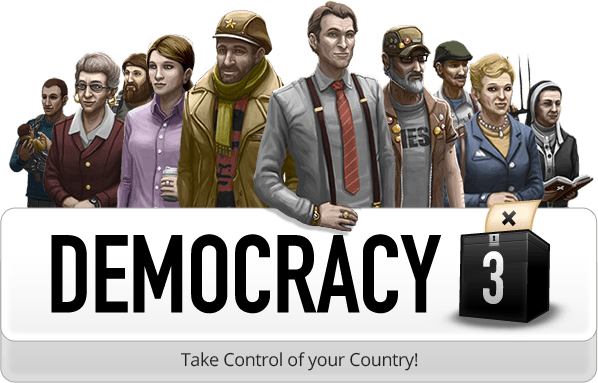 September 12, 2013 — Positech Games, developers of Gratuitous Space Battles, Are happy to announce that once more they are bringing Democracy to the people of the world! Democracy 3 is the third in their series of complex and deep political strategy games where the player takes on the role of President or Prime Minister, charged with the task of keeping the population happy, the economy booming and preventing society collapsing around them.

Democracy 3 is the only game of it’s kind. Not an election-simulation, but a government-simulation, built around a custom-programmed neural network and unique iconic user interface that represents the thousands of simulated voters, pressure groups, policies, laws and statistics that make up a detailed model of a western democracy.
As president, you decide what laws to set, which taxes to raise (or cut) which government programs to expand, introduce or cancel, whilst keeping one eye on the countdown to the next election. All political careers end in failure, and Democracy 3 is thus a game that cannot truly be won, only eventually lost.
The game is available for pre-order and beta access now from the developers site here:
http://www.positech.co.uk/democracy3/register.php
And pre-order customers will get DRM-free copies that run on PC, Mac or Linux. A steam key for the games eventual steam release is also included. There is a website with more information on the game here:
http://www.positech.co.uk/democracy3/index.php
An HD trailer introducing the idea of the game is here:
http://youtu.be/JjNTeqvd_qk
And there are already some youtube lets play videos such as this one:
http://youtu.be/ywPKqloCnks
There is also the inevitable facebook page for Democracy 3 here:
https://www.facebook.com/democracygame