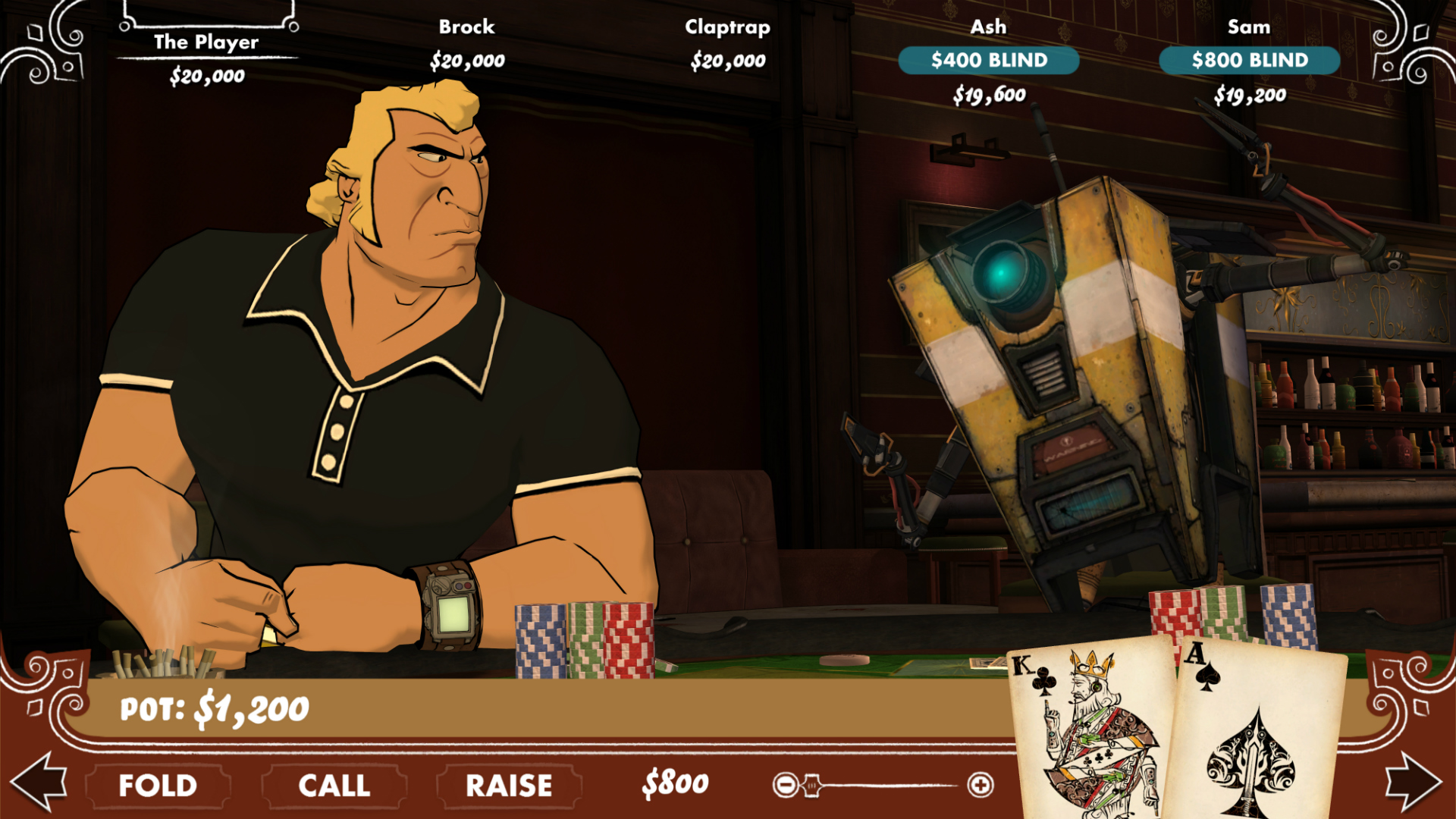 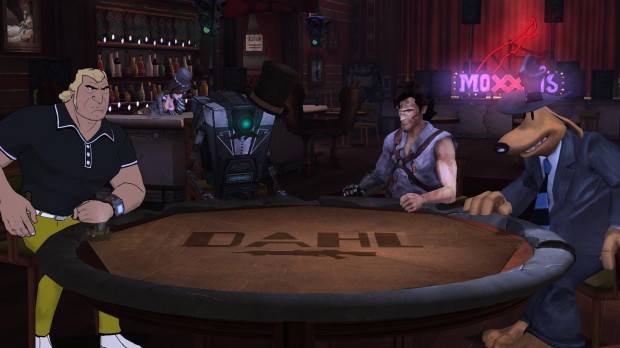 Telltale Games has released their sequel to last year’s poker simulator with Poker Night at the Inventory 2, or just Poker Night 2 as I will be referring to it in this review.  Last year’s version had decent game play, great voice acting and fantastic unlocks to get me to buy in for the $5.00 price tag, but after the unlocks were gone I soon found that the repeated jokes, lack of multi-player, and the absences of other game modes would keep me away from the game.  With Poker Night 2, Telltale Games brings us another set of four competitors to try to take our buy in, with new unlocks and even a new game mode, but is it enough to keep Poker 2 on our hard drive after all the bounties have been collected?

The story line for Poker Night 2 is extremely straight forward.  You play as the fifth player being recruited for a poker game at the Inventory with four characters from around the world of media.  With your $20,000 buy in, the game begins until only one person is left standing with the cash.  Since the story is very light, I will focus this section more on the characters of the game and how they interact via dialogue.  Poker Night 2 has a few well known characters from the movie, video game, and television worlds.  The four other players are Brock Sampson from The Venture Brothers, Sam from Sam and Max, Ash Williams from The Evil Dead movie trilogy, and Claptrap from the Borderlands video games.  Poker Night 2 also has a new dealer for this tournament, GLaDOS from Portal brings her lovely wit, charm, and the occasional threat to the game.  Other characters such as Capt. Reginald van Winslow, Doug from The Walking Dead, and from Borderlands both Moxxi and Steve make appearances during game play.

What sets Poker Night 2 above your common poker video game, in terms of story, is the dialogue that occurs between the players and other characters involved.  With the addition of GLaDOS, we have five active characters this time instead of four from the last game.  The dialogue is very well written, for the first couple of times you hear it.  After that, like anything else you hear over and over, it will start to get older and older until you just don’t want to hear it anymore.  Poker Night at the Inventory knew this would occur, so we had the option of limited dialogue.  However, for Poker Night 2, that option no longer exists so you will just have to learn to cope with it.  The jokes are really well written and are actually funny, along with the set conversations that the characters have with each other.  Even with my extensive play through since the game was released, I am still running into new dialogue every once in a while, but it is hard to have to listen to the same joke over and over again the more I play.

Poker Night 2’s backgrounds and interactions will also change depending on what set of chips, cards, and poker table you are using.  These background changes will also change how the characters leave the table after they have lost all their money.  For instance, using all of the Borderlands unlocks, the Inventory gets dressed up like Moxxi’s bar, and Steve helps our players leave the table in some of the funniest moments of the game.  I really feel that this game did a great job in setting up an atmosphere that is a blast to play in, with some great writing for our players.  The only negative I have is how much gets repeated the more you play, but that is hardly surprising considering the type of game Poker Night 2 is. 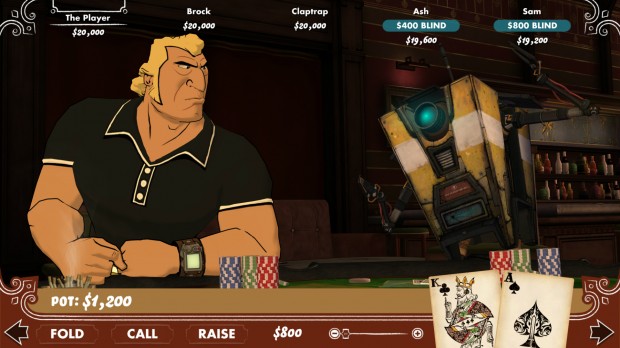 Poker Night 2 this year offers two game play modes, Texas Hold ‘Em and Omaha Hold ‘Em.  Both of these modes are no limit, so bet whatever you feel like.  For those of you that don’t know, the difference between the two modes is the amount of hole cards you have in your hand.  In Texas Hold ‘Em you get two cards while in Omaha Hold ‘Em, you get four, but only get to choose two of them to make your hand.  Both of these modes are presented well and play even better, but then again it is poker so it isn’t that hard to get right.

During game play, the player has a chance to buy the other characters drinks using tokens that you win in-game.  These drinks will eventually get the characters to reveal their tells, making it easier for the player to catch a character in a bluff.  I didn’t use this system as often as I probably should have, since the same tokens you use to buy these drinks are the ones you use to unlock new decks, tables and chips.  I also didn’t see to much of a increase in my winning probability using the drink system, but it was fun to make Moxxi actually do something, instead of just hanging out in the background behind the bar.

Now, let’s get to the other major reason why many of you are eyeing this game, the unlocks.  Like Poker Night at the Inventory, Poker Night 2 has a series of unlocks that you can win when you win the bounty items from each character.  These items vary from character to character, from Ash’s Necronomicon to Claptrap’s Spike VG award.  In order to get the character to place the bounty on the table, you must first satisfy three random requirements, such as “win a showdown” or “go all in against two other players and win”.  This time, you will receive an unlock for two games, Team Fortress 2 and Borderlands 2.  These items are all cosmetic changes to your characters for each game, such as the “Necronomicrown” for the Pyro in Team Fortress 2 or the “Man with a Gun” head for the Commando in Borderlands 2.  These items help extend the game play of Poker Night 2 and makes the repeatable dialogue that much more tolerable.  However, once you have played the game for hours on end and have unlocked everything there is to offer, Poker Night 2 will no longer have any appeal.

This appeal could have lasted much longer if there was online, or even local, multi-player.  But there isn’t, this game can only be played solo.  I understand why the developers don’t want to have the players play online with the characters, that would create way to large of a table and take to long to play, but why the developers still haven’t added in an online mode where players can just play poker with each other is beyond me.  This would help Poker 2 keep it’s freshness long after the last unlock has been dealt with.

Voice acting is fantastic for this game, mostly because Telltale Games went out and grabbed the original voice talent for most of the characters.  Sam, Brock Sampson, GLaDOS, and Claptrap are all voiced by their original actors from the original sources.  David Nowlin, Patrick Warburton, David Eddings and Ellen McLain all lend their talents to the game in roles that they are very familiar with.  Max and Ash Williams are not voiced by their original actors, which was disappointing for Ash.  Truthfully, I could not tell that Max was being voiced by a new actor, which is a great thing for this game.  Not having Bruce Campbell available to voice Ash Williams was disappointing to me, but not a deal breaker.  Danny Weber does a good job in trying his best to sound like Bruce Campbell, but fans of the Evil Dead series will hear the difference, and that is enough to take you out of the experience if you are a huge Evil Dead fan. 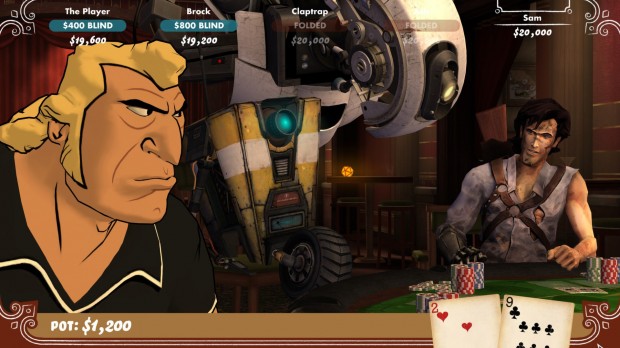 The visual aesthetics of Poker Night 2 are also fantastic for the most part.  The backgrounds change depending on what unlocks you are using, and the interactions the characters have with these backgrounds are great additions to the game.  The game does suffer from some graphical hitches here and there, like missing animations and random freezes.  I thought maybe it was just my PC having some issues with the game, but these same problems showed up on my Xbox 360 version as well.  It’s a shame that this occurs, but it is a $5 game, so how loud am I going to complain.

Poker Night 2 is a great game, it really is.  I enjoyed the character interactions more this time around it seems, and I really enjoyed the changing of the visuals using the unlock system.  The game plays better then it did in the first version, simply by adding one more choice in game modes with Omaha Hold ‘Em, but still not having any type of multi-player modes severely limits the amount that you will play this game.  The unlocks are a great incentive to keep returning to Poker Night 2, but once they are all gone, this game has nothing more to offer it’s players.  Even with that, I still recommend this game to anyone that enjoys a good poker game with great writing.  Poker Night at the Inventory 2 is available now through Steam for $5.