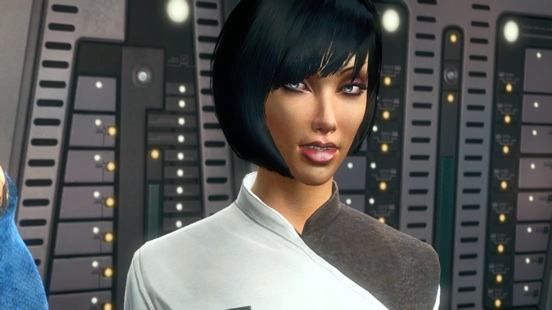 March 12, 2013 — On April 23, STAR TREK® The Video Game reunites the crew of the U.S.S. Enterprise for an amazing, completely new Star Trek adventure – and alongside Kirk, Spock, Bones, Scotty, Uhura, Chekov and Sulu will be two new characters making their first appearances in the Star Trek universe

As the game begins, Kirk and Spock are called to aid in the rescue of a mysterious space station that is heading towards catastrophe.  Upon their arrival, Kirk and Spock meet a female Vulcan scientist named T’Mar, who plays a prominent role in the action-packed journey that awaits.

“T’Mar is the captain of the space station and was a childhood friend of Spock,” says Paramount Senior Vice President and Executive Producer Brian Miller.  “Her blend of incredible intelligence and unexpected beauty prove intriguing to Kirk.”

As the story progresses, T’Mar joins Kirk and Spock as they travel to New Vulcan, a planet that orbits a binary star and was colonized by Vulcans after the destruction of their home world, seen in 2009’s Star Trek.  There, they find Surok – a great Vulcan leader.

“When we crafted this story we wanted to make sure the player realizes that the usually logical, Spock can have very emotional connections to the ones he cares about,” adds Miller.  “Surok was one of Spock’s childhood mentors and is also T’Mar’s father. Together, they are helping to lead the colonization of New Vulcan.”

As the game progresses, players will learn that Surok is one of the lone survivors of a vicious attack on the New Vulcan planet by the villainous Gorn.  Why they have attacked and what they want are at the heart of STAR TREK The Video Game.

“Video games are not only exciting to play, they’ve become a compelling medium for telling stories, so with Star Trek, we had an amazing opportunity to introduce new characters that are integral to the plot of our game,” Miller says. “Our game’s story is canon to the new Star Trek universe, so we had a great responsibility to get these new characters right, and to make them exciting and meaningful to players.”

Throughout the story, both T’Mar and Surok play key roles in helping Kirk and Spock uncover more about the brutal attacks that the Gorn have been engaging in across the galaxy.  They also reveal that the Gorn have stolen a mysterious machine known as the Helios Device – one whose functions could prove disastrous in the hands of an enemy as ruthless as the Gorn.

“For players who want to simply enjoy the experience of playing as Kirk and Spock, Star Trek is going to be a great game experience,” Miller says. “But for those eager to dig deeper into a robust story, we hope it’s an adventure that will excite both longtime fans and game enthusiasts alike.”