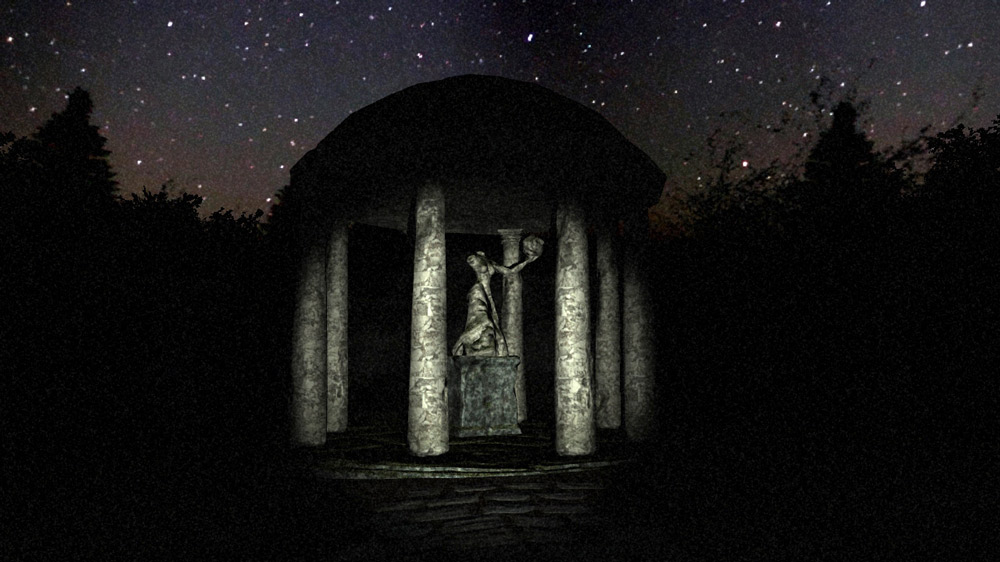 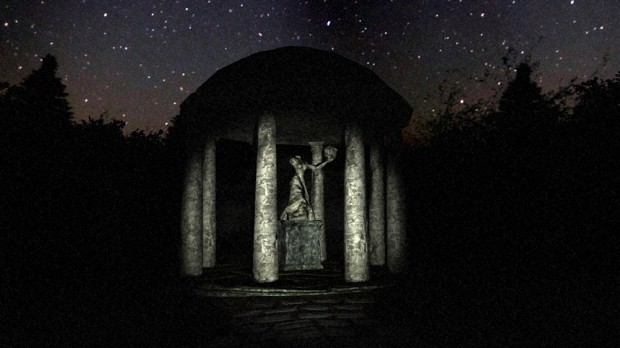 Milkstone Studios has released their latest title through the Xbox Live Indie Marketplace, named White Noise.  The premise for White Noise is simple, you are stuck in a grave yard, collecting eight tape recorders while being hunted by a vile creature.  What you really get with White Noise is an almost exact copy of Slender, but for the Xbox 360.  Milkstone Studios just changed the pieces of paper to tape recorders, some of the structures that you wander through, and Slenderman to a fairly generic looking supernatural creature.  If you ever wanted to play Slender from Parsec Productions on your Xbox 360, White Noise is the only way to do so.  For the rest of this review, I will focus solely on how White Noise is as a game by itself, and not how it compares to Slender.  Just know, if you have played Slender before and what that experience on the Xbox 360, White Noise is your game.

White Noise has very little back story in the beginning of the game prior to game play.  You get a small little text page about how a colleague of yours is helping you complete some paranormal research is a grave yard nearby.  Your colleague went out during the day to place eight tape recorders throughout the grave yard, in hopes of capturing the voices of the dead through the white noise that the recorders pick up.  However, your colleague has yet to return and you need those tape recorders, so you set off for the grave yard to recover them, armed only with a flash light.  Once you arrive at the grave yard, you almost immediately become hunted by an eyeless creature that will just stay out of flashlight range, long enough for you to see it.

That is the extent of the story for White Noise, there is nothing more that adds to this narrative during game play.  None of the tape recorders will play, nor do you find any hint of your colleague or what is happening in the grave yard.  White Noise, in terms of story, has the bare minimum.  Milkstone Studios sets up the narrative and then just lets the players play the game and create their own narrative throughout actual game play.  Normally, this would almost completely ruin a game for me, because I have always felt that games truly need us to care for the characters and the story for it to become truly a great game.  White Noise is one of those exceptions, you don’t need to have any type of growing narrative, because the game play sucks you in immediately with its atmosphere that you no longer care why you are collecting these recorders, only that you need to get all eight before the creature kills you.

Since White Noise has the bare minimum of story, it must survive on game play alone.  Games with a great story line can hid game play issues behind characters that we care about or events that draws us into the game.  On the flip side of that, games without a great story must have game play mechanics that is fun and immersive enough for us to forget the lack of depth in the story.  White Noise falls completely into the second category, with solid game play that just makes you come back for more.

The controls for White Noise is incredibly simple, you have a button that controls the power to your flash light, a trigger that allows you to run for short distances, while the sticks control your movement and look capabilities.  The battery only has so much life to it, so turning it off when you don’t need it will allow the battery to last longer, and keep you alive.

Game play is centered around the collection of eight tape recorders, yes, tape recorders.  I guess using digital recorders would have made the models too small, but I found it funny that the developers decided to use old style tape recorders for White Noise.  As you collect these tape recorders, you discover that there is a creature hunting you.  The entire object of White Noise is to collect all eight recorders before being killed by this mysterious creature.  Keeping an eye on the creature with the flash light will keep it at bay, but the creature will circle around to cut you off from the other parts of the grave yard.  You are completely defenseless against the creature, with no offensive moves nor weapons.  You can only run, and that is what adds to the intensity of White Noise.  The creature will stalk you from afar, causing a slow burning panic through the game.  If you don’t keep a close eye on the creature, it will sneak up for an instant kill, giving you a close look at it before the world goes black.

This is where White Noise really gets creepy – its visuals.  The entire game is based on the environment and atmosphere that Milkstone Studios creates to draw you in for the scare.  The grave yard is suitably dark, especially if you have your television set correctly for the game, forcing you to rely on your flash light for guidance.  As you search the grave yard, you come across ghosts that are wandering through the headstones.  These ghosts don’t attack, nor do they have any bearing on game play, but add another level to the ambiance of the game.  More then once, I mistook a spirit for the creature that was hunting me, just by seeing a flash of a human form on the edge of my screen.

The sound of White Noise also adds greatly to the game’s atmosphere.  The silence of the grave yard, with only the sound of your footsteps echoing off of the mausoleums, the sudden scream when you see the creature, and the sound of static as the creature gets ever so near.  Interestingly enough, the use of static in White Noise makes more sense than it did in Slender, since you are collecting tape recorders that are trying to collect this static.  Well played, Milkstone, well played.

White Noise, at the end of it all, is nothing more then a Slender port to the Xbox 360 with enough changed to keep the lawyers at bay.  It is, however, a damn good port of a damn good game.  The controls feels right as you move through the grave yard, and game play is unchanged essentially from the original Slender.  It is the aesthetics of White Noise that wins me over.  The game can be outright unnerving to play, with the slow burning tension that builds as you find more and more tape recorders.  While I wish there was more to the game then what there is, that isn’t a knock against Milkstone Studious, but more with the original game Slender.  Overall, if you are looking to play Slender on the Xbox 360, this is your only choice and it will do just fine.