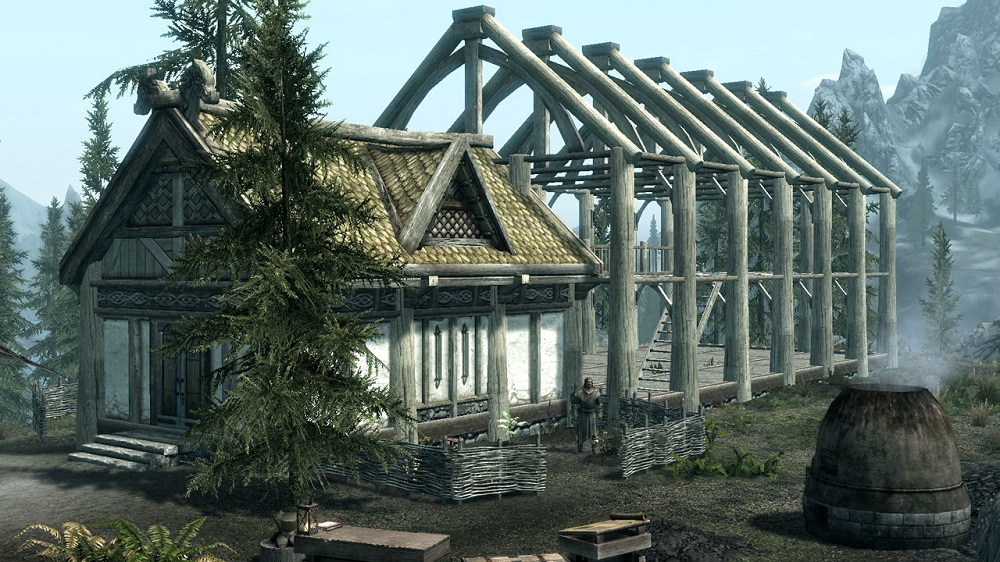 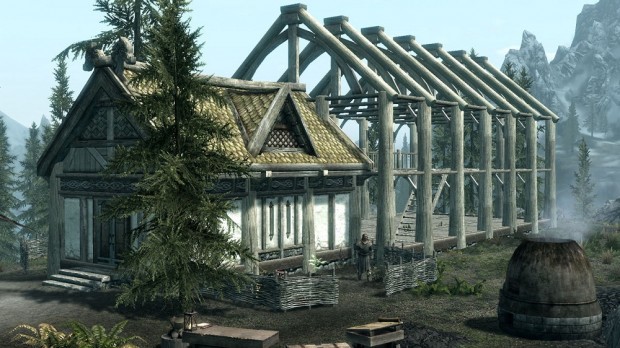 Bethesda hit a massive home run with last year’s Elder Scrolls V: Skyrim, which hit many critics top ten lists, if not made game of the year.  For this year, Bethesda has already given us a full expansion pack for Skyrim in Dawnguard, and now has released this add on, named Hearthfire.  Hearthfire is not an expansion pack in the terms that Dawnguard is, it adds some game play mechanics to the core game of Skyrim that the developers felt were missing when the original game was launched.  Hearthfire is centered around your home, in that you can build and customize the house that your character lives in.  If taken seriously, building a three wing house will take you a few hours, mostly in gathering the materials that you need.  Hearthfire isn’t going to hit everyone’s sweet spot, but for those of you that are interested, here’s what you get with the newest add on.

Hearthfire’s core mechanic is the new ability to buy one of three land plots and building a custom home for your character that you can quick travel to quite easily.  You must first get in good with the Jarl of one of three towns, either Dawnstar, Morthal, or Falkreath.  Once you have done enough quests for the jarl, he or she will offter to seel you land in their region for 5,000 gold.  This will set you on the new quest line to build and customize your new home.

Arriving at your new home’s location, you will see a blacksmith’s anvil, chest, carpenter’s table, and home plans.  The first part of the home is very basic and easy to build by just using the items found in the chest.  Once the home is built, you can go inside and design the interior of the home by building the furniture and other necessities that your character will need to live there.  Unfortunately, you have no say on where you are able to put things and have no ability to decide colors for any of your furnishings.  Once this small house has been completed, you then have the option to upgrade to the three wing house by adding in the main hall.

The large home expansion will now truly allow you to customize your house to fit your needs and desires.  You get to choose what goes into each wing of the large house.  Depending on how you built your character, you can choose to put in a library, alchemy lab, wizard’s tower, trophy room, or armory.  I was pleased with the amount of choices that I could build, but each wing has a specific set of types of rooms you can build.  I could not build a greenhouse and a wizard’s tower onto the same house, since they both required to be the west wing of the home.  For my first house, I went with the trophy room, armory and wizard’s tower.

Once each wing is built, you get to add in the furniture, just like you did in the small home.  Each wing will have  a set list of items that you are allowed to build within that wing.  For instance, the wizard’s tower focused on the building of an enchanting table, with some weapon racks and a mannequin, while the trophy room focused solely on building statues of creatures that can be found throughout Skyrim.  There is a lot of choices to be had here, and tons of storage for your items that you had gathered up to this point.  I was able to consolidate items from all three of my homes that I lived in prior to Hearthfire, all into my new custom home overlooking the lake.

Materials is going to be your grind for Hearthfire.  Clay and quarried stone can be found on your land very easily, and logs can be purchased from the closest saw mill to your home’s location.  Other materials, such as iron for nails, straw, glass, and goat’s horns, can be purchased from vendors within most towns.  If  you had been neglecting your blacksmithing skills, you will have them leveled up in no time making the necessary nails, fittings and locks for your new home.  Depending on what type of wing you decide to build, the other materials will become a little more exotic and may need some extra time to procure, such as an ancient Nordic bow for that Drugr display in my trophy room.

The other small part of Hearthfire is the new ability to adopt one of the orphans in the Riften Orphanage.  Once the add on has been loaded up, you will receive a message from a courier that the children are now available for adopting.  Before you go running of to Riften to add a small child to your household, you must have space in your new home available for the new rugrat.  This means you either must purchase the furniture from a steward for your existing home for 3,000 gold, or make sure your new home has the extra bedroom completed with bed and dressers.  The matron will not allow you to adopt if these conditions are not met.

One you have adopted your child, she will act in a similar style to your spouse, meaning that she will wander around your new home independently of what you do and occasionally interact with you.  Your child will sometimes ask for an allowance, a gift such as some new clothes or a doll, or want to play a game of tag with you.  Your child will even give you a small gift of a gem that she or he found while exploring their new home.

For 400 Microsoft Points ($5), you get what you pay for with Hearthfire.  If you tackle your one home seriously and adopt a child, there is maybe 3 to 4 hours of extra content here, and that is just in gathering materials to build your new home with.  If you build all three homes, then you can stretch that out to about then hours of game play, again mostly in just gathering the materials needed.  The ability to adopt a child is a nice touch, but adds nothing to the game play of the overall game.  While Dawnguard is a must buy for any Skyrim fan, Hearthfire is only a must buy for those of you that are die hard enough to want to build your own custom house and don’t want any new quests or actual content.  This is one of those add on packs that you will buy if what is above sounds interesting to you.  If it doesn’t then you won’t be missing out on anything crucial for Skyrim.