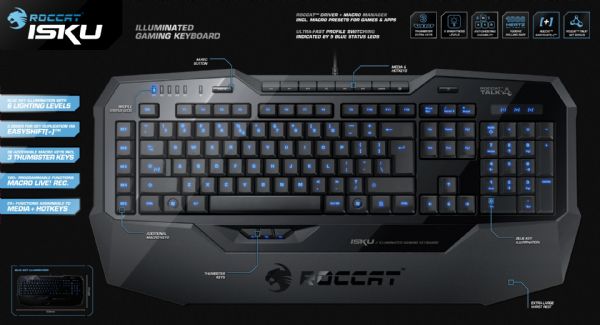 Hamburg, July 17, 2012 – ROCCAT, the German manufacturer of professional gaming accessories, is now Official Sponsor of the National ESL (USA) thereby strengthening the existing collaboration between the manufacturer and the gaming community.

The National ESL is part of the international Electronic Sports League and the number one eSports league in North America. Amateurs as well as pro-gamers compete head-to-head in the games League of Legends and Iron Lady.

Through its support of the League of Legends King of the Hill Tournament, ROCCAT is creating a new highlight for every participating Go4LoL league and Pro Series team. The playoff for the first King of the Hill title will be between the winner of the monthly finals and a Pro Series team. Prizes up for grabs include $1,000 plus five bundles each comprising a ROCCAT Savu Mid-Size Hybrid Gaming Mouse and a ROCCAT Taito King-Size Shiny Black Gaming Mousepad. In the months following, the respective winners will compete against a new Pro Series team – with the winner of this match then going on to play against the sitting King of the Hill in the hope of victory and winning the monthly prize of $1,000.

ROCCAT has been represented in the North American market since 2012 with an office in Los Angeles and has been playing right at the forefront of the global premier league of gaming peripherals since the release of its first gaming mouse in 2008.

Gaming gear for pros
At ROCCAT Studios in Hamburg, ROCCAT industrial designers are designing and developing peripherals in close collaboration with the global gaming community that are specially designed to meet the needs of gamers – and by supporting the National ESL, ROCCAT is again demonstrating its close ties to international eSports. As gamers’ primary tools, the mouse and keyboard are especially important both in terms of being a core part of gamers’ gear and for their success. ROCCAT products create the best possible professional conditions to achieve new and outstanding results.