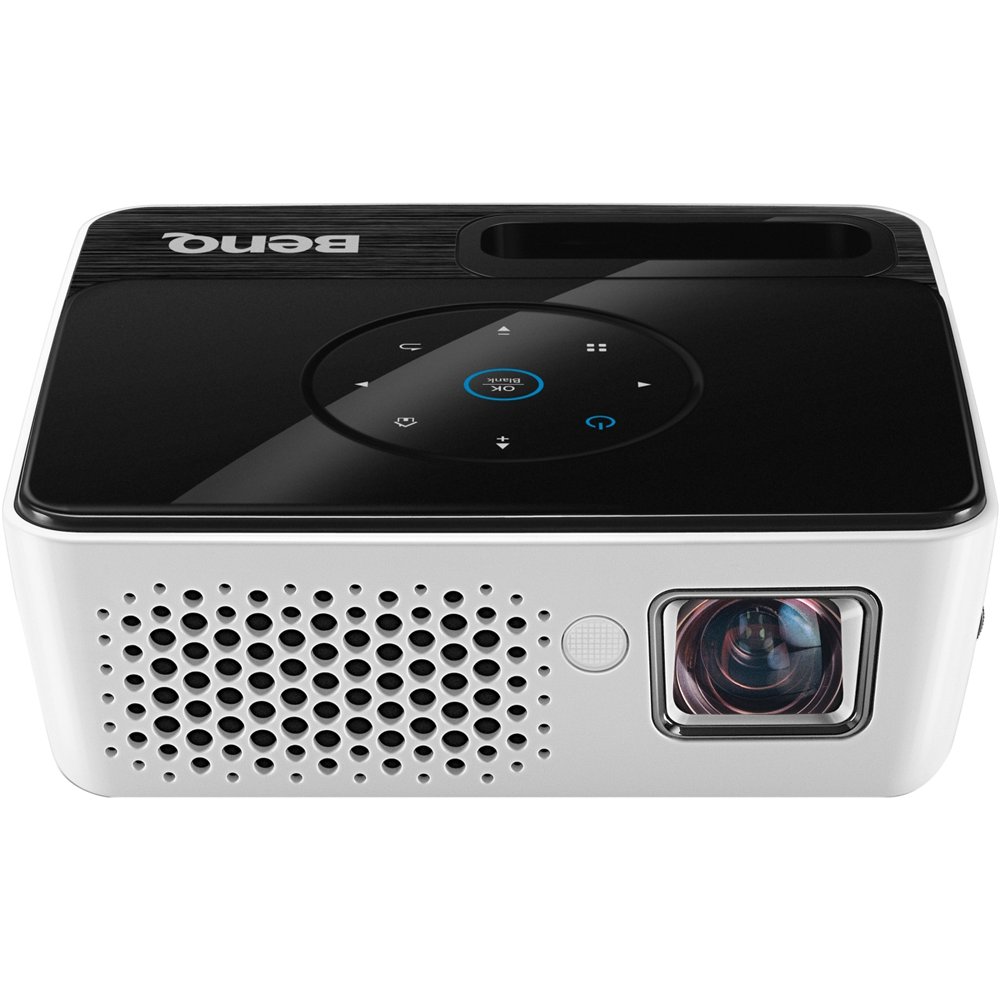 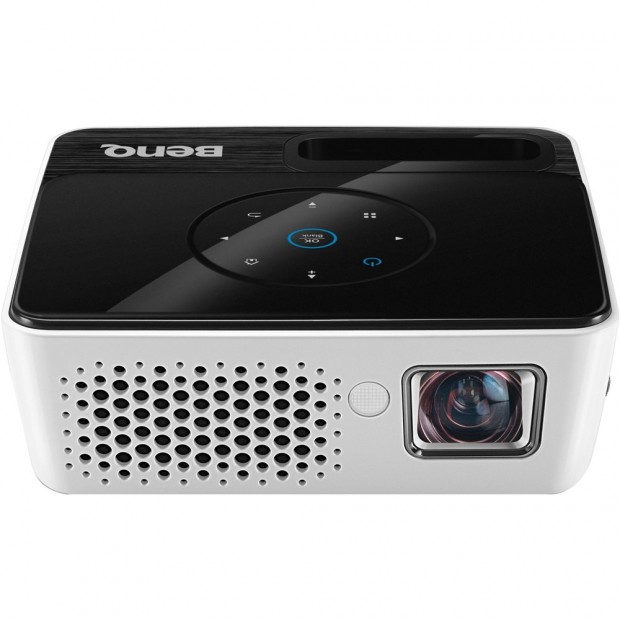 BenQ’s Joybee GP2 is a very small, easy to pack projector, measuring 2.1” x 5.5” x 5.1”. It also weighs a sleight 1.2 lbs, making it one of the most portable projector units I have used. While you COULD spend money on a “real” projector screen, I prefer the sheet-on-the-wall approach. I picked up a cheap, queen-sized, white sheet and hung it on the wall with some tacks. The bottom of the Joybee GP2 features a threaded hole for use on wall or ceiling mounts as well as a riser in order to increase or decrease the tilt of the projector. Optionally, BenQ sells a portable, rechargeable battery pack that can attach to the bottom of the projector, but I relied on the included AC adapter for power.

Most projectors require some time to warm up and cool down before powering on and off. The Joybee GP2 does not – the projector is up and running within seconds and powers down just as quick. This makes setup a lot easier than most projector units. After powering up, we were greeted by the vibrant user interface, which is simple to navigate via the projector’s radial touchpad or buttons on the included remote control.

BenQ’s Joybee GP2 projector features a multitude of inputs to get your video content onto the screen (or dorm wall) of your choosing. Built right into the top of the projector is an iPhone/iPod Touch dock. Simply plug your iPhone into the dock, choose the input from the Joybee GP2 UI menu, and off you go. It is just that simple. Aside from the built-in iPhone/iPod Touch support, the Joybee GP2 features an HDMI port as well as a SD memory card slot and even USB / mini-USB streaming. The projector also features 2GB of internal memory so that you can copy your videos, music, and pictures internally and take the unit with you. For such a small projector – you have a HUGE number of input options.

Once playing video, I was shocked at how nice the image quality was – considering the unit’s low cost and small form-factor. The Joybee GP2 will support 720p (at 1280×800), 1080i, 576i, 576p, 480i, and 480p resolutions. On the subject of “throw” (or distance from the projector lens to the screen), the Joybee GP2 will provide a 44” image at only 1 meter away! This kind of short-throw capability makes the unit perfect for small dorm rooms or classrooms. For my house, however, I wanted to get a slightly larger image experience. At its max-recommended distance, the Joybee GP2 can be 12.8 feet away from the screen and throw a 160.3” image. That’s HUGE. In my usage, I kept the projector about 9 feet away and enjoyed a roughly 100” image. The quality of my videos were consistently enjoyable and clear, thanks to the 3-LED, DLP projection system. Again, this is $599 projector, and I simply can’t believe the quality of this unit – especially when considering the price point.

The Joybee GP2 also features two internal 2W drivers for sound. However, for outdoor and home theater usage, I would not use them if you could help it. The volume is very minimal and a little “tinny” – but not the worst things ever. Also, the projector only features an IR port for the remote control on the front of the unit, which can make usage tricky if you place the unit away from you, closer to the screen.

There is also one very special use for a projector system like this: gaming. Utilizing the HDMI inputs, you can easily attach a game console or a computer to the unit and enjoy your games on a big screen. There was next to no input lag and I played a multitude of video games on it from several genres. The projector performed beautifully for FPS games as well as flight simulations. The biggest issue I encountered was keeping ambient light out. If you can accomplish this, however, you will not regret your purchasing decision.

For $599, the BenQ Joybee GP2 projector is a beautiful, easy-to-use, and compact projector system that is perfect for your home theater, dorm room, or classroom. I am having a blast using it and can’t recommend it enough. 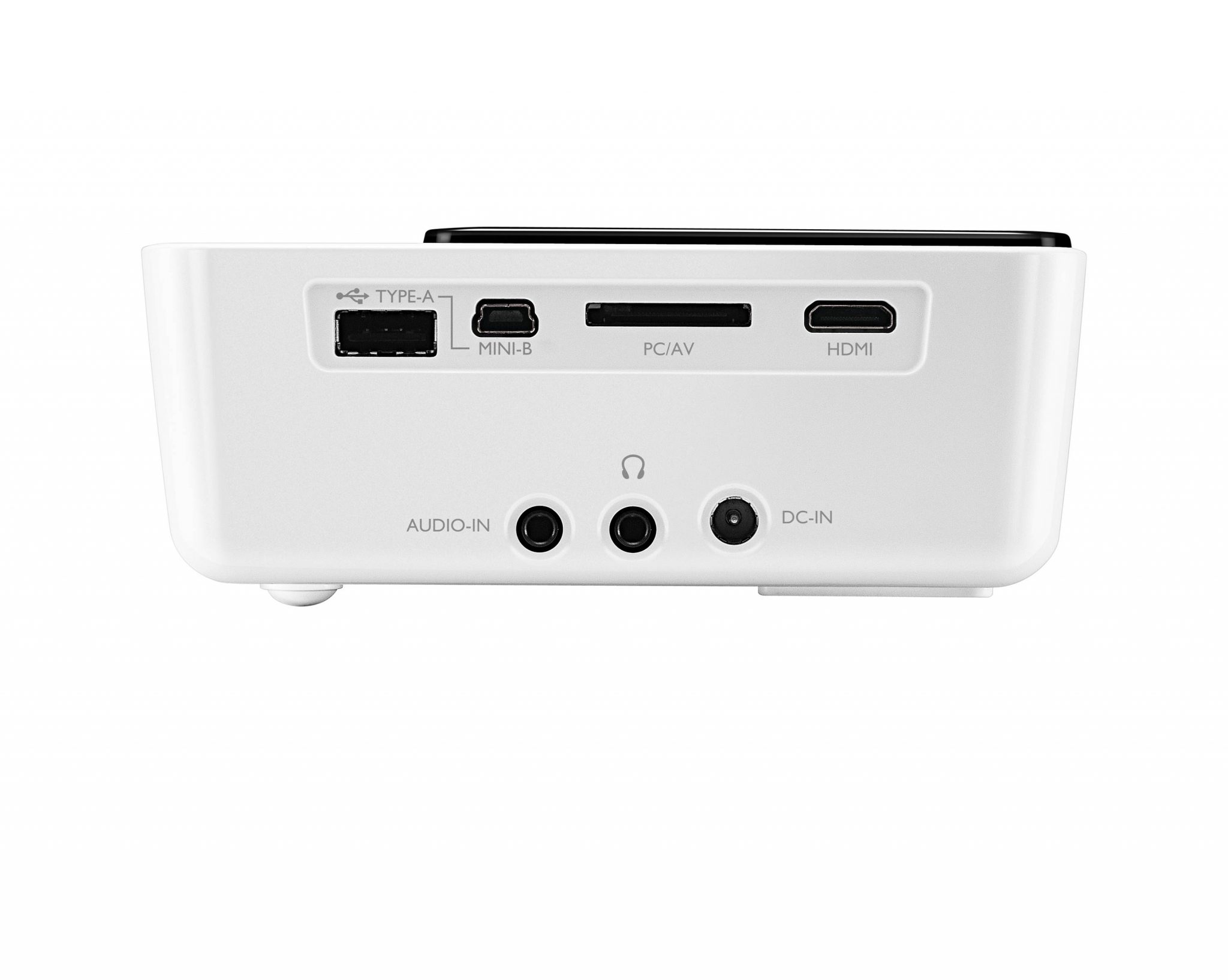 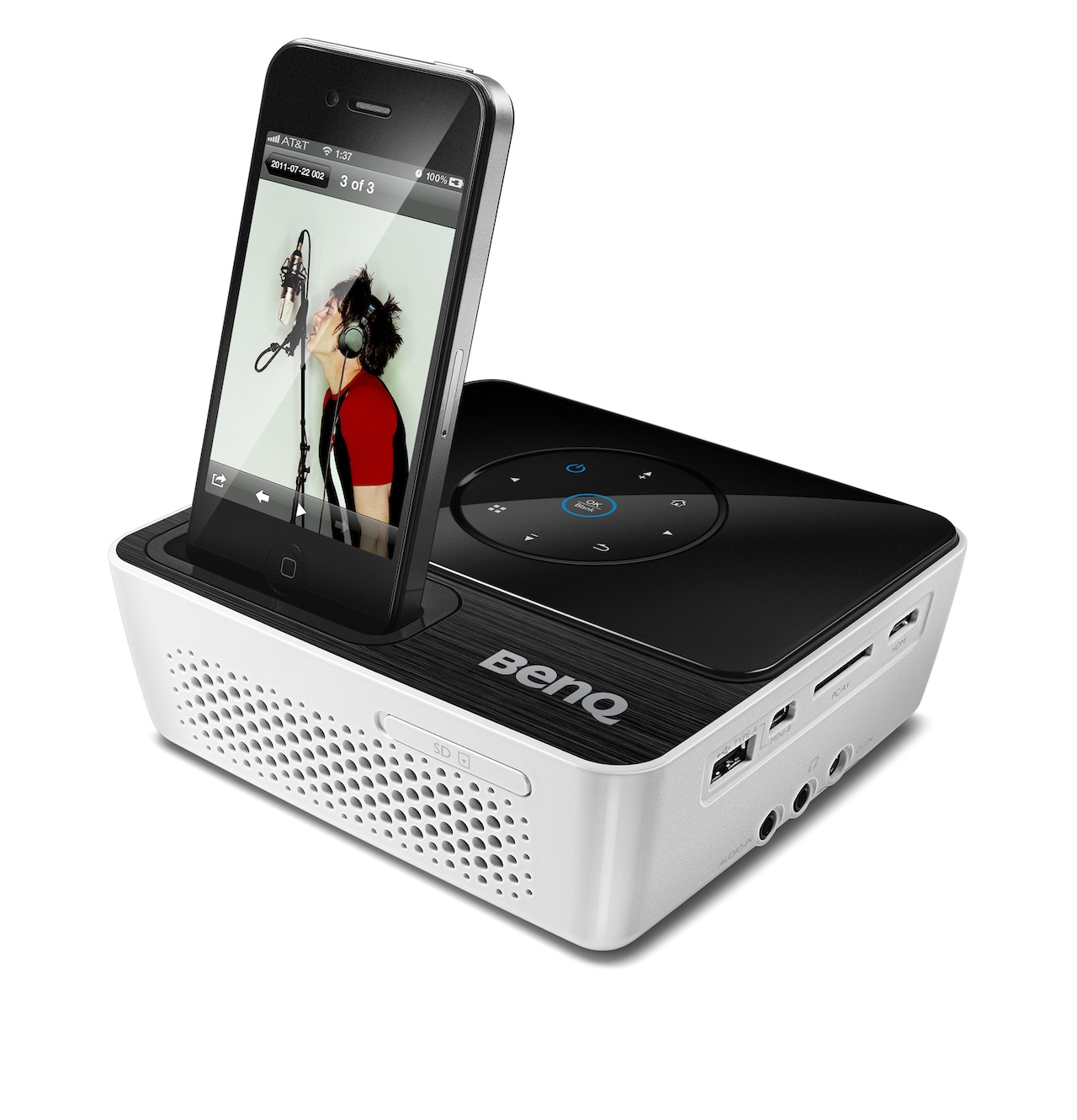