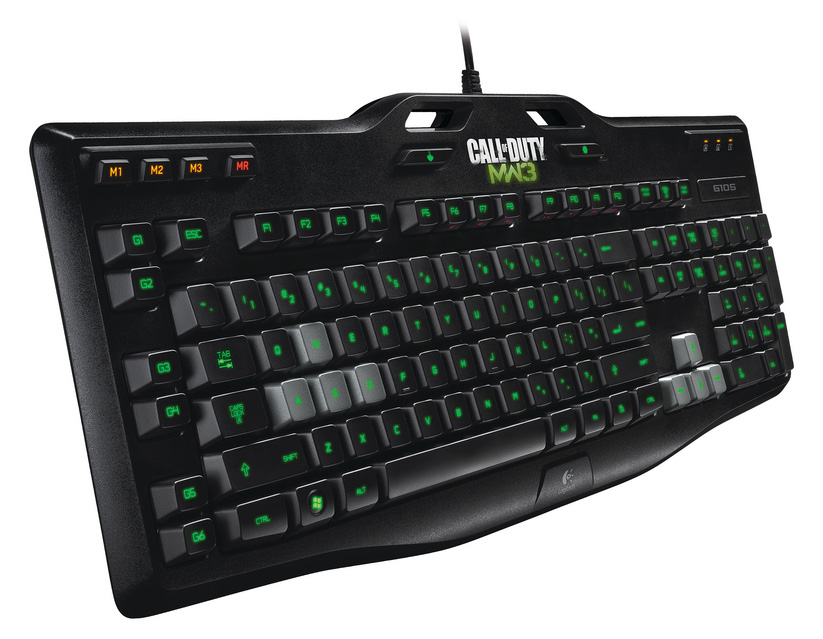 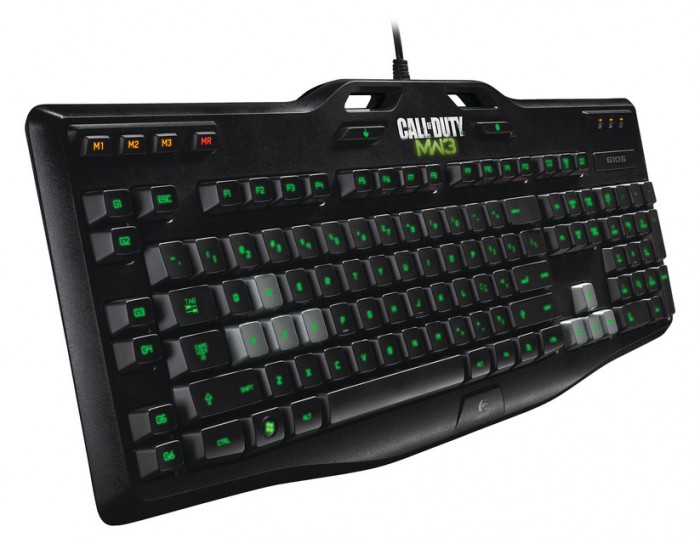 Logitech has unveiled the Modern Warfare 3-themed Gaming Keyboard G105 and Laser Mouse G9X. The keyboard retails for $80 dollars and is available now while the gaming mouse is scheduled for release in November. Checkout the full press release below for more information!

“The Logitech Gaming Keyboard G105 and the Logitech Laser Mouse G9X are perfect for Call of Duty: Modern Warfare 3 enthusiasts who want the best in precision and customization for their gaming experience,” said Chris Pate, senior product marketing manager for gaming at Logitech. “Both devices let you jump right into the action with the power to perform complex maneuvers with confidence.”

The Logitech Gaming Keyboard G105 – the official keyboard of Call of Duty: Modern Warfare 3 – lets you play long into the night with military-style, night-vision green LED backlighting. Featuring six programmable G-keys, each with three mode states, the Logitech Gaming Keyboard G105 provides up to 18 possible macro combinations per game. These macros let you perform single keystrokes or intricate multi-key combinations complete with mouse events, user-defined delays and repeating. New macros can even be recorded on the fly once you download the Logitech Gaming Software.

Multi-key input allows you to use up to five keys at once. You can perform multiple – and more complex – actions without the interference or ghosting that can occur on other keyboards. Plus, convenient media key controls put instant access to volume and mute, as well as start, stop, pause, forward and back functions, right at your fingertips. For added convenience, a game/desktop mode switch disables the Windows and Context Menu keys, so your game won’t be interrupted if you accidentally press the wrong keys.

The Logitech Laser Mouse G9X’s gaming laser gives you game-changing precision at hand speeds up to 165 inches per second on the most popular gaming mouse pad surfaces. On-the-fly, adjustable dpi takes you from pixel-precise targeting (200 dpi) to lightning-fast maneuvers (up to 5700 dpi) without pausing the action, while full-speed USB delivers performance at up to 1000 reports per second. The MicroGear™ Precision Scroll wheel is perfect for weapon selection – or switch to frictionless hyper-fast scrolling to fly through long Web pages when you’re not playing Call of Duty: Modern Warfare 3.

A weight-tuning system allows you to customize your mouse with up to 28 grams of extra weights that you can mix and match for more control. A custom color display also lets you choose the color of your LEDs from a wide color spectrum so you can match your mouse to your PC, your game, or your style.

Logitech is a world leader in products that connect people to the digital experiences they care about. Spanning multiple computing, communication and entertainment platforms, Logitech’s combined hardware and software enable or enhance digital navigation, music and video entertainment, gaming, social networking, audio and video communication over the Internet, video security and home-entertainment control. Founded in 1981, Logitech International is a Swiss public company listed on the SIX Swiss Exchange (LOGN) and on the Nasdaq Global Select Market (LOGI).